Chili Palmer (John Travolta) made the transition from loan shark to movie mogul with ease, but he has started to get restless with the film industry. He might be a power player within Hollywood’s elite, but Palmer wants another challenge, he just needs to figure out what to turn his hand to. When his friend Tommy Athens (James Woods) is killed, Chili decides he will pick up his fallen pal’s mantle, as a record executive. After all, he conquered the movies, so music seems like a natural next step. He even has his sights on his first breakout star, the beautiful songstress Linda Moon (Christina Milan). She is under contract with a lowlife at the present, but Chili is certain he can make a deal. Even if he is able to secure his potential star, can Chili master the music business, or more to the point, can he survive it?

While Get Shorty was able to do Elmore Leonard’s material justice, Be Cool never even makes an effort. Instead of a sly, character driven piece, we have a forced, slapstick experience. If you’ve ever heard Leonard talk about Be Cool, you know he isn’t shy with his distaste for the film and candid take on why it failed. His criticisms are valid, from the unfaithful to the source screenplay to the film constantly laughing at itself. The novel provides a can’t miss premise and great characters, but F. Gary Gray tries to drain all the intelligence and go for the cheap laughs. If you’ve read the book, some of the changes are just insane, not the least of which is how Vince Vaughn’s character is handled. Be Cool is a mess. Gray is unable to let the material speak for itself, which leaves us with an unfunny, even dull motion picture. So rather than waste two hours on this clanker, rewatch Get Shorty or just read one of Leonard’s books, as Be Cool isn’t worth the effort.

Be Cool is presented in 2.40:1 widescreen. This is a solid transfer and an improvement over the standard release, but it never really stands out. I found detail to be passable, but few scenes have that special sparkle that we want to see in HD, though as I said, depth is enhanced over the DVD. The colors seem fine, if a little off here and there, while contrast is consistent and effective. Not a bad treatment at all, but not a great one either.

The DTS HD 5.1 soundtrack is rock solid. Not a lot of chances to shine, but when the guns are pulled out and things heat up, the track is able to deliver. The music also adds a lot of life of course, even though the film’s sound design is all about the dialogue and such. No complaints in that area either, as vocals sound clear and never hindered. This disc also includes Spanish and French language tracks, as well as subtitles in English, Spanish, and French.

The most substantial extra is a twenty minute look behind the scenes, but it is promotional in nature, so of little interest. Several other featurettes are included, such as some cast profiles, but again, these are just to hype the flick and little else. This disc also includes a music video, some deleted scenes, a gag reel, and the film’s theatrical trailer. 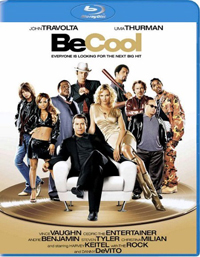