According to my records, “Zookeeper” came out in theaters on July 8, 2011, smack dab in the middle of the summer movie-going season and one week before “Harry Potter and the Deathly Hallows: Part II”. As of this writing, it’s September 22, 2011. Wow, eleven weeks from opening weekend to a Blu-ray in hand. Ok, enough about that. Kevin James has established himself as one of the foremost comics working today and though his run on “The King of Queens” might be over, it seems that his movie career might just now be blooming. James has had a notable hit a few years back with “Hitch”, teamed with some SNL alumni in last year’s “Grown Ups” and his “Paul Blart: Mall Cop” was an unexpected hit early last year. Is Kevin James the new Chris Farley? Though that point might be debatable, it’s clear that James is willing to take roles that aren’t all glitz and glamour (a zookeeper and a mall cop), but he makes them work for him. So when I popped “Zookeeper” in my player, I had no idea what to expect.

James plays Griffin Keyes, a zookeeper who really loves two things: his job and the animals he cares for. He’s just proposed to his girlfriend (Leslie Bibb) and has subsequently been outright rejected by her. Five years pass and Griffin is now the lead zookeeper working in concert with Kate (Rosario Dawson). Things are well and good until Griffin’s brother Dave (Nat Faxon) gets engaged. Dave mistakenly invited Stephanie (Bibb) to the engagement party and has thus rekindled all of Griffin’s feelings for her. Griffin wants to give things a second try, but doesn’t know how to do it. This is where the animals at the zoo become involved as he learns that they can, indeed, speak. Taking advice from Joe the Lion (voiced by Sylvester Stallone) and Bernie the Gorilla (voiced by Nick Nolte), Griffin embarks on a mission to get Stephanie back. As we might assume, he needs to use Kate as a date to get Stephanie’s attention and, wouldn’t you know it, there’s chemistry there as well. Whatever will Griffin do?

Ok, I almost turned off my TV when I saw that the animals were talking. I mean this isn’t “Dr. Doolittle” here. But I decided to give it a chance and I’ll have to admit that “Zookeeper” did have a few moments when I laughed out loud. I was impressed at the vocal talent assembled for the animals including Judd Apatow, Cher, Nick Nolte, Adam Sandler and Sylvester Stallone though I don’t know if they added much to the film. James’ blend of physical humor and genuine likability are what make the movie work and though the movie is predictable as they come, I still found it more entertaining than I thought I would. Look for bit parts by Joe Rogan (former host of TV’s “Fear Factor”) and Donnie Wahlberg. “Zookeeper” is clean enough where it’ll entertain the kids, what it was meant to do I’m sure, but has a few adult situations as well. I don’t envision watching this all that often, but I was pleasantly surprised – in a good way.

“Zookeeper” comes to Blu-ray in a 2.40:1 AVC HD transfer that’s very visually appealing. As we might expect from a new to Blu-ray film, there’s very little wrong with the transfer. There is an abundance of CGI effects with the talking animals and the stylized zoo looks clear and pristine. Colors pop and though the brown of Griffin’s shirt looks a bit on the dull side, it’s not a fault of the image. Detail looks great as well and the lack of any edge enhancement makes for a very nice, film-like quality throughout.

The included DTS HD Master Audio soundtrack has some moments that really stood out, but comedies aren’t really known for their robust soundtracks. “Zookeeper” sounds about as good as I’d expect and the score sounds reminiscent of some 90’s movies starring Adam Sandler. Vocals are clear and clean and I played a little game with myself trying to guess the celebrities that voiced the animals (Sandler and Stallone were the only ones I got correct). This is a good, solid mix that’s not too engaging but not bad in the least, either.

The movie, like some of Sony’s other titles, comes to disc in a few different formats. This is the two disc Blu-ray reviewed here with the second disc being a digital copy of the movie. There aren’t a lot of extras of note, no audio commentary can be found, rather a slew of featurettes on the animals and the more technical aspects of the film. We find these short segments cleverly labeled with “Laughing is Contagious”, “Bernie the Gorilla” and “Animal Meeting.” There’s really nothing of substance here in that we really don’t learn anything. It’s mainly just shots of James as he talks to props (that later represent CGI animals) along with a few scenes with real animals. The disc is also enhanced with Sony’s MovieIQ so you can get some real-time data via the IMDB and also learn a few tidbits about the film to boot. 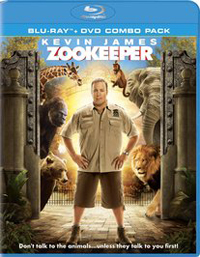