Yes, there’s actually a movie called “Beverly Hills Chihuahua 2”. So that means there’s at least one more incarnation in the “Beverly Hills Chihuahua” series. “Beverly Hills Chihuahua 2” started out with a more unbelievable and ridiculous setting then could be imagined even for a movie based on talking dogs. The first one was a bit hit and miss but by and large had a pretty good script. This one however, started with the wedding of Chloe and Papi and it was done out like a real huge expensive wedding that was very farfetched even for a movie like this. I guess this stems from personal opinions because the first was so good that when they went off the deep end with this one it just really took me for a turn that I didn’t expect due to the first one’s already set tone.

Admittedly, I handed this one off to my niece and I think even her eyes rolled (and she’s only six years old). I thought they had potential with this one, but with a straight to home video movie they cut out a lot of the stars and talent and I presume the original writers. *rolls eyes* If a third one ever sees the light of day I truly hope they invest more in the script and talent, as this franchise definitely had the potential after the first.

So what’s this one about you ask? Well, here’s a quick break down for you because that’s really all you need. Chloe and Papi get married and have a litter of puppies. Who are rambunctious as all get out, bad news comes in the way of their owner’s parents house foreclosure so they are set to raise the money and save the day. Drama comes along in the way of a bank robbery that they solve. Yeah, that’s about all you need to know.

“Beverly Hills Chihuahua 2” comes to Blu-ray in a 1.78:1 AVC HD transfer that, surprisingly, looks top notch. I hadn’t had the opportunity (well, I had the opportunity just not the desire) to see the first one, but I was pretty impressed with how this looked on the screen. Detail is impressive, colors are bright and bold and color saturation is spot on as well. Now, granted, you’re watching a talking Chihuahua on screen for 90 minutes, but what you’re watching does look pretty darn good.

You know what? I have to say that I was pretty impressed with the DTS HD Master Audio soundtrack as well. We get a pretty encompassing sound stage that resonates throughout all 5.1 channels. Dialogue, albeit dialogue coming from a canine, sounds pretty good. The lion’s share of the sound is in the front stage but surrounds chime in for some added “oomph.” Again, I consider the movie itself though sonically it does sound much better than expected.

Let’s face it, this movie is for the kiddies and most children won’t sit down and listen to an audio commentary. Well that’s good because there isn’t one. What we do have is a “Beverly Hills Chihuahua Challenge”, which is a long-winded way of saying there’s a trivia challenge. A music video by Bridgit Mendler is included as is an outtake reel. 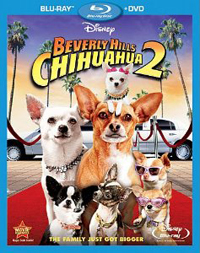