Chicken Little (voiced by Zach Braff) has had it rough ever since he was conked on the head and told everyone that the sky was falling. He was sure it was a piece of the sky that fell, but everyone one was convinced it was a mere acorn. The event turned into a phenomenon, with news coverage and even a movie made, leaving Chicken Little as a laughingstock. As time passed, he tried to move on and have a normal life, but around every corner, he was reminded of his past. Even his father Buck (voiced by Garry Marshall) tells him to just blend in and maybe everyone will forget, but Chicken Little doesn’t want to disappear. He knows that he was right about what happened and now, he wants to find a way to win back the hearts of those around him. In an unexpected turn of events, he joins the baseball team and against all odds, scores the winning run. Now he is back in the town’s good graces, but then, the sky falls once again. Now Chicken Little knows he was right and with an alien invasion on the horizon, can he convince everyone that he is telling the truth?

I think we’ve all heard the classic Chicken Little tale, but we’ve never seen it done like this. As per usual with Disney, some changes were made to the story, but in the end, the original spirit remains intact. This movie has a low profile, which is surprising for a Disney movie and in truth, it deserves more praise. Chicken Little isn’t perfect and even with an 81 minute duration, it uses filler, but it is still a very fun motion picture. I could get lost in these visuals at times, thanks to the depth on showcase. The animation is stylized, with incredible detail within the textures, like feathers, grass, and other surface elements. The depth isn’t just in details however, it is also in the layers of action within the scenes. There is always a lot going on and if you pay attention to the backgrounds, you’ll notice a lot of great moments. As far as visuals, this is just a creative and unique production, one that looks all the more impressive in this 1080p HD presentation. So in the end, Chicken Little might not be as epic as some of Pixar’s elite pictures, but it has heart and never fails to entertain. As this Blu-ray release has all the supplements of the standard disc, plus more and looks beyond great, I think an upgrade is more than justified.

Chicken Little is presented in 1.78:1 anamorphic widescreen. I’ve read some forums where it is claimed that animation doesn’t benefit as much from high definition transfers. While I agree that animation often looked superb on DVD, the benefits of HD are by no means minimal. As evidenced here, with Chicken Little being head and shoulders above the previous standard edition, with a much crisper and more refined visual presence. The detail is much improved, with more subtle touches revealed that really open up the visuals to a clearer, more immersive level. The colors have more pop also, with vivid hues that are a delight to soak in, while contrast is flawless throughout. This is simply an excellent transfer and while it doesn’t quite equal Open Season’s incredible effort, it comes pretty darn close to perfection.

An uncompressed 5.1 option is included and it sounds terrific, providing an active and well crafted soundtrack. This might be a family film, but it has ample surround presence. There is a lot of music and the surrounds help bring it to life, while numerous scenes offer added presence. The baseball game and the dodgeball sequence stand out as personal favorites, as all kinds of little touches are added in to enhance the atmosphere. If you’ve ever had a dodgeball barely graze your ear, you’ll feel like you’re back at that moment as you watch. The surround use is very natural and immersive too, never forced or hollow and that makes all the difference in the world. I have no complaints as far as dialogue either, as the vocals are loud and clear at all times. This disc also includes standard 5.1 tracks and subtitles in English, Spanish, and French.

I know there has been some backlash about Blu-ray releases not having all the supplements from the standard edition, but that isn’t a problem here. In addition to the goodies from the standard disc, this Blu-ray version houses even more extras, so fans are sure to be thrilled. A unique feature included is a Q&A session, in which you can ask preloaded questions about the production, with the answers popping up like trivia. You can pick and choose which questions are asked or you can select Autoplay, in which random ones are pulled out. Hatching Chicken Little is a collection of behind the scenes featurettes, which are passable, but offer minimal in depth insights. An audio commentary is also around, as director Mark Dindal, visual effects supervisor Steve Goldberg, and producer Randy Fullmer discuss the production. The session proves to be an informative one, as all aspects of the production are covered and you’ll learn a lot about how Chicken Little was created. In the case of deleted scenes, the original four are found here, complete with introductions, as well as four all new deleted scenes. You can watch music videos for One Little Slip and Shake A Tail Feather, in addition to karaoke and sing-a-long versions of One Little Slip.

Disney is taking some of their more recent animated films and putting them through the 3D process. While others will no doubt embrace this, there are those of us that felt more than satisfied with the somewhat “flat” nature of the 2D versions. Still, you can’t stop progress and it does look like 3D is here and here to stay. Having said that I do have to admit that “Chicken Little” looks pretty darn good when it comes to 3D. The same visuals that made the 2D version look so good are still present here and as 3D technology continues to improve, I’m sure this will look even better in the future. There are a couple of scenes that looked so good that I literally tried to reach out and touch the screen. I guess that’s a good sign when it comes to a 3D movie, right? I don’t want to say that this is an essential part of any 3D collection, but this movie has quite the following and if you don’t own the regular Blu-ray version, I’d pick this one up. 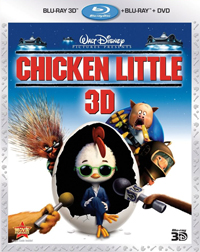