Movies about martial arts and I have never really mixed. I don’t really know why as I can appreciate how difficult it must be to make a movie of that genre. Still, it’s just never been up my alley. I remember about a decade ago when “Crouching Tiger, Hidden Dragon” was all the talk and I was excited to see it. I didn’t care for it. I wanted to like it, but didn’t. Yes I’ve seen the “classics” like “Enter the Dragon”, “The Seven Samurai” and “Yojimbo” (though I know those movies aren’t all about martial arts) and I just can’t really get into them. There are others, though, like one of the writers here at the site, who can’t get enough of them. So when I was sent a copy of “Bunraku”, I really wasn’t sure what to expect. I mean here we have a “martial arts” movie that’s on steroids and a cast that’s full of “A” list actors (or at some point in time, anyway). So what to do? Josh Hartnett and Woody Harrelson I like and Demi Moore is always nice to look at, even now, and I’m indifferent on Ron Perlman. Ok, let’s see what happens when I press “Play.”

A world without guns is a hard one to imagine. However this is the case and Nicola (Ron Perlman) is a very powerful man. He’s a mobster in every sense of the word and rules with a iron fist with the lovely Alexandra (Demi Moore) at his side. The man who does all the dirty work is Killer #2 (Kevin McKidd), who embodies his namesake and then some. To say this man has no remorse is somewhat of a understatement. This triad, along with some other assassins, is feared throughout the land. As fate would have it, a drifter (Josh Hartnett) comes through the saloon doors demanding a couple of things: he wants to kill Nicola and some whiskey (of course). He meets up with Yoshi (Gackt) who also has a beef with Nicola. The thing about ruling with an iron fist is that you tend to have a lot of enemies. I won’t divulge any other plot details, but let’s just say that chaos ensues and in somewhat of a visual blizzard we get some resolution.

I’m going to have to re-watch “Bunraku” as it’s a lot to take in. Not so much the plot, but more along the lines of everything going on screen. I’ve prefaced this review by stating my disdain for the genre and while not a true “martial arts” movie, per se â€“ it does have elements of that and several others mixed in. I’ve yet to see last summer’s “Cowboys vs. Aliens”, though I imagine that the two share some similarities. As I mentioned above, I’m pretty impressed with the cast and it’s good to see some well-known faces in a rather low-budget film. Now that’s not to say that it elevates the film to “A” list status (let’s face it, have you heard of “Bunraku”? Right.) but it’s a departure for me, personally. Fans of asian cinema might identify with this film and I might have to go back and watch some Jet Li or Jackie Chan movies after seeing this. It’s not quite what you’d expect and it’s a nice little movie that packs quite the punch (pun intended, naturally).

At the very least I can say that “Bunraku” is one of the most visually-exuberant films that I’ve seen in quite some time. It’s unique in the sense that “Sin City” is unique (also starring Josh Hartnett, ironically). The 2.35:1 AVC HD image is a bit grainy at times, though I think that was the intended effect. The palette is all over the place and though the movie has its share of darkness, they’re counter-balanced by the starkness and splashes of color in others. Fleshtones seem overall very consistent, black levels and contrast seem within normal limits as well. Detail seems very well-defined, though I caught some motion blocking on a few of the fight scenes. All in all, it’s a very…interesting transfer that’s certainly representative of a film of this nature.

Not to be outdone, the DTS HD Master Audio soundtrack has several moments in which it really gets to shine. The dialogue sounds very rich and natural. Naturally the track takes off during the myriad of fight scenes. I didn’t detect anything that really stood out as being memorable, but the mix did server its purpose. One thing about the fight scenes is that they’re stylized and the soundtrack does do a lot to heighten the mood.

The film obviously has a following though the lack of supplements won’t please die-hard fans of the movie. We get the original theatrical trailer with an audio commentary by director Guy Moshe and co-star Kevin McKidd. The duo don’t really enlighten us with too much about the shoot or the production details, they mainly just comment on what they see on screen. 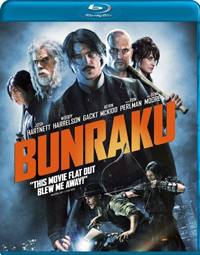