The films of 2020 were just unlucky. No one could have predicted what would have happened and the motion picture industry is one of thousands of businesses that suffered. Some studios have opted to release their movies direct to video/streaming services while others have released them theatrically only to have them arrive on disc shortly thereafter. Regardless of the case, I’d not heard of Come Play, but my wife loves horror (and is then subsequently scared after watching said genre) so I figured it was worth me requesting it. Perhaps going into this with an open mind and/or clean slate was best as the plot for this film sounds an awful lot like another recent horror film – The Babadook. I won’t expand on that, but after having seen Come Play, I’d recommend the latter.

Oliver (Azhy Robertson) is an autistic boy who uses his cell phone in order to communicate. His parents, Sarah (Gillian Jacobs) and Marty (John Gallagher, Jr.) are in the midst of a divorce. He’s the “cool dad” who shows up when it’s play time and she’s the one doing all the leg work. This has gotten to her. She loves her son, but resents having to manage Oliver’s condition. And he’s picked up on their stress. Oliver notices a new e-book on his iPad about a lonely monster named Larry. Larry is in search for a new friend that he can bring back to his dimension. Larry has targeted Oliver and, unless you haven’t picked up it yet, he needs to do anything and everything to avoid being dragged into Larry’s realm. Can he and/or his parents prevent this from happening?

Let me start with the obvious: is it really possible to be scared of a ghost from another dimension that has the name “Larry?” The answer is no. No it’s not. We don’t see a lot of said creature and I guess that’s for the best. It seems to be stop-motion and looks more like the character of Jack Skellington from The Nightmare Before Christmas. There’s a deeper issue here and it has nothing to do with horror. The issue of bringing up a child with disabilities. I think if that angle was explored a bit more, maybe we’d have a bit more compassion for the characters. But we get the requisite “kid who’s bullied at school, so we’re supposed to feel sorry for him.” I didn’t buy it. There’s really nothing wrong with this film, but there are others in the genre. As I mentioned above, go watch The Babadook instead. It’s better.

The majority of the film is dark. I mean that in its physical presence and in the tone of the film itself. The 2.39:1 AVC HD image seems to handle the majority of the film with relative ease, but I found a few scenes to be somewhat questionable. The outdoor scenes, what few there are, are shot under grey skies and give a very muted look. Detail is sharp and black levels seemed relatively strong. This isn’t something stylized like The Ring, and I guess it wasn’t supposed to be. I found the character of “Larry” to be more annoying than scary in terms of physical look.

The included DTS HD Master Audio mix has a few moments, as we might expect with any horror movie. And, to be honest, there was one “jump scare” that did get me. But those were few and far between and the majority of the mix is front-heavy with surrounds only occasionally chiming in. Vocals seemed strong and the score didn’t do a lot for me. It’s a good, but not memorable, mix.

This disc contains no supplemental features, not even a trailer.

I wanted to like Come Play and in a very weird way, I did. Was it scary? No, not in particular. I just found it a bit predictable (well, OK, the ending threw me a bit) and while not especially well-made, did manage to entertain me. Universal’s disc looks good, but the lack of any supplements might make this one a hard sell. 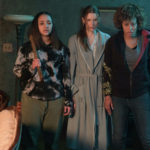 Toys of Terror (Blu-ray)
Next Article 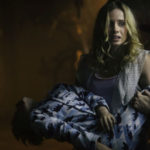