It’s difficult to believe that some movies ever get made. I’m not an insider into Hollywood, but I’ve been around long enough to know that it’s usually one person who’ll make the call. Movies are a business and that business suffered somewhat in 2020. But I have to believe that someone in their right mind didn’t sit down and read this script. And if they did, I hope they’re looking for a new job. It was noted that Linda Fiorentino won her role in Men in Black in a poker game. I can see things like this happening in Hollywood. So I can only imagine that someone must have thought that they had a really good hand and now we’ve got Toys of Terror.

The film opens as a mysterious woman drops off a trunk of toys at a children’s hospital. We then flash forward a few decades and meet Hannah (Kyana Teresa) and David (Dayo Ade) as they’ve just purchased the hospital and plan to renovate and sell it after spending the holidays with their children. It so happens that their kids and their nanny, Rose (Georgia Walters) discover, yep, the trunk of old toys. Alicia (Verity Marks), the daughter and Rose begin hearing voices. It seems that the building has a secret and the possessed toys have it in for Alicia and her younger siblings. Christmas is now a battle between the humans and the toys. May the better species win?

Toys can be creepy. Really creepy. Chucky from the Child’s Play films, Annabelle from those movies and that doll from Poltergeist. My skin crawls just thinking about that one. But, here’s the deal with Toys of Terror: it’s not scary. If anything, it’s funny. I think if the filmmakers had done this as some kind of horror/comedy like Krampus, it’d have found a much wider audience. But no, they tried to make it a true horror film and it simply didn’t work. None of the major elements are in play here. We don’t care about the story, we don’t care about the characters so why the hell should we care if haunted, stop-motion toys want to kill everyone? Let ’em! That ending I’d have been OK with.

Most modern films look pretty darn good when they get to Blu-ray or 4K (heck, even DVD’s look pretty decent). With that said, it kind of works against the film in question. Why? Well they opted to use stop-motion for the “toys” that in some other films might give them a creepy look, but here it just looks…dumb. Sorry, I wish I had the vocabulary to use another/better word, but that sums it up. Colors are bright and vivid, though the majority of the film takes place at night and the image is never compromised. Detail, black levels and the like are firing on all cylinders here. The 1.78:1 AVC HD encode will fill up your entire screen which is always nice. It’s a good-looking image.

The included DTS HD Master Audio mix has a few moments and with this being in the horror genre, I’m willing to bet that you’ll know what they are. Vocals are sharp and well-oriented, surrounds are used effectively, yet sparingly and the remainder of the mix is relegated to the front channels – as expected. There’s really nothing too memorable about this mix, it serves its purpose.

Toys of Terror is a bit like getting hit in the head with a board (and I’ve had it happen, it ain’t fun) – it makes for a somewhat interesting story, but ultimately it’s time of your life you want back. Warner’s disc looks and sounds good, but that doesn’t mean much when when what you’re watching makes you dumber as the film progresses. Stay away. 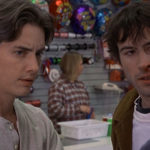 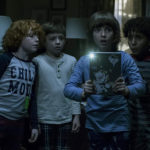