Freddy Heflin (Sylvester Stallone) is the sheriff of Garrison, New Jersey, a small town that is home to numerous police officers from New York. Heflin was never able to become a cop himself, thanks to his deafness and lack of physical fitness. Even so, he has always admired those who protect and serve, putting the profession on a pedestal. His kind nature and likable persona did allow him to live his dream in the end, as he was elected sheriff of Garrison. But in truth, he is a simple figurehead, as the other residents of Garrison enforce the law when needed, or break it if that is what they desire. So Heflin goes through the motions and tends to menial tasks, while the other law officers in town handle the real issues. He looks up to those men however, which causes him to look the other way when violations occur. When Internal Affairs officer Mo Tilden (Robert De Niro) rolls into town though, Heflin is forced to take a hard look at his heroes. Tilden has uncovered some links to a widespread corruption inside the NYPD, one that could shake the entire town of Garrison to its very foundations. As much as he respects these men, Heflin wants to do the right thing and he agrees to help Tilden’s investigations. Will Heflin prove himself to be worthy of his position, or will he be torn down by his own idols?

You want a dynamic cast? How about Sylvester Stallone, Ray Liotta, Robert De Niro, Harvey Keitel, Annabella Sciorra, Robert Patrick, and others, all in the same movie? Now what if that movie were made on a budget of just fifteen million, with most of the name actors working for scale, to keep the budget on track? Sounds like a cinematic miracle to me, the kind of movie that even the stars are willing to sacrifice for, to ensure the material is produced. Cop Land is loaded with talent and the stars really believe in the material, but in the end, the film wasn’t the kind of blockbuster the crew hoped it could become. But then with such a personal project, I would think the vision was more crucial than total profit. Cop Land is a tense, skillful motion picture that keeps you glued to the screen, thanks to excellent performances and direction. The cast is in top form here, with all the stars going the extra mile to make the material work. Mangold, who also wrote the screenplay, is able to make the most of his project, but some flaws do surface. But these flaws originate with studio interference, as opposed to Mangold’s own mistakes. This edition sports the director’s cut, which restores some of the changes, as well as a new transfer and some cool supplements. If you’re a fan of effective dramas, then don’t miss this new version of Cop Land.

It’s hard for me to get a grasp that “Cop Land” is now nearing its fifteenth anniversary. Time flies. The movie was one of the first day and date DVD releases back in 1998 and we now have a Blu-ray version. The 1.85:1 AVC HD transfer has certainly made some improvements to the overall image in regards to clarity and detail. Colors are a bit on the more mundane side with the darker side prevailing. Black levels are on the mark and as I’d already mentioned, the detail is certainly noticeable (just take a look at Ray Liotta’s face). There are a few compression issues and there’s a bit of grain throughout, but I don’t really think it’s a fault of the transfer.

Likewise the audio has also been upgraded and the previous Dolby Digial 5.1 soundtrack has been replaced by a DTS HD Master Audio mix that’s surprisingly good. I’d forgotten about some of the key moments in relation to the audio, but after watching this again I’m impressed. While this doesn’t hold a candle to some modern-day releases, it’s a strong mix that benefits from the new uncompressed soundtrack. Dialogue is at the heart of this film and though Stallone tends to mumble his lines a bit, it’s not all bad. The front stage takes the burden, though I was surprised at how active the surrounds were and the LFE get involved near the end. This is most certainly an improvement over the previous 5.1 mix.

As with a lot of these new issues by Lionsgate there’s good news and bad. The good news being that none of the supplements from the “Collector’s Edition” DVD from 2004 have been lost, but bad in that no new ones are here. We start off with an audio commentary, as director James Mangold, producer Cathy Konrad, and stars Sylvester Stallone & Robert Patrick lend their memories. The session is one of the better tracks I’ve heard of late, with an open and candid discussion of the production, as well as its box office result. No one avoids the tough topics, but there is a sense of humor and warm tone to the track, a most worthwhile inclusion. This disc also includes some deleted scenes, a storyboard comparison, and a brief behind the scenes featurette. 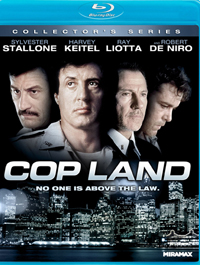