I’m not really into movies where animals can talk. Yes, there’s “Animal Farm” and naturally most animated films these days have animals as the stars, but as far as a “live action” movie goes – well that’s just not really my cup of tea. As I approach my 37th birthday, movies about a talking band of guinea pigs aren’t too high on my list. Did I say that already? Let’s just say that I’ve never seen the appeal of any sort of voiceover where a celebrity provides the voice. I mean, did Cameron Diaz really need to be paid $10 million dollars for her work in the “Shrek” films? It’s her voice! How many other actresses out there sound exactly like her? Nevertheless, the target audience for “G-Force” is not me and I’m fine with that. I don’t know if I’d have been the right demographic even when I was five years old, but I digress. Movies like this make a lot of money and even though I’m not a parent myself, I’m sure that parents everywhere will breathe a sigh of relief if their children can be entertained for a few hours.

Now the hard part…what’s “G-Force” about? Hmmm…yes, that is an interesting question isn’t it? Well, essentially the government has figured out a way for animals to be understood by humans. This was done (and to a far better and funnier effect I might add) in “Up” in which the dogs had a collar that translated their voices into those that humans can understand. Well the same effect applies here except where we had dogs in “Up” we have, you guessed it, guinea pigs. So the project that has allowed the guinea pigs to be able to talk is nearly out of money because someone messed up. It’s up to the guinea pigs to make things right else they’ll go bye bye. Yes, I did amazingly sit through this film and as much as I disagree with stars providing their voices, I did catch Nicolas Cage, Steve Buscemi and Tracy Morgan (there are a few others, I’m sure). Bottom line, your kids will like it or at least be entertained – you won’t.

Disney usually does their titles right and this is no exception. The 2.40:1 AVC HD transfer looks about as good as I expected and with as much CGI on the screen, it was handled pretty darn well. I saw no signs of artifacting, even the movement of the CGI guinea pigs was very smooth. Colors are bold and bright and detail is amazing too (just look at the little hairs on our little stars). Suffice it to say that what this lacks in plot, it makes up for in video presentation.

As we might expect, the DTS HD Master Audio track is another good example of how something can sound so good, if only you take the time to not listen to the words. Yes, the LFE get involved and the speakers do get a workout. Seeing as how this target audience is for a much younger audience, I doubt that the kids will notice the subtle nuances that are provided. Nevertheless, they’re there and it is a fairly good-sounding track.

We don’t get a whole lot of supplemental material, but we do get some outtakes, six deleted scenes, some music videos and a tour with “Blaster” as he tells us how the kids can become a member of G-Force. The 3D Blu-ray version does have a Cine-Explore with Darwin, Blaster and the creator. We get a PIP commentary and though it’s doubtful that the children will ever watch this, it’s there nonetheless. We get a look at some of the CGI work and a tour of the FX department. This disc does contain a standard DVD as well, which might come in handy in case you ruin the Blu-ray side from over-viewing.

Disney is going through their vault and is releasing some of their more recent titles in 3D. This is good in the sense that it might give some a chance to re-discover (or discover) some titles they might have missed on the first go-round. It also might be bad in the sense that seeing it in 2D was more than enough the first time. “G-Force” in 3D is certainly an experience and while not the best experience for me in regards to 3D, maybe these little things were meant to be flying off the screen as I seemed to get a bit more enjoyment out of the movie with an added dimension. The overall clarity of the image is still consistent with the 2D Blu-ray version, though I did notice that the effects were a tad bit more visible. Still I’m not entirely used to viewing my movies with a pair of sunglasses on, and it’ll take some getting used to for sure. If I was able to get more enjoyment out of this movie in 3D then I’m sure others will as well. 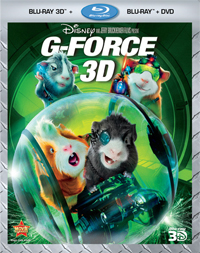