I suppose, when it all comes down to it, there’s really only two major opposing forces in our lives. God and the Devil. Now this is assuming that you believe in that sort of thing, but the majority of us do. And really, onc can’t exist without the other. Religion (that’s to say God and the Devil) have been a prevalent theme in both books and movies for quite some time now and I don’t see that trend waning. What the movie “Devil” tries to do is tell us that the Devil is always around and sometimes surfaces just to stir things up. And while I’m on somewhat of a religious tirade, I have to say that we’re all sinners. There was one perfect man and he died over 2000 years ago. So the characters in this film have that to deal with as well as one another. Do you believe in the Devil?

We meet our main characters right off the bat starting off with Det. Bowden (Christopher Messina) whose lost his family in the past by a drunken driver. He’s hit rock bottom and is trying to put the pieces of his life together. While investigating an attempted suicide, a group of strangers get into an elevator. We don’t know them and they don’t know one another. But when the elevator stops, tempers start to flare and, well, things to start to go awry. Never fear, though, because the security guards are on it! Lustig (Matt Craven) and Ramirez (Jacob Vargas) can see the elevator and talk to the passengers, though they’re unable to be heard. Now this is all well and good (well, ok not for them) but when people start dying, things get cranked up a notch. Couple this with the fact that Ramierz sees the devil in the tape and is predicting what will happen. So will the devil have his way with the passengers and kill them all or is one of the passengers the devil him(or her)self? Inquiring minds want to know.

I’ve got nothing against a movie like “Devil.” It’s fun and its harmless and I’ve seen movies like it before. I did get a bit of “Final Destination” feeling about it, but the filmmakers did try to develop a bit more cohesive plot around this rather weak premise. I mean, let’s face it, if the Devil is as powerful as he’s been made out to be in the Bible, books and films, would he really need to go through the trouble of killing people one by one? Somehow I don’t think so, but it’s hard to have a 90 minute movie if that were the case. I have to admit that the premise is a bit “been there, done that” but I did still jump at a few scenes. Yes, the characters were paper thin and a bit stereotypical as well but we’ve got to hate those that will eventually die, right? Still, I was slightly entertained and if this movie is your cup of tea then you’ll be right at home here. Not to say that this movie didn’t resonate with me at all, but I might take the stairs for a few weeks.

The 2.40:1 AVC HD transfer is pretty appealing and we get the full benefit of the Blu-ray experience in this one. Towards the middle of the movie, the main characters begin to sweat and we can see each individual bead on the actors’ faces. We see the five o’ clock shadow of Det. Bowden and even the faux marble grain on the interior of the elevator. The movie is somewhat dark in tone, though contrast and black levels seem to be on par with what we’d expect. I noticed no artifacting and instead was impressed by a very high-quality overall look and feel to this film.

“Devil” has a pretty robust DTS HD Master Audio soundtrack that comes into play and did its job well. As with most horror movies, there’s always a few moments when a character turns around or something unexpected happens and we get the accompanying loud bang/crash that makes you jump. That happened and the intended effect worked on me…once. Dialogue is clear and free of distortion with the surround effects coming into play a few times. There’s a lot of dialogue throughout, namely between the people in the elevator and the security guards. “Devil” isn’t the most robust soundtrack out there, but it does have its moments.

The supplements are kind of sparce in that we get a trio of featurettes and some deleted scenes. Universal has BD-Live enabled this disc and it’s D-Box motion controlled as well. With the film being so short, I’d have liked a commentary track but alas… 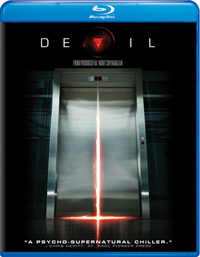