You’re scared, nervous and intimidated. Yes, it’s time to meet the parents. Jay Roach’s movie depicts just about everything that can go wrong about one of the most dreaded events that a human can ever endure. Everyone has parents, but what is so unnerving about meeting your future (hopefully) in-laws? For Pam (Teri Polo) and Greg “Gaylord” Focker (Ben Stiller), they find out exactly what is in store for them. Greg, a male nurse, has been led to believe that Pam’s parents (played to perfection by Robert De Niro and Blythe Danner) are average and ordinary. Little does he know that Jack (De Niro) who is supposedly a retired rare plant dealer is actually still very much active in the CIA. Jack has scared off many of Pam’s boyfriends, as he doesn’t want anyone to marry his first born daughter. It’s only after that they guys have given up, that he befriends them. Ben Stiller is perfectly cast as the unfortunate Greg. Having aced the MCAT (the test you take to become a doctor), Greg has decided to forego the MD route and become a nurse. He feels that he has a better chance to interact with the patients and avoid the bureaucracy of being an actual doctor. Having only known Pam for 10 months, Greg is ready to take the plunge into marriage, but is saved at the last minute when Pam announces that their sister is getting married. Normally it’s just good news, but she announces how proud she is of her sister’s fiancÃ© as he asked for her father’s permission first. Greg then feels he should do the same, so it’s off to meet the parents…

As I mentioned above, this movie depicts about everything that can go wrong when doing something like this and it all starts in the airport. Greg is trying to carry on a bag that is just a bit too large for “carry on” status, so he has to have it checked. They lose the bag containing his engagement ring to Pam (of which she has no idea), and all of his possessions are in limbo. After meeting the parents for the first time, things go from bad to worse. Greg can’t smoke (Jack sees it as a sign of weakness) and Pam announces that Greg hates cats (and we see how attached Jack is to his cat…more on that later). So it’s two strikes right off the bat for Greg. He feels as though he’s being scrutinized at every turn, and every answer he gives seems to be the wrong one. The only reassurance comes from Dina (Blythe Danner aka Gwyenth Paltrow’s Mom) and Pam, who have become so used to Jack’s antics, it’s now second nature to ignore them. Though the visit is only for a weekend, Greg feels like it’s a lifetime. Everything is going wrong from losing the family cat, to knocking over an urn containing Jack’s mother, Greg feels like it’s better if he just lays low and doesn’t say any more. Eventually it comes down to a matter of trust. Jack has let Greg inside his sacred “circle of trust”, but once outside of that-he’s out.

Some of the funniest parts of the movie are in passing. The entire family meets Kevin (Owen Wilson), an ex-fiancÃ© of Pam’s who met Jack at Lacrosse Camp. Kevin is so amazingly perfect it’s disgusting. Pam had mentioned to Jack that their relationship was purely physical and now Kevin has hit it big on Wall Street. The guy can do no wrong. Kevin is by far my favorite character in the movie as he steals scenes from De Niro and Stiller. He has this “aw shucks” attitude about him that drives Greg crazy, but everyone else can’t help but to love him. As things start to spiral faster and faster downhill, Greg is finally forced to leave. He doesn’t know what the future holds for him and Pam, or if there will be a future at all. While Meet the Parents has its share of physical comedy, it’s the chemistry between Stiller and De Niro that make it all work. Ben Stiller is someone you either love or hate, I personally love his comedy, it’s so low key that you don’t catch a lot of the humor on the first viewing. I think he says “Oh” more than any actor in history, too! With De Niro, you just expect him to start going into one of his mafia roles that he’s become so famous for, but with his retention, he’s one of the brighter spots in the movie itself. I really can’t say enough about this movie, other than the fact that I wish I would have seen it at the theater.

“Meet the Parents” and its sequel “Meet the Fockers” have been consciously absent from the Blu-ray format for several years now, but with the release of “Little Fockers” this must have prodded Universal to release this and cash in on the newest movie. What’s this doing in the video section? “Meet the Parents” has always looked good, never great, but good. The VC-1 HD transfer has given way to a bit more depth and detail, but the movie has had some DNR added to it which gives off a not to good impression. I’m all about making films look their best, but sometimes a bit of grit and grain is better than a falsified image. Case in point, I prefer the 60Hz TV’s over the 120Hz “smooth” motion ones. It just gives off a weird look and feel to the entire movie. “Meet the Parents” doesn’t look bad and to the common person who buys this disc, they really won’t notice but suffice it to say that those of us who really critique image and sound quality – this is a sub par effort.

The DTS HD Master Audio track isn’t one that will exactly light up your system, but comedies aren’t really known for that in the first place. The movie is mainly dialogue-driven (“I will be watching you, Greg.”) and it sounds nice and natural. Certainly there’s no loss here, just nothing that screams HD audio. There are a few scenes, like the volleyball one, in which the surrounds kick in but not often. This is your basic audio track with not much else to say.

“Meet the Parents” has previously been released in two different editions, both in standard definition. The first had the lion’s share of supplements while the “Bonus Edition” had some deleted scenes thrown in with a free movie ticket. This version seems to take the bonus material from the original DVD and has offered nothing new for us. We start off with the same two commentaries with director Jay Roach and Jon Poll (editor) and the second with Ben Stiller, Jane Rosenthan (producer) and Robert DeNiro who makes this track. The remainder of the supplements are taken right off the first DVD with the “Spotlight on Location” with some behind the scenes footage. We get some deleted scenes, outtakes and the Robert DeNiro’s infamous singing. We get a historical look at the lie detector, “Silly Cat Tricks”, a profile on director Jay Roach as well as the theatrical trailer. The BD-Live functionality currently only features a link to the trailer for “Little Fockers.” If you own the DVD, you might want to just keep that and pass on this as there’s nothing really new to tout here. 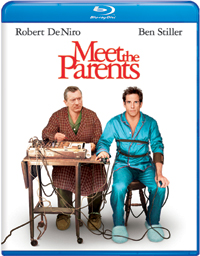