When tragedy struck on November 30th 2013 with the death of Paul Walker, the production of Furious 7 was put on hold. Walker was killed in a car crash along with the driver. I’m still in shock over his death, and the impact it has on his co-stars was obviously something nobody could’ve anticipated. It was reported that Walker had finished most of his action scenes, but portions of the film had to be reworked. This included the use of CGI for several scenes and Walker’s two brothers stepped in as well. While his character Brian O’Conner was pushed to the side a bit in the last chapter, he was still very much a central character to this series. The film was delayed from its original summer 2014 release date to April of this past year. The delay was largely due to finishing the film properly. Admittedly, the film can be hard to watch at times, but the delay has helped ease the sting of his death a bit. The film managed to turn a huge profit at the Box Office, and the inevitable 8th chapter has already been confirmed. While I think this chapter ended on a perfect note, it’s clear there’s no stopping this series. I suppose that’s the way Walker would’ve wanted it as well.

I had an idea in my head about doing bullet points for the pros and cons of this film. Then, after a second viewing, I realized that it not only holds up surprisingly well, but my minor complaints from my first viewing had gone away. The film begins with Owen Shaw’s brother Deckard (Jason Statham) seeking revenge for what happened to him in the last installment. It’s clear Deckard means business after he effortlessly kills several men with little effort. We feel his threat early on. Deckard and Hobbs (Dwayne Johnson) also have an early fight scene that leaves Hobbs in the hospital. Fans will likely take note of how little Johnson is given to do here. While there are plenty of other characters and story to keep the film busy, it’s not a huge problem. A big reason for his smaller role here might also have played into the fact that Johnson was busy film Hercules that scheduling conflicts played into it. Anyhow, Deckard has a personal vendetta against Dom (Vin Diesel). He sends his a bomb and during a funeral sequence, a chase between Dom and Deckard ensues. The two have a confrontation before Frank Petty (Kurt Russel) shows up. Petty is after Deckard Shaw, and makes a deal with Dom. Petty is after “God’s Eye”, a computer device that Shaw possesses. With the advancements in technology, Petty says that he can give Dom Shaw if Dom agrees to work with petty. The plot works well here, but it’s the daring action sequences and little character moments that propel the film. If you thought the stunts in these films couldn’t get any more insane, then you’re in for a surprise. Director James Wan had his work cut out for him when he took over for Justin Lin, but he does a great job here. Lin directed several of the Fast films, but Wan feels right at home. All of this works to create what’s arguably the best installment in this series. Of course, we all know that this is Walker’s last outing, and the film sends his character off in the best way possible. It’s likely there will be many teary eyes by the time the final credits come around.

I mentioned having some nitpicks with this film on my first viewing. While they seemed to go away on the second viewing, the film still isn’t perfect. For one, the pacing is a bit off at the start. It’s never boring (how could these movies be?), but it has so many story threads to tie up that it takes a while to get to the meat of the story. Secondly, it’s too long. This is especially true of the extended climax that involves a helicopter chase, and an elongated fight between Dom and Deckard. Many will also try to nitpick the scenes with Walker and the scenes where CGI had to be used. Truthfully, it all looked fine to me. I noticed a few moments, but I tried to just let the film do its thing and not overthink it. That’s the way that proves most effective. Obviously, the touching finale moments of the film had to be arranged to properly say goodbye to his character, and the film succeeds remarkably there. It’s not every day that a film series has to take on such a heavy load, but they do it perfectly. Truthfully, the entire film still feels very complete. It’s almost as if Walker’s character was always being retired. As this concluded, it didn’t leave me wanting more in the way that the last chapter did. I realize this is largely due to the chemistry between the cast, especially Walker. Every character is given something to do. Nobody is shortchanged here. I sometimes realize after I’ve reviewed a film that I wish I had mentioned a certain point, but didn’t. I could praise this film for many things, but seeing it is the real treat. I can only say so much, eventually it’s the act of sitting down and watching a film for yourself that really counts. Furious 7 comes highly recommended.

*There’s an extended version included along with the theatrical cut. Since the difference is so minimal, you might as well opt for the extended cut since it only adds to the film.

One thing about Universal, they deliver strong transfers on a regular basis. This is no exception. The 2.40:1 AVC HD image delivers sharp, strong colors consistently. The film has many scenes that take place in sunny areas, but that’s never a problem as it stays sharp throughout. There are plenty of nice visuals during the film and they lend themselves nicely to the HD format here. The CGI with Paul Walker is so seamlessly integrated into the film, it’s not even noticeable. Background shots show strong detail as well. Flesh tones are nice and smooth and the print used is pristine. This is picture perfect transfer.

The DTS HD track is also a winner. It may even be TOO good, if that’s possible. I had to keep my player at a low volume because this was constantly strong and involving. Rear channels remained active throughout and the bass added a nice rumble to a number of scenes. Vocals were always clear and concise with zero distortion. There’s plenty of background chatter in a number of sequences, one of which is a nightclub scene. This is a nice, balanced track that puts your system to good use.

Funny, sad and action packed. Furious 7 is the perfect summer blockbuster. It’s also so much more, more than anyone could’ve anticipated due to the shocking death of Paul Walker. This likely would’ve been just another entry in this long running series, but it hits closer to home, and carries serious emotional weight. While I think that it concluded perfectly and feels very complete, there are still more chapters coming. Either way you shake it, the film comes highly recommended. 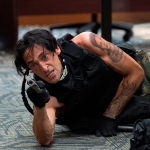 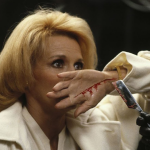