As this movie is based on real life, well known events, you’d think a synopsis would be simple, but that’s not the case. “Gods and Generals” is a prequel of sorts to Gettysburg, which features some of the same actors and even some of the same talent behind the cameras, including the director of both films, Ronald F. Maxwell (Joan of Arc: The Virgin Warrior). “Gods and Generals” has a story movement of course, as characters evolve and events unfold, but it moves on a large scale and as such, there is no typical plot to speak of. We all know what happens, but the presentation is what matters in historical motion pictures and “Gods and Generals” makes sure to give us a grand, cinematic look at those events. The war itself is the main focus, so battles are frequent and well staged, though the blood and brutality are toned down somewhat, so don’t expect the level of realism as seen in movies like Saving Private Ryan or the like. But we also look inside the men at war, to see what drives them to engage in the war and also what fuels their personal lives. These men might be soldiers and officers, but they are also men and have wives, children, and normal lives they wish to return to, though most never came home. So expect a broad, but personal look at the Civil War, which proves to be an interesting approach.

This movie cost a good amount of cash, which is understandable, given the immense scope and intense attention to realism. In fact, Ted Turner himself shelled out the entire budget himself, so “Gods and Generals” was a landmark production. But when it hit theaters, audiences turned cold and the movie failed to bring in even the expected profits. So “Gods and Generals” proved to be an expensive mistake in terms of bottom line, but does it succeed as a historical motion picture? Of course, when a movie tanks like “Gods and Generals” did, people often assume it was bad, which isn’t often far from the truth. But tons of bad movies rake in truckloads of cash, while good movies, even great ones fail to break even. In the case of “Gods and Generals”, the audience is so specific, it had a hard time pulling in outside viewers. If you’re a Civil War buff, then “Gods and Generals” is a virtual masterpiece, packed with the kind of realism and attention to detail that all great epics possess. But while I like to watch historical pictures, I found this one to be rather bland at times, not even as good as Gettysburg, which shared much of the same talent. The visuals are superb, from the costumes to the battles, but the performances and writing simply can’t keep up. But without question, “Gods and Generals” is well worth a rental for those interested.

I am so confident in the skills of Robert Duvall, that even if a movie seems terrible, his presence is enough to warrant a look. And since he has a prominent role in “Gods and Generals”, I knew I could at least count on his performance to be excellent. As it turns out, even Duvall has trouble with the material in this one and his effort comes up short. I was sure that even with the worst lines, Duvall could make it all work, but he must have pushed to his limits in “Gods and Generals”. The problem lies with how the movie’s dialogue is presented, as no realistic lines are to be found, just long winded speeches and endless metaphors. So there isn’t a natural texture to the conversations, not to mention that most of the talking scenes are stretched so thin, you’ll find yourself wishing for the next sequence to arrive. So even an actor of immense skill like Duvall is left hung out to dry, since he is unable to bring it across in natural fashion. I’m sure he does better than most could, but even so, this isn’t one of his highlights. Other films with Duvall include The Apostle, Days of Thunder, Gone in Sixty Seconds, Network, and The Great Santini. The cast also includes Jeff Daniels (Blood Work, Dumb and Dumber), Stephen Lang (Eye See You, Fire Down Below), and Mira Sorvino (The Replacement Killers, Summer of Sam).

This is the second offering of “Gods and Generals” on Blu-ray, but it might as well be the first. First up, there’s an additional hour of running time that’s been added to the film. The 2.35:1 AVC HD transfer supersedes that of the previous offering by some fine detail work. Everything looks a bit sharper, more defined and colors seem to pop a bit more. Look at the coarse hairs in the beards of the characters, you can make out each grey and black hair. The battle scenes, of which there are many, look like you could walk right out on the battlefield. Black levels seem to be on the mark and contrast has seen a bump up as well. This is one amazing-looking transfer.

If ever there was a movie that epitomized audio, it’s “Gods and Generals.” We’ve got a DTS HD Master Audio soundtrack that, quite simply, is amazing. Again, the battle scenes really take front and center here. The LFE are off the charts and I’m not joking when I say that the room literally shook. Dialogue is crisp and clear, surrounds are ever so active and the front channels never stop humming. If you’ve invested a lot of money in your home theater system, you’ll get more than you bargained for here. This is one of the most active, robust soundtracks that I’ve ever heard and it sounds great!

Warner is pulling out all the stops with their re-issues of this movie as well as Maxwell’s previous “Gettysburg.” As previously mentioned, more than an hour of new footage has been added here with an entirely new subplot (I won’t divulge what that is, of course). And while the previous supplements made the jump to this new Blu-ray DigiBook, there are a few new supplements as well. The previous audio commentary with Maxwell and his advisors is intact. The three featurettes are also included: “Gods and Generals: Journey to the Past” focusing on the realism of the movie, “The Life of Thomas “Stonewall” Jackson” focusing on Stephen Lang’s character and “The Authenticities of the Film.” New to this two disc set is the aforementioned director’s cut of the film, an introduction by Ted Turner and Ronald Maxwell as well as Maxwell’s “invitation” to “Take the Journey Through Hallowed Ground” which is what Warner is really focusing on. Suffice it to say that if you’re a Civil War buff, this is one of the most ultra-realistic films that deserves a spot on your shelf. 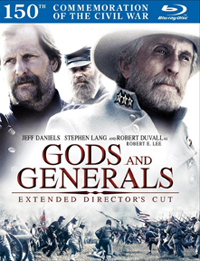