I’m a sucker for the Academy Awards. I don’t profess to have all the answers, have the “right” taste and essentially shrug my shoulders and will give any movie a chance. I think “The Academy” likes that, but then again they most likely don’t know I exist. I’m getting to a point, I promise. A few years back I was watching Roger Ebert’s TV show (when it was still on the air) and they reviewed a movie called “The Triplets of Belleville.” I was intrigued and when the movie came out on DVD, I popped it in my player as fast as I could. I loved it! So new, so unlike anything I’d seen before and that song – so…catchy! The song was nominated for Best Song but ultimately lost out to “Return of the King” (and I can’t even remember the name of the song now). So when I saw that the same creative force behind that movie was at work with another, I was once again excited to see what he had in store.

Set in Europe in 1959, we meet an illusionist (voiced by Jean-Claude Donda) who has seen better days. His acts aren’t exactly packing houses, rather he has to make way for the Rock n’ Roll stars that are starting to emerge. He lives a meager existence, bouncing from one act to another, all the while trying to find enough money to live and eat. It so happens that he gets an offer to perform at a pub in Scotland. There he meets a young girl named Alice (voiced by Eilidh Rankin). Alice is naÃ¯ve and truly believes that the illusionist is a real magician. The two form an unlikely bond, via some small gestures (he buys her new shoes). Alice stows away on his ship and follows him to Edinburgh where he becomes a surrogate father to her. He bestows gifts on her, with Alice believing that they’re appearing out of thin air. As time passes, Alice falls for a man and the illusionist is relieved of his “duty” to Alice.

There’s a lot of reading in between the lines in this film namely because there’s about ten lines of actual dialogue in it. And what dialogue there is sounds like a combination of gibberish and French. I turned on the subtitles, thinking that would help me out, but the only thing that was really translated was the word “Hey” or “Hello.” Not a lot of assistance. While I don’t think that “The Illusionist” had the exuberance that “The Triplets of Belleville” did, I will say that this probably had a bit more heart. It’s not an uplifting movie, for sure, but it probably makes you think more than most scripted movies. And while “Toy Story 3” took home the Oscar for Best Animated film, these two are night and day and really only share the common element of animation. A good way to look at it is if “Toy Story 3” is the highly polished, shiny quarter of the group, this would be the dull penny in the corner. While it’s no less a film, it probably has a particular audience.

In a world where most every film is 3D and computer animated, “The Illusionist” takes a step back, way back, to classically drawn animation. Yes, this movie was actually hand-drawn just like animation used to be. The 1.85:1 AVC HD transfer certainly makes the film look its absolute best, but the way the film looks, it’s dark and dingy. This isn’t a fault of the transfer, mind you. Browns dominate the palette with the flesh tones seemingly blending into the backgrounds in some scenes. This is about as opposite as you can get from something like “Toy Story 3” that’s so perfect and polished, it’s hard to find an error anywhere. I will say that the smoke used in this film is ultra realistic (and ironically enough, the only computer animated part of the film), so if it’s a different viewing experience you’re looking for – this is it.

While the box reads “DTS HD Master Audio”, don’t expect a whole lot on the audio front. As I mentioned, there’s only a scant amount of dialogue and the majority of the sound is from the score, mainly consisting of the piano. I don’t think the surrounds really ever were active and if they were, I must have missed them. I’m reminded of watching a Buster Keaton or Charlie Chaplin movie here – and proof that sound isn’t everything. There’s not a whole lot else to mention here, it’s not a “bad” soundtrack, per se, but don’t use it to show off your setup by any means.

“The Illusionist” comes to Blu-ray in a two-disc edition with the second disc being a digital copy of the film. We start off with “The Making of the Illusionist” in which we get, well, it’s pretty self-explanatory by now. More interesting is “The Animation Process: A rare look at the line tests and progression sequences.” Ever want to do your own animated film? You won’t after seeing how much work goes into just a few segments of a movie like this. “Steam, Splashes, Smoke and the Flying Scotsman” before and after sequences show how these select scenes look before computer animation and after as well as two other segments: “Tatischeff” and “Garden Party.” 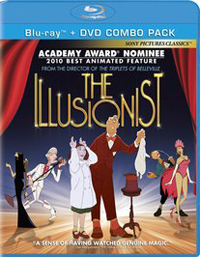