The movie which literally made Matt Damon and Ben Affleck overnight stars, “Good Will Hunting” is a very entertaining and moving character study which the duo also wrote. The film gave them Oscars for Best Original Screenplay, while Robin Williams won for Best Supporting Actor (in a very good and dramatic performance). It was also nominated for seven other awards, which included Best Picture and Best Director for Gus Van Sant.

Will Hunting is a janitor, scrubbing and washing the floors of M.I.T. He hangs out with his pals, gets drunk, and has one too many run-ins with the law. Yet one thing makes Will different from everything around him. He can solve any math problem with ease that frustrate many and he can use his photographic memories to recall just about anything. Simply put, Will is a genius.

An M.I.T. professor (an outstanding Stellan Skarsgard) leaves a very complex on the board outside his room, hoping a student can solve it. Will solves it, and keeps solving more and more of them, and no one knows who is getting them correct. Until the professor catches will, accusing him of ruining someone else’s work. Yet the professor soon realizes that Will solved them all. Will is also in trouble with the law for a big fight, among other things. The professor offers Will a deal, instead of a jail sentence (which the judge said was okay). He works with him and sees a psychologist. Will, at first, is reluctant, but soon joins in this deal. However, he seems to be scaring away every psychologist who meets with him. Yet he soon meets his match with Sean, an old friend of the professor. As Sean and Will talk about anything and everything, Will is soon deconstructed and must realize what he has, and what he can do, while conquering his inner demons of the past.

“Good Will Hunting” is one of my favorite films ever, all because it’s an incredibly strong movie. The script by Damon and Affleck is very impressive and solid, the direction from Gus Van Sant is lean and remarkable, and every performance makes this all believable. Williams is incredibly strong as the widowed psychologist, and Damon is perfectly tense and angry as young Will Hunting. The supporting cast, which includes Skarsgard, Affleck and Minnie Driver all hold their own. This is a movie which I could watch again and again. It has a lot of depth, and there are many lessons which can be learned from this movie.

“Good Will Hunting” has had a rather storied past when it comes to its look and feel on the disc format. This was originally offered by Disney with a non-anamorphic transfer. Our friends to the north (the Canadians) had a version put out as an “Alliance Version” that contained an anamorphic transfer of the film, but left a little to be desired. Flash forward a decade and here we are with “Good Will Hunting” finally on Blu-ray. The 1.85:1 AVC HD transfer is certainly an improvement over any incarnation of the film that I’ve seen. Colors are a bit stronger, the detail is much improved and an overall more glossed over look and feel to the film appears to be present. There are a few instances of some dirt and grain, but by and large this new transfer is the way the film was meant to be seen.

To accompany the new transfer, the film now has a DTS HD Master Audio soundtrack. Like most movies of this genre, it didn’t really need it, but I suppose it’s good to have nonethless. Most of the film is dialogue-driven with only some sparce moments of bona fide “action.” One instance that I recall is when Will and his friends get in a fight on the playground, Gerry Rafferty’s “Baker Street” sounds particularily engagaing in all of its uncompressed glory. There’s no hint of distortion, though you might have to turn an ear to your speakers to hear some of Robin Williams’ dialogue as he plays this one as low key as you can get. Overall, not a bad mix but then again there wasn’t really much wrong or that needed improving with this one to begin with.

Like most all the other “Miramax” released on Blu-ray, this one contains the same supplements as its DVD counterpart. We start out with a slam bang audio commentary by Matt Damon, Ben Affleck and director Gus Van Sant. Essentially all aspects of the movie are talked about and it’s a very good track, full of little tidbits here and there and we can actually see how passionate Affleck and Damon were about this “little movie that could.” Some 20 minutes of deleted scenes are shown with optional commentary and we get some inside information as to why they were cut, etc. We get a couple of brief featurettes with some scenes from the film followed by some interviews. We get the same “Miss Misery” music video by Elliot Smith along with an Academy Awards Best Picture montage and we round out with the theatrical trailer. There is a second disc that contains a digital copy of the film for your portable device. 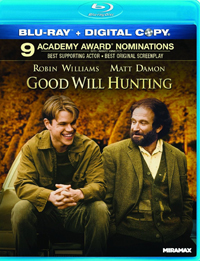