The sport of golf has come a long way since Happy Gilmore first arrived in 1996. Later that year Tiger Woods would make his professional debut and change the sport forever, making it more popular and almost single handedly making the sport more mainstream. At the same time, Adam Sandler was then pretty much known for his work on Saturday Night Live and his previous movie, “Billy Madison” was his only foray as a leading man. Happy Gilmore changed all of that and while not a huge commercial success, the gross was modest enough that it got him noticed and the rest – as they say – is history. One thing that always boggled my mind was the fact that there hasn’t been a sequel. As mentioned before, both the star and the sport are much more recognized than when the movie aired and it would seem to be a no-brainer to make another. But then again, I’m not a Hollywood executive. Happy Gilmore was a showcase for Sandler’s juvenile humor and no one loved it more than me.

We meet Happy Gimore (Adam Sandler) as he’s trying out for a local hockey team for the um-teenth time. By his own admission, he’s got the heart of a hockey player but wasn’t exactly the best puck-handler. Essentially, the only thing Happy brought to the game of Hockey was his slap shot (which could shatter the Plexiglas) and his temper (he holds a record in that he’s the only person to ever take off his skate and try to stab someone with it). After his grandmother’s (Frances Bay) house gets repossessed by the IRS, Happy discovers that he can make some money by hustling people at the driving range. You see, movers were playing with his grandfather’s clubs and to get them to go back to work, Happy had to out drive them…a major plot point there. Happy quickly falls under the wing of Chubs Peterson (Carl Weathers), a one-time touring professional who had his hand bitten off by an alligator. Happy makes it on tour and has eyes for the PR girl, Virginia Bennett (Julie Bowen), only to find out that she doesn’t date players. The only thing standing in the way of Happy winning the money is Shooter McGavin (Christopher McDonald), the current tour champion who thinks golf was better without someone like Gilmore.

Now I’ll be the first to admit, as a film critic, that Happy Gilmore isn’t the best movie out there. I personally like it and have seen it countless times. For every “Casablanca”, “The Godfather” and “The Graduate” there’s four or five movies like Happy Gilmore. Adam Sandler has become more commercially successful in his movies, but I really don’t think I’ve laughed harder at his performance than in this movie. Under the surface is the comic performance of Christopher McDonald, someone who’s done drama and comedy and can pull each off very convincingly, his Shooter McGavin is likeable yet despicable in the same sense. Sure this movie has its flaws and there’s more product placement than you can shake a stick at (then again, watch a golf tournament on a weekend and count the number of advertisements you see), but that’s that. Suffice it to say that this will probably be the only movie, past or future, that has a fight scene between a game show host (Bob Barker) and a golf player. Couple that with a sociopath nurse (Ben Stiller) and you’ve got one helluva movie on your hands.

I’ve seen Happy Gilmore on every format imaginable: VHS, LaserDisc, DVD, HD-DVD and now, finally, Blu-ray. The HD-DVD was one of the first titles out for Universal about five years ago. There’s good news and bad news. The good news is that the 1.85:1 VC-1 HD transfer looks good. Colors are bold and strong, contrast looks consistent as well. Yes, there are a few spots of some grain and the movie appears a bit soft in a few scenes, but by and large this looks as good as it ever has. This brings me to the bad news…it’s the exact same transfer that appeared on the HD-DVD some five years ago. No new AVC transfer has been made for this Blu-ray edition so while it doesn’t look bad by any means, it could (and should) look better than this. That’s just pure laziness on Universal’s part, plain and simple.

Unlike the video, the audio has been given a nice little shot in the arm. The previous Dolby Digital Plus mix has been overhauled with a pretty spiffy sounding DTS HD Master Audio mix. Now, granted, Happy Gilmore isn’t a movie that will light up your system, but there are some decent spots that let the soundtrack shine. When Happy hits his drive, the trees resonate in the background, the cannon used to accentuate his drive sounds great and the crowd scenes sound good as well. Dialogue is strong and well-centered as well. This is, by far, the best the movie has ever sounded.

This year marks the 15th anniversary of Happy Gilmore and I can still remember seeing it early in 1996 like it was yesterday. Sadly, Universal hasn’t marked this occasion with a special edition of sorts. No, all we get are the same supplements that were found on the HD-DVD. That’s to say that we get the same 18 minutes of deleted scenes and some outtakes. I’d like to think that Adam Sandler would record a commentary track for this movie seeing as how this movie is now one half of his production company’s name (“Happy Madison” with “Billy Madison” being the other). Sigh. If you own the HD-DVD, I see no reason to upgrade until this title is done right. 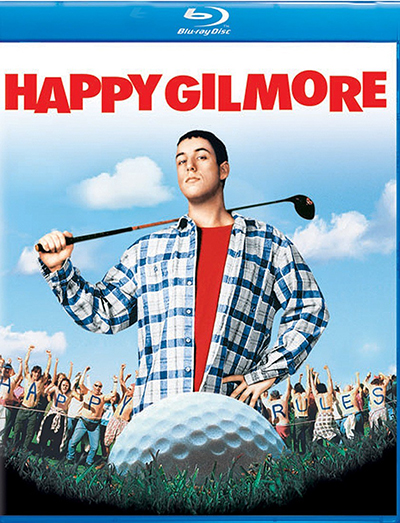