Twilight Time has established itself over the last few years as the premiere destination for High Definition transfers of Woody Allen films. They have released several films from his career and this year alone they have already released or plan to release Alice, Husbands and Wives, and Manhattan Murder Mystery. Woody Allen is a divisive figure. In light of everything that is going on in our country it becomes harder and harder to separate the artist from the art. Personally, I can’t help it. I love Woody Allen films. His sensibilities are similar to mine and I appreciate the style in which he writes and directs his films. I don’t think every Woody Allen film is a classic and some are not especially worth your time at all (Scoop.)  Then there are the Woody Allen films that I believe to be truly classic: Stardust Memories, Manhattan, Crimes and Misdemeanors – to name just a few in a career that spans over fifty years. I sat down and watched the recently released Blu-ray of Husbands and Wives this week and in my opinion it is one of his best films.

The story revolves around two married couples. When Jack (Sidney Pollack) and Sally (Judy Davis) come over for dinner with their best friends Gabe (Woody Allen) and Judy Roth (Mia Farrow,) they have an announcement to make: they are splitting up. The film follows the ways in which this announcement and ensuing infidelity affects the marriage of their friends. Jack pursues sexual freedom and an aerobics enthusiast while Judy tries to enjoy being single for the first time in decades. Gabe and Judy find their marriage tested without the assistance of their best friends‘ marital commitment.

Husbands and Wives could not have come at a worse time in Allen’s career. As Woody Allen released this film he found himself at the center of a scandal. He was in love with his adopted daughter and his marriage to Mia Farrow was falling apart very publicly. Despite the fact that this film was written seven years earlier, it is impossible to watch the film and not think of what transpired between Farrow and Allen. This (as can be expected) was the last collaboration between Allen and Farrow and marked the end of a long and excellent spree of films together over the previous decade.

This film immediately feels different from other Allen films due to the handheld camera cinematography by Carlo Di Palma. This technique causes movement in every frame of the film and makes the film feel very different from anything that Allen had done before. Some viewers will find this technique jarring or motion-sickness inducing and dislike it, but I thought it worked wonderfully. The film is shot in a faux-documentary style so the handheld filmmaking works well for the frenetic material. This is also as beautiful as any of Allen’s films with great muted autumn colors on display. Another thing that separates this film from other Allen films is the heavier use of profanity and even a bit of nudity. These things are not  common in Allen’s films, but in the Nineties would become a bit more common with releases like Deconstructing Harry, Mighty Aphrodite, and Celebrity. These uncommon elements add an extra layer of realism to the film because this is not a film about youngsters nor is it designed for children to watch it. This is a film about grownups that are hitting their mid-life crises and are not sure of themselves or their relationships anymore.

Sidney Pollack is absolutely fantastic in this film. I love him as a director and I love him as an actor. Typically relegated to side roles, here he is a lead actor and really sinks his teeth into the part. Woody Allen and Mia Farrow are tremendous in their roles, but it is hard to watch the film and feel like they are not acting at all, but actually watching their marriage disintegrate. Judy Davis was nominated for an Oscar for her role and delivers the goods in scene after scene.

This is some of Allen’s most bittersweet and biting filmmaking. It is more cynical than much of his output, but it did not dissuade my enjoyment one bit. For me, this is one of Allen’s finest moments – all the more impressive considering all that must have been going on behind the scenes. I know that I will be returning to this film time and again, and all the while, be thankful that I love my wife

Like most of Allen’s best films, this film features New York during fall, so the palette of the film is mainly made up of grays and browns. Like other Allen films, it looks beautiful on Blu-ray. Unlike other Allen films, this film’s cinematography by Carlos Di Palma is shot mainly on hand-held cameras leading to a shakier look that may induce motion sickness in some viewers. For myself it is an experiment that pays large dividends and makes the film feel exciting and bold in each frame. This film is great visually.

Twilight Time have provided a DTS-HD MA Mono track. It has excellent fidelity to the original elements. This film does not rely heavily on any type of musical accompaniment so there is not a ton to judge here. The dialogue is crisp and this movie sounds as good as you are likely to ever hear it.

Husbands and Wives is one of Woody Allen’s greatest and most experimental projects. This is a great swan song for a partnership that brought the world a lot of great films. They could not have ended their relationship messier, but they still managed to put out a fantastic final film together. With strong performances, vibrant cinematography, and a very tightly written script, this is classic Woody Allen. I know I will watch this film fairly often in the future. Highly recommended. 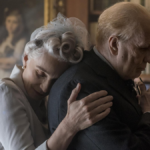 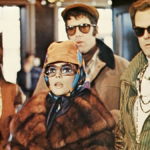