Based upon the novel by Thomas Pynchon of the same name, Inherent Vice is the most recent film by acclaimed director Paul Thomas Anderson. Both the book and the movie will find their fair share of fans and dismissal. They are both extremely divisive, and ask will try my best to explain why they will inspire love or hate in probably equal strides.

The plot of the film revolves around Larry “Doc” Sportello (Jaoquin Phoenix), a stoner private investigator who operates his small agency out of the back of a doctor’s office. The year is 1971 and the setting is Los Angeles. Nixon is still in office. Los Angeles is still reeling from the Manson family murders that have caused paranoia throughout the entire SoCal hippie culture. At the beginning of the film Doc is visited by an ex-girlfriend, Shasta Fay. The visit makes Doc nervous so he begins to look into what Shasta was doing. It turns out that Shasta was involved with Micky Wolfmann, a real estate developer who is in bed with a Neo-nazi biker gang. At the same time, Doc is visited by Tariq Khalil a Black panther who used to have dealings with Glenn Charlock, one of the Neo nazis in bed with Wolfmann. Doc goes out to an Asian sexual massage parlor to find Glenn. Once there he is knocked out and left next to the dead body of Glenn Charlock. This leads to him interacting with the well known and well advertised TV star cop, Lt. Bigfoot Bjornsen (Josh Brolin.) Bigfoot and Doc know each other and have a love/hate relationship. Knowing he is going to be hassled, Doc calls his legal council Sauncho Smilax, Esq.(Benecio Del Toro.)

The rest of the film will continue to unfold in this fashion. There are characters constantly being introduced the entire course of the film and the plot itself is very hard to decipher. The principal question in the book and the film is “What is the Golden Fang?” Is it a ship? Is it a cocaine ring? Is it a nefarious group of dentists in some underground activity? By the time you get to the end of the film you won’t even be that interested in solving the mysteries presented in the film.

Herein lies the problem for the film. Since there is not much in the way of a huge payoff as far as the mysteries in the film is concerned then what are we left with as an audience? This is where the audience divides in half. Many people will find the film slow and the ending to be anticlimactic to say the least. This will leave them asking the question of why the hell they just watched the film. Personally, I tend to side with the other half of the audience and really enjoyed the movie. The plot is somewhat incoherent, but that is the nature of the novel it is based upon and part of the charm for me. I enjoy watching all these stars slumming it in bizarre roles with particularly juicy roles for Owen Wilson and Reese Witherspoon to name just a couple. I also just really enjoyed the vibe of the movie. It was an awesome throwback to Altman’s The Long Goodbye as filtered by P.T. Anderson with a soundtrack that includes Can’s “Vitamin C” and a pitch perfect representation of early seventies Los Angeles. The movie and the book are both a bit pretentious and a little too aloof in their loose ends and incoherent plot, but I could not help but love both. That said, I highly recommend reading the novel before seeing the film to help get what is going on.

This is a bit tricky, actually. On one hand Warner puts out some amazing-looking Blu-ray’s and certainly this being a new film, we’d expect it to look its best. Then again, the movie was intentionally shot with grain and to look like it took place in the early 70’s. That said, this is no fault of the disc or any inherent (sorry, simply could not resist) problems to the media itself. The 1.85:1 AVC HD image stays true to Anderson’s direction and looks every bit the part as to how it should look. Those who are expecting a razor sharp, crystal clear image will be disappointed, though I doubt the target audience will be the black and white. All that said, the picture is top notch, colorful and detail is pretty good – just seeing Joaquin Phoenix’s pork chop sideburns and hair askew is worth the price of admission alone. Josh Brolin’s Johnny Unitas flattop is so precise, you feel you could balance something on his head. Colors are muted – intentionally – and it certainly is part of the overall viewing experience. I use that word in italics with good reason.

The sound is a different animal in that its pretty much what we’ve expected out of the film. If you’re looking for car chases, explosions or anything else that will test the limits of your system then you need to check out another movie (and probably not one directed by Paul Thomas Anderson). The film’s soundtrack is adequate with some nice songs here and there. Vocals are rich and crisp, though Phoenix’s character is perpetually stoned, so he tends to mumble throughout. All things considered, this actually sounded the part and I think viewers will be amply pleased.

I wish I could say that this disc is packed with supplements, offering the viewer hours of entertainment. I would be lying, however.

Inherent Vice is sure to divide an audience. I personally don’t recommend the film to others even though I personally really enjoyed it. The plot is far too convoluted to try to take it all in in just one viewing. This will be a problem for most if not all viewers. That said, nobody can deny the excellent casting and how beautifully shot the film is. The rest is open for conjecture! 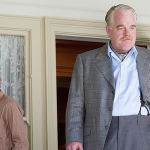