The Master was the last film that P.T. Anderson made with Philip Seymour Hoffman. Watching it serves as a great memorial to one of the best character actors of all time. Hoffman is pure dynamite as Lancaster Dodd, a book author with a small dedicated following that borders on becoming a cult. Lancaster Dodd is not introduced until about half an hour into the film. The film begins with Freddie Quell (Joaquin Phoenix), a drifter and war veteran, as he struggles with serious PTSD from his experiences fighting the Japanese in the Navy during World War II. The war has left him with some pretty serious issues. One issue is a severe inability to socialize correctly. He also is sexually deprived and obsessed. He has also taken to making homemade booze out of dangerous chemicals which has turned into an addiction. After losing a job as a photographer at a department store he turns to working on a farm. Unfortunately, somebody drinks too much of his home made booze and harmed themselves. Tk avoid being accused of poisoning the man Freddie runs. Through circumstance he runs directly onto a boat that has been commandeered by Lancaster Dodd and his followers. Lancaster quickly befriends Freddy and their master/pupil relationship is established.

The relationship between Freddy and Lancaster is the principal focus of the film and works itself out in incredibly rich ways. Freddy supplies Lancaster with his booze. Lancaster supplies Freddy with an outlet for his psychological problems. Lancaster constantly interviews Freddy similarly to a psychiatrist, but with a darker edge that is at once recognizable as possibly as harmful as helpful. Freddy becomes codependent on Lancaster, and defends his honor with vigor, sometimes attacking those who would speak out against him. Meanwhile, Lancaster speaks out to crowds about what could basically be described as ruminations of a mad man. He tells them about facing the problems of their previous lives to find peace in this life. He talks about the Earth being trillions of years old. He says that he can cure certain types of Leukemia.

Obviously, this man is based primarily on L. Ron Hubbard and the early basis for Scientology in the book Dianetics. Many of the ideas overlap with the ridiculous ideas of L. Ron Hubbard, and Hoffman resembles Hubbard in pigment and hair color. If the viewer wants to watch an excellent documentary on Hubbard and his cult, Going Clear a recent documentary aired on HBO is excellent and makes this film even more enjoyable.

Another interesting choice made by P.T. Anderson was to take almost verbatim dialogue from the documentary Let There Be Light by John Huston. Anderson relied so heavily on this film that they included it on the Blu-ray of The Master. I HIGHLY recommend watching this film before The Master, because it adds even more gravitas to an excellent script.

The Master is not my favorite P.T. Anderson film, but it is still damn near perfect. The writing is excellent and the film is stunningly beautiful. The film is shot on stunning 65mm film that could not make the film any more dazzling. The acting is perfect with strong performances by Phoenix, Hoffman, and Amy Adams. The only problem with the film is that it deals with some issues that are extremely hard to watch on film. It made me a bit uncomfortable more than a few times and some viewers will agree that it can be a bit much. This is my one caveat with the film: Before you sit down to watch The Master you need to know that it will make you uncomfortable and there is some sexually aberrant behavior in it. If you are okay with all that, then you should love The Master.

Shot entirely on 65mm film, The Master was the first film to utilize 65mm film stock for its entirety since Kenneth Branagh’s Hamlet. This film stock is incredibly detailed and lends an amazing amount of depth and clarity to the images on screen. When you pair up film stock this fantastic with a director this capable the results are nothing short of breathtaking. From the opening shot of waves in the ocean to the final shot this movie looks absolutely incredible. This is easily one of the most stunning films that I have in my collection. They did an excellent job on the transfer. I could not find a single compression issue. Thank God they gave this film the justice of a 50GB disk! Prepare to be blown away.

The original master audio is presented in DTS-HD 5.1 surround. Most of the time the audio mix is a home run, deftly blending in the score, the numerous sound effects, and the actors’ voices with ease. Jonny Greenwood’s score is perfection and fits the visuals like a glove. The movie for the most part is subdued, so don’t expect it to shake the walls of your house, but the surround effects are used cleverly and feel immersive through out the film. The transfer is excellent and has no trouble with clarity (although sometimes I had trouble understanding Joaquin Pheonix and had to rewind!) No complaints here.

The Master is an absolutely fantastic film for people who love film. Beautifully shot, scored, and acted, the film is rewarding on almost every level. The film is still not my favorite P.T. Anderson film, but that just shows how damn talented he is for this to not be his best. The supplements are fantastic and deeply enrich the film. Go ahead and add this one to your collection. 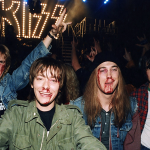 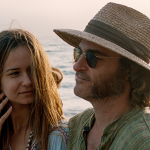