Superman.  Just saying the word evokes images of a flowing red cape, jet black hair and the ability to leap tall buildings in a single bound. And, let’s face it, this is probably one superhero that pretty much everyone has heard of.  Superman first burst onto the scene in Action Comics #1 in the late 1930’s (and if anyone out there actually has a mint condition copy of that issue, I’m sure it’s worth quite a pretty penny).  Since then, Superman has been part of our lives on radio, television and of course the silver screen.  Truly there’s really nothing that Superman hasn’t done or been through.  Hell, DC Comics even killed the character in 1992.  But he came back.  He always does.  It’s been said that the most popular version is Richard Donner’s 1978 version starring Christopher Reeve.  Admittedly the first two were great and the last two…not so much.  In 2006 they tried to reboot the franchise with Brandon Routh in the lead, but that really failed to make an impression. So here we are. It’s 2013 and we’ve got Henry Cavill playing the Man of Steel, he’s ditched the red underwear and we get a glimpse into a side of Superman that we’ve not seen before.  Either Warner will knock it out of the park or it’s back to the drawing board.

In Man of Steel, we’re treated to a different point of view as we meet Jor-El (Russell Crowe) as he tries to convince a council of elders that the planet of Krypton is dying.  But before he can fully convince them in walks General Zod (Michael Shannon) who instigates a coup and takes Jor-El prisoner.  Jor-El is “freed” but not before he snags a mysterious skull object and returns home to his wife Lara (Ayelet Zurer) as she’s just given birth (the first birth in several hundred years). The baby, as we all know, is Superman and we know what happens then.  However, we’re treated to a rather randomized version of Clark’s (Henry Cavill) life on Earth. We meet him as an adult, then see him as a child all the while his parents (Kevin Costner and Diane Lane) try to suppress his natural powers.  Clark has taken odd jobs to remain anonymous, but when General Zod and company finally make their way to Earth – it’s hard to fit in when you’re the man of steel.  We then meet some familiar faces with Lois Lane (Amy Adams), Perry White (Laurence Fishburne) and Col. Nathan Hardy (Christopher Meloni).  This, of course, begs the question – can Superman save the Earth against the forces of Gen. Zod?

I wouldn’t consider myself a Superman “nut” but I’ve seen every big screen adaptation and I have to say that this is, by far, my favorite version. Granted it’s nice to not have the same story rehashed again and again, so it was a nice change of pace to get a different perspective on…everything.  I was at first very dubious as to the casting of Henry Cavill, though I’d enjoyed him in Immortals, I wondered if he had the chops to pull this roll off. He did.  While Amy Adams isn’t the best Lois Lane, I think she did a fine job here. But let’s get real – this is all about Superman.  No doubt Warner is trying to reboot this franchise – again – and I think they might be onto something here.  They won’t let Batman go and with 2015’s Batman vs. Superman already filming, the wheels are literally in motion.  Usually I might add something like “this movie isn’t for everyone…” but I won’t say that here. This is a classic re-telling of a classic superhero that’s perfectly fit for a new generation. Not many movies that are 140 minutes feel like they go by in about 30, but this is one of them.  Suffice it to say that this is highly recommended.

This is, in no small part, coming out to promote the Batman v Superman: Dawn of Justice film. That’s fine, of course. Taking a look at the film in 4K, the opening credits to the closing Man of Steel simply reeks of anything and everything HD.  Warner presents the movie in a 2.40:1 image that, for me, falls just short of perfection.  The CGI of Krypton looks spectacular with detail being the at the forefront of this visual feast.  The patterns on Superman’s suit, the five o’clock shadow and even the red in his eyes all look amazing.  Colors are a bit on the darker side here, though the film takes us through several different scenes that are presented in a myriad of ways.  What’s that mean?  There’s really no consistency in the color palette, but that’s not a bad thing. If anything it shows us how diverse the structure really is.  Back to detail – take a look at Kevin Costner’s face. Now there’s some detail we could do without!  As is the case with so many other big movies to Blu-ray, this looks fabulous.

The previously-released DTS HD Master Audio soundtrack has been replaced by a Dolby Atmos mix that’s also been down sampled to a Dolby TrueHD mix.  Vocals are strong and crisp with Cavill and Crowe’s raspy voices taking front and center.  Ambient surrounds are used and used with great measure. Put it this way, I thought I heard a noise outside and paused the movie only to find that it was my surrounds just plugging away.  And this is from a guy who’s seen more than his fair share of films.  You’d figure I’d know better!  LFE are used more in the second half of the film, but they add a depth to some of the battle scenes that’s unimaginable without their presence.  This is a very strong film, audio-wise and though we lack John Williams’ iconic score, Hans Zimmer’s is right up there.  You want a kick ass audio experience?  Man of Steel delivers.

This Ultra HD/4K version doesn’t contain any new supplements and the disc itself is featureless, the extras are from the previously-released single disc set, though the extras from the two-disc set are available, albeit from a web-based source.

This is kind of a toss up. One hand, it’s nice to have this title in 4K with a new Dolby Atmos mix. What’s missing are the extras from the previously-released Blu-ray, or unless you really want to see them – they’re available online.You’d figure for the premium price you pay, they’d give you everything. You’d be mistaken. If supplements aren’t that big of a deal to you and you’re all about the A/V – then get this (providing you don’t already have this in your collection). Otherwise, it might be best to stick with what you have. 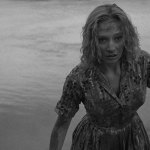 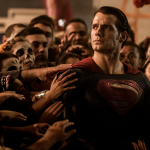