Woody Allen is one of those directors that actors must feel somewhat obligated to say “Yes” to when he offers them a role. And why not, he’s Woody Allen! Admittedly I’m somewhat of a fair-weathered fan of Allen and haven’t even seen all of his films. Sure I’ve seen his gems like “Annie Hall”, “Manhattan” and “Hannah and Her Sisters” but not much else. However in recent years Allen has left the Upper West Side and has ventured out to this glorious world of ours. Case in point is “Midnight in Paris” which takes place and makes no secret of its homage to the city of light. Those familiar with Allen’s films know that he’ll always have an ensemble cast in place and this one is certainly no different. Sporting a couple of Oscar winners with Kathy Bates and Adrien Brody among others – Owen Wilson takes front and center as a writer enamored with Paris and all of its rich history.

Wilson plays writer Gil, someone who’s made his mark writing movie scripts but now has decided to write a novel. He’s very successful at what he does, yet it’s clearly not his passion. His fiancÃ©, Inez (Rachel McAdams), seems to take him for granted but has no problem spending his money. While in Paris with her parents, they meet up with old friends Paul (Michael Sheen) and Carol (Nina Arianda). Paul, a know-it-all-know-nothing rubs Gil the wrong way leaving him free to literally wander the streets of Paris. And then, it happens. Gil is lost, but finds himself in a 20’s style bar of sorts where he meets Scott Fitzgerald (Tom Hiddleston) and Ernest Hemingway (Corey Stoll). Not really believing this to be real, he tries to re-create the same even the next night with success! As Gil becomes more accustomed to living in the past, his present is slipping away from him. Can Gil gleam what he needs from greats like Hemingway, Gertrude Stein (Kathy Bates) and Pablo Picasso (Marcial Di Fonzo Bo) and what of the woman of his dreams (Marion Cotillard)?

I absolutely loved “Midnight in Paris” not so much because it was well-written and acted, rather it was just a delight to watch. As I said earlier, I’m not a die-hard Woody Allen fan and I still need to see his last film “Vicky Christina Barcelona” (which merited an Oscar win for Penelope Cruz). Yes, technically this is a movie about time travel but the beauty of this is that we just accept it and ask no questions. I’m going on the assumption that the movie is somewhat historically accurate in that seemingly everywhere Gil turns is a notable name. I’m talking about the likes of Hemingway, Salvador Dali, Stein, Fitzgerald, T.S. Elliot and Pablo Picasso. We all reminisce about the past thinking “what if” but “Midnight in Paris” embodies it on the most literal level. Owen Wilson is in top form and lest we forget that Rachael McAdams was his love interest in “Wedding Crashers” not so long ago.

If the first three minutes of the film don’t have any impact on you, then you might want to turn off the movie and save yourself 90 minutes. “Midnight in Paris” is a living canvas that celebrates the beauty that is Paris. The 1.85:1 AVC HD image seemingly oozes color and light. Allen admits in the one included featurette that he wanted his DP (Director of Photography) to get plenty of soft shades of light, bright and brilliant color to adequately represent the city. And according to the characters in the film, Paris is the only city that’s even more beautiful when it rains. Flesh tones are very warm and the scenes in the past seem to emit a very earthy, brown tone to them. As we might expect, the shots of Paris during the day are all amazingly lit, with each looking like a painting in and of itself. Suffice it to say that if it’s a colorful film you’re looking for – you’ve found it.

For the longest time Woody Allen’s films were mono. It’s now 2012 and “Midnight in Paris” does sport a DTS HD Master Audio soundtrack, but it’s a 3.0 option (the center channel plus the two fronts). It actually took me a while to notice this as Allen’s films don’t make too much use of the audio. Dialogue sounds rich and full, though it does seem a bit crammed into three channels. Why his films don’t have a standard 5.1 option (or even a 5.0 option) is well beyond me. Still, despite the limitations of the sound field, it’s a pretty decent mix and one that won’t disappoint.

Unfortunately “Midnight in Paris” comes with very few supplements and the only one really to note is “Midnight in Cannes”, a press conference in which Allen, McAdams and Wilson speak on their parts in the film. Allen admits that he had no script in mind, only the title, but evidently he solved that problem. The original theatrical trailer is included as well as is a photo gallery. 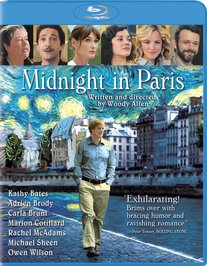