I know that Ryan Gosling used to be a member of the Mickey Mouse club along with Justin Timberlake, but after reading his bio on IMDB, that was in 1993 and I was in college then. Now I do remember him from one of my favorite guilty pleasure movies, “Murder by Numbers.” In it he played a high school mastermind attempting to get away with murder. Gosling went onto more critical acclaim a few years later when he was nominated for an Acacemy Award for his portrayal of a high school teacher addicted to crack in “Half Nelson” (he lost to Forest Whitaker in “The Last King of Scotland”). And as every sap knows, he was the male lead in the adaptation of Nicholas Sparks’ “The Notebook” with Rachael McAdams being the other. Gosling had a trio of film come out in a very short amount of time in 2011 with this “The Ides of March” and “Crazy Stupid Love” – all of which he was praised for. For someone just entering his 30’s Ryan Gosling has achieved both critical and commercial success. He’s good-looking, can pull off drama, action and romance movies with seemingly little to no effort. Does he have a bright future in films? Do we really need to ask that question?

In “Drive” Gosling plays a man with literally no name. He’s credited only as “driver” and that’s what he does. He’s a stunt driver who lives in Hollywood and makes his living behind the camera and working at a local garage. From time to time he does some freelance work as a, you guessed it, driver. As chance would have it, he starts to become romantically involved with his neighbor (Carey Mulligan) and as their relationship starts to grow, her husband Standard (Oscar Isaac) is subsequently released from prison. Standard wants to put things right in his life, but he owes some men some money for keeping him safe while inside. As payback, he must commit a robbery when, in theory, all is forgiven and his debt re-payed. Things don’t go according to plan (they never do) and now the driver’s life is in danger. His fate is in the hands of two small time mobsters, Bernie (Albert Brooks) and Nino (Ron Perlman). And to live his life without looking over his shoulder, it’s got to be them that go or him. This begs the question – who will survive?

“Drive” was critically-praised upon its release and I do agree that it’s a well-made and very interesting film. Gosling is playing it low key here, for sure. Almost immediately I noticed a very 80’s look and feel to this film from the neon pink credits (even the font seems dated) to the synthesizer-induced soundtrack that made the film work. Make no mistake about it, though, the film takes place in present day. And I’ll go ahead and give a warning here in that the film has some pretty intense scenes of graphic violence. And I’m talking graphic as in a man’s face gets stomped in and a slow-motion shotgun blast to the head. You’ve been warned. Gosling gives a very understated performance and it’s nice to see one of my favorite actors, Albert Brooks, play against his stereotype. While “Drive” isn’t for everyone, it’s certainly a breath of fresh air. And for those that want to hear Gosling talk, well then check out “The Ides of March” where he’s in literally every scene and never seems to shut up. “Drive” is a very interesting film though I’m not sure it quite lived up to the praise. Still, for those wanting or needing yet another fix of Ryan Gosling – here you go.

“Drive” has a very unique look and feel to it and the 2.40:1 AVC HD image looks absolutely amazing throughout. The film has a very washed out look and feel to it, though the entire film doesn’t have this look. Detail is incredible with the individual hairs on Gosling’s face being readily noticeable. As I mentioned above, there are some very graphic scenes and when you can see the individual droplets of blood, you can rest assured that it’s a good-looking image. Contrast and black levels are right on target as expected and, quite frankly, this is just as we’d expect from a day and date release.

The DTS HD Master Audio soundtrack is…diverse. Really, that’s about the best word that I can use to describe this mix. This has some of the best examples of surround sound I’ve heard in quite some time with gunshots echoing through all channels, but contrasted with some of the quietist bits of dialogue that left me using every bit of my hearing to decipher the words. Gosling is a soft-spoken actor and he seems to whisper the majority of his lines during this film. There’s a great car chase scene that uses every bit of sound and every channel therein. The 80’s-influenced soundtrack is laden with synthesizers that again gives the movie a very abstract feel to it.

We don’t get a lot in the supplemental department with only a few featurettes to choose from. These range from the expected “Under the Hood” to the more surreal “I Drive” with each offering their own little flavor to the film. The most interesting was “Drive without a Driver: An interview with Nicholas Winding Refn” as the director shares his thoughts on the film and its journey from script to screen. There’s also a UV copy of the film and some BD-Live content to boot. 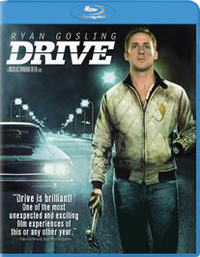