MVD Rewind Collection was one of my favorite film distribution discoveries of last year. The label has done lovingly rendered collector’s editions of films like Lionheart, Black Eagle, and recently Angel Town. Angel Town starred the French martial-artist Olivier Gruner and was an enjoyable B-movie that had moderate success at the box office. With that release under his belt, his producers decided that he should be the lead actor in Albert Pyun’s science fiction film Nemesis. In some respects this makes sense. Pyun had already directed a French martial artist named Jean-Claude Van Damme in a science fiction film called Cyborg, that had done well at the box office for Cannon Films. In another sense, it did not seem like a good decision for Gruner because Nemesis was designed as a vehicle for action scenes involving gunplay rather than martial arts, rendering Gruner’s best asset untapped. Regardless, Nemesis went on to achieve cult status in the video rental stores of my youth.

Los Angeles, 2027. A cyborg cop for the LAPD named Alex (Olivier Gruner) kills a cyborg courier that had some useful data. Alex flees the scene but is gunned down by a data terrorist. She admonishes him by saying that he is more machine than human before she proceeds to put numerous bullets into him. Back at the station, Alex is reassembled. Back to normal, in Baja, Alex guns down the terrorist that shot him. Two cyborgs sent by Commisioner Farnsworth to retrieve Alex meet with him, but he declines to do any work for the LAPD, despite the fact that he had been released from a prison on the basis of doing police work. One year later, in New Rio De Janeiro, Alex has become a smuggler. A cyborg arrives and shoots Alex. Alex is put in a remote cell by the LAPD until he accepts an assignment. Commisioner Farnsworth (Tim Thomerson) lets Alex know that there is a bomb in his chest that will detonate in three days unless he completes his mission. He must receive some data stolen from his former lover, a female cyborg named Jared. This mission will take Alex to Shang-loo in Hawaii.

Watching this film, it is somewhat difficult to evaluate. The reason this film is hard to evaluate is that the concepts of the film explore big interesting ideas but the execution is not bullet-proof. This is a common theme in Albert Pyun’s work. Watching the interview with Pyun that is on this disk, I couldn’t help but feel his pain. Pyun did not have final cut for this film and feels like the film did not quite match up with what he had hoped to accomplish. Would this film have been a masterpiece? Probably not. It still would feel like kicking a puppy to be too harsh given the circumstances that were completely out of his control.

Let’s focus on the positives first:

While some of Pyun’s films don’t deliver on the promise offered by the concept of the film, this one is pretty cool. It has some really interesting action sequences and is stylishly shot. Certain scenes look fantastic, I also appreciate that Pyun tries in all of his films to shoot for the fences despite having very little money to work with. The film has some pretty great practical effects. One sequence finds the main character shooting his way down a few floors of a building. That scene looked great and was done without the computer generated garbage that taints films today. The makeup effects are really cool – especially given the budgetary restraints.

I also was glad to see Tim Thomerson as the villain in the film. Thomerson is a cult film icon probably best known for his role in the Trancers films. In my opinion, he makes a movie better by his presence alone. Fans of the film Mortal Kombat will enjoy seeing the actor who played Shang Tsung, Cary-Hiroyuki Tagawa, in a small role in the film. This film also stars Olivier Gruner who has an interesting way of speaking that does not sound like English, but still sounds pretty cool. Grunier is not well cast for this film simply because of his inability to properly articulate the dialogue. That did not stop me from enjoying watching him in the film, but I had grown accustomed to him after watching Angel Town. If you have not seen him act, think of a low-rent Van Damme that refuses to use a dialect coach.

On the negative side, the film has some pacing issues. The film at some points gets a little repetitive during the action sequences. The bad guys are unbelievably bad shots. The storyline of the film is not bad, but it is a little hard to follow at times because of the convoluted side stories and lack of exposition. Going back to why this film is a little hard to judge: these problems all could stem from the editing of the final cut. That can not be said for the dialogue. Pyun wrote the script under the pseudonym of Rebecca Charles and there is no denying that his dialogue is clunky. This is a consistent problem with Pyun’s films and something that will probably make or break the film for you. For me, I think it depends on the day that I watch one of his movies. Sometimes, it doesn’t bother me in the slightest and some days I can not handle it at all. The last negative for the film is the score. The score cheapens the film, which is unfortunate given some of the accomplished imagery.

Like other Pyun films there are some hilariously strange moments and ideas in the film. The film features: Japan Phobia (think of the prevalent worries from films like Rising Sun that disappeared by the end of the Nineties,) a young Tom Jane in a brief nude cameo, and a scene with one tough granny who hates cyborgs. I like that his films have quirks that seem to make their way past the cutting room floor.

For myself, I really enjoyed watching Nemesis despite its numerous faults.I have tried to be objective in my review and found that difficult considering how hard the filmmakers obviously tried to make the film work. If you are a fan of Pyun’s other films (such as Cyborg) this is some of his best work. If you have not seen any of his movies, I would recommend starting with this one. If you do not enjoy this one, the rest of his films will probably not be your cup of tea. If you enjoy this one, I would check out Cyborg. As far as B-movie science fiction goes, you can do a lot worse than this flick. It has its fair share of negative marks, but I would watch it again.

MVD Rewind have provided an absolutely beautifully done transfer of the film using an MPEG-4 AVC codec of a brand new 2K restoration from the original camera negatives. They have been kind enough to feature the film in two aspect ratios – 1.78:1 or 2.35:1. I watched the film on my UHD 65” screen in the 2.35:1 ratio and it looked fantastic. I feel safe in saying that this is the best looking MVD Rewind Release yet. If you have seen previous iterations of this film on DVD (including on the DVD included in this set,) the film looked really rough. MVD have done an incredible job here. Fine detail is exceptional. Coloring is spot on. This gets a rare perfect score. Fans of the film should upgrade immediately. It is a night and day difference.

MVD Rewind has provided numerous tracks to choose from including French and German, but the English Dolby 5.1 surround and English LPCM 2.0 tracks were what I listened to. The 5.1 track sounds pretty good, but as can be expected given the budget some of the sound effects have that canned sound. The LPCM 2.0 track sounds good, but personally I liked the 5.1 track better.

Nemesis is not by any means a perfect film. It is definitely one of low-budget cinema auteur Albert Pyun’s best efforts, but the movie itself is probably about a “C” or “C+.” MVD Rewind have approached this project with a lot of care. It is obvious that they know that this film has fans and have tried to present as much archival material as possible and the new transfer is superb. Fans of the film will want to upgrade immediately. People who have not seen the film will also want to rent it prior to a purchase. The new interview with Albert Pyun was one of the highlights of this set and explains many of the difficulties associated with independent action filmmaking. That interview along with the new transfer accounts for the high score I am giving this set. In a perfect world we could get a Nemesis 2.0 in 1080p, but my assumption is that this cut was actually mastered in the rough shape in which it is presented. Overall, this is one of the better collector’s editions I have seen in the past year due to its attention towards giving fans as much material as exists. 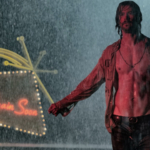 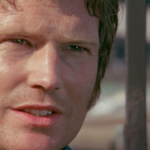