Unearthed Films is an up and coming film distribution label that recently released H.P. Lovecraft’s The Unnamable and Dark Side of the Moon on Blu-ray with new 4K restorations. As a nostalgic label that focuses on VHS oddities that have slipped through the cracks, I have enjoyed the catalog that I have viewed thus far. As a fan of campy films from the Eighties and early Nineties, this label is off to a good start. Their most recent release is a science fiction/ horror hybrid called Nightwish. The film is basically one part Altered States, one part The Haunting, and another part Invasion of the Body Snatchers. It fails to rival any of those films in terms of quality, but it has some unique aspects that set it apart from some of the more generic VHS offerings of its time.

As the film begins, a girl walks out of a party and finds a shoe. Then she finds a couple more shoes and a bloody shirt before stumbling upon a man feasting on a corpse. She runs away and the cannibal chases her. She is caught by the man and her dream ends. Donna (Elizabeth Kaitan) has been in a deprivation tank. A monitor was hooked up to her mind allowing others to view her dream. She is questioned by her professor (Jack Starrett.) The professor sends the team of parapsychologists to look into some ufo sightings in the dessert. This group includes Donna, Kim (Alisha Das,) Jack (Clayton Rhoner,) and Bill (Artur Cybulski.) They are driven by a jock named Dean (Brian Thompson) that loves to kill animals on the highway. They arrive at a mansion in the dessert. The professor is already there. He plans to summon an entity with the help of his students. This is just the start of a very interesting evening that combines the occult, aliens, strange experiments, and basically every horror cliche under the sun.

Okay – so you can probably tell from my brief summary that this film is of the “everything and the kitchen sink variety.” By the time the finale of the film unfurls, this quality works to the benefit of the film. As you are watching the film for the first time, it is a bit confusing and as a viewer it is easy to feel lost. The film is not entirely cohesive and not all of the ideas in the film are as interesting as others. For example, there are some scenes revolving around a very generic mentally challenged character that don’t serve much of a purpose in the film aside from raising the eyebrows of the audience. Then again, the manic energy of the film does work eventually and the last thirty minutes totally redeem any confusion caused earlier in the film. Is the script good? I’m tempted to say “No,” but it is inventive enough that it still sort of works.

What makes the film worth the celluloid it was filmed on are a few notable items. First and foremost, the special effects in the film from Greg Nicotero, Robert Kurtzman, and Howard Berger are great for the minuscule budget they were working with. I really enjoyed a few of the body effects in the film. Second – there are some pretty fun actors in the film. Jack Starret does solid work as the bizarro professor. Clayton Rohner was fun to watch on film. I was a big fan of a show he starred in called G vs. E, that aired when I was fourteen. The two female leads, Alisha Das and Elizabeth Kaitan, are both pretty and do well in their roles.

Nightwish allows you to view its dreams on Blu-ray courtesy of a new 4K restoration from Unearthed Films in 1.85:1 aspect ratio. The new 4K transfer looks pretty good. Understanding the inherent budget constraints and the fact that this film was developed as a VHS film, the picture looks as detailed as it is ever going to get. The cinematography by Sean Mclin won’t win any awards, but visually the film has some fun aspects including all the green lighting used in the film. It was shot on inexpensive film stock and has that look, but it is obvious that Unearthed Films put some good work into the restoration. There is some specking and the film is pretty saturated with grain, but I cannot imagine any fan of the film being less than pleased.

Nightwish has an LPCM 2.0 stereo track that is adequate. Mark Ryder and Phil Davies composed the score which moves the film along. The film’s dialogue at times was a little hard to hear and I became a little more familiar with the volume button in my remote than I would have liked, but overall the track serves its purpose.

Nightwish is a unique and at times nonsensical straight-to-VHS film. There is an audience out there for this type of thing and while the film does not work completely, I still found that it won me over by the end. This release may warrant a rental prior to a purchase. The technical specs are pretty good on this release even if the supplements are a little underwhelming. Overall – this is another interesting VHS oddity from Unearthed Films. I look forward to seeing what films they release out in the future. 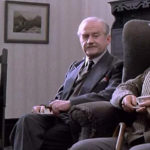 The Homecoming (Blu-ray)
Next Article 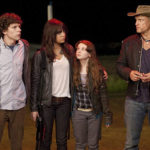