When I received “Orphan” in the mail, I thought I had the movie all figured out just by, you guessed it, judging by the cover. And, in a manner of speaking, I did. But at the same time, I didn’t. We’ve all seen films like “Orphan” before whether it be “The Good Son”, “The Bad Seed” or the grandaddy of them all, “The Omen” in which the child literally is the spawn of Satan. Thankfully this movie doesn’t tread into the supernatural and that’s probably why the film works so well. But enough about that, I’ll describe the plot below. I approached this film in a different way in that I thought I’d seen it all before and as far as horror movies go (and don’t think this isn’t a horror movie), it’s right up there with some of the better ones that I’ve seen.

Esther (Isabelle Fuhrman) is a little girl at an orphanage. She likes to paint, but is somewhat aloof and distant from all of the other kids. Enter John and Kate Coleman (Peter Sarsgaard and Vera Farmiga respectively), parents of two who are looking to adopt. Their youngest daughter, Max (Aryana Engineer) is hearing impaired (and the actress who plays her is hearing impaired in real life), but is sweet as can be. Daniel (Jimmy Bennett), the older brother is more interested in video games than anything else. Esther is welcomed to the family with open arms, but it’s not long before a few things start to happen that raises Kate’s eyebrow. There’s something about Esther that’s just not right. Maybe it’s the way she speaks, the questions she asks, how she can play Tzaichovsky on the piano or why she won’t remove the ribbons from her neck and wrists. Kate becomes increasingly more suspicious and things start to happen. Is Esther all she seems to be or is there something more to her than meets the eye?

The film is your classic “protagonist who knows something is wrong, yet no one believes her”. And isabelle Fuhrman is so good in her role that it provoked a visceral response on my part. I wanted to stand up and yell at the TV and have bad things happen to the character. Very few movies evoke that kind of emotion from me. While it’s true that the plot for “Orphan” is something we’ve all seen before, this actually isn’t a bad film. It’s got good, solid performances and I will say that there’s a twist that I really wasn’t expecting (probably why they call it a twist). While “Orphan” might lack in plot originality, it makes up for with fine performances by the entire cast. Remember, appearances can be deceiving.

“Orphan” is shown in a 1.85:1 VC-1 HD transfer that looks pretty darn good. I’m rather glad that the filmmaker’s decided to use the more narrow aspect ratio as it fills up the entire screen and gives us the sense that we’re somehow more “connected” to the story and the actors. While I’m usually a big fan of the wider scope of films, in this case it works. Colors are intentionally muted and the stark palette used in the film is perfect to establish the mood and setting. Detail is above average, even allowing us to make out every freckle on Esther’s face. This is another fine effort from Warner and I was fairly pleased at how this Blu-ray looked.

A Dolby TrueHD soundtrack is present on “Orphan” and it doesn’t sound that bad. I initially watched the movie on my old TV that wasn’t equipped with surround sound, but later re-watched it in all its uncompressed glory. Dialogue is very strong and consistent and I was surprised at how active the surrounds were. There are a few choice action sequences, toward the end of the movie for obvious reasons, and the LFE did kick in for some added depth. While not a “shoot ’em up” action/adventure film, “Orphan” does manage to deliver on a level that I wasn’t expecting. A nice effort on the audio.

Unfortunately the extras are fairly sparce on this two disc set. The second disc is a bonus digital copy of the film and the only supplement of substance is a featurette: “Mama’s Little Devils: Bad Seeds and Evil Children”. In this we get some interviews with the filmmakers and selected members of the cast on this film and some other films in the same genre. The disc is also BD Live equipped, however there’s nothing currently on the site. Wrapping up the supplements are a few deleted scenes and an alternate ending. 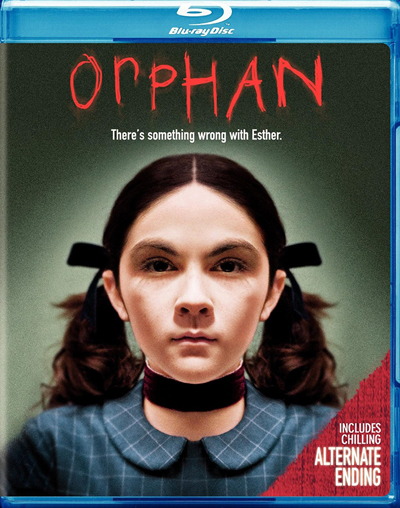