Nate (Mickey Rourke) has a long history of making bad decisions, but his latest mistake could cost him dearly. He has often wound up with the wrong women, but his time he slept with the wife of powerful mobster Happy (Bill Murray). In order to teach Nate a lesson, one of Happy’s henchmen takes him out into the desert. But before the lesson can be taught, an unusual turn of events sees Nate rescued. Those who saved him vanish in mystery, so Nate wanders the desert looking for help, until he happens upon a strange carnival of sorts. He takes in the usual carnival sights, but is taken in by a young woman named Lily (Megan Fox), who is inside a glass box. She is beautiful, but when she reveals she has genuine wings, Nate is smitten. As the two kick off a romance, Happy and his men haven’t forgotten Nate’s past indiscretion. Can Nate and Lily elude Happy’s wrath, or will Happy claim the young angel for himself?

In an interview about this movie, lead Mickey Rourke talked about how terrible it was. When your lead buries your movie in the press junket, that’s never a good sign. As it turns out, Rourke was being honest and Passion Play is indeed terrible. This movie wants to be surreal and dreamlike, but instead it is dull and incoherent. I love off the wall movies, but this one is just poorly made and writer/director Mitch Glazer just tanks it. You can tell Glazer has seen all of David Lynch’s movies, as he tries to ape them, but is pumping a dry well here. He tries to craft a web of surreal textures, but is never able to connect the strands. Even the simplest of his plot devices fall flat. Rourke doesn’t even make an attempt to act, Bill Murray treats his role like a joke, and Megan Fox, well she awful as usual. You can’t blame the cast however, as Glazer’s vision is just a total bore. Passion Play is a rambling disaster and while seeing old men seduce Megan Fox is humorous, you can safely skip this one.

Passion Play is presented in 2.40:1 widescreen. This transfer might not dazzle, but it looks good. I found detail to be much improved over the standard edition. You can really notice the enhanced resolution when it comes to the CGI special effects, which look just awful here. The colors appear to be warm and natural, while contrast is stark and consistent. A fine looking visual effort, not a home run, but a solid hit.

This DTS HD 5.1 soundtrack is by no means bad, but it is as middle of the road as they come. A basic track in all respects, no frills whatsoever. The surround use is minimal, as most of the audio comes from the dialogue. Vocals are clear, but sometimes the volume is a touch too low. This isn’t a huge concern, but one worth mentioning. Otherwise, a serviceable soundtrack that might not stand out, but it covers the bases. 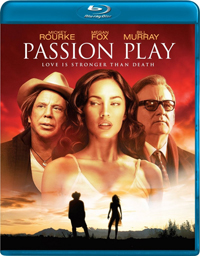