Writer/Director Quentin Tarantino was just a regular Joe some 15 years ago, but with his first movie, “Reservoir Dogs”, he entered the world of Hollywood and it will never be the same. Say what you will about the movie and Tarantino, he influenced the independent movie community with his films and really took it to a new level. While “Pulp Fiction” is considered his breakout success, it was both commercially successful and critically successful as well, he’s shown that he can continue to produce fresh new movies that rely on the dialogue of all things to drive the story along. Not only did this movie revitalize John Travolta’s career…again, but it introduced us to actors who had been lingering in the background for some time, but we had never really noticed. The film’s loose structure allows the viewers to get sucked into Tarantino’s world of drugs, crime and murder. Though often copied in style and dialogue, this is the one that truly started it all.

The non-linear plot is a very unique approach to the trio of stories that compose the body of the film. On one hand we have Pumpkin (Tim Roth) and Honey Bunny (Amanda Plummer) who open the film while contemplating robbing a coffee shop. Little do we know (upon a first viewing) that the coffee shop is inhabited by Vincent Vega (John Travolta) and Jules Winfield (Samuel L. Jackson) who make up one third of the story. Vincent and Jules are hired hit men who work for the evil Marsellus Wallace (Ving Rhames). On this particular day, however, the two are discussing a miracle that they supposedly witnessed and it makes a man, even a hit man, stop and think. This brings us to the second part of the story in which we meet Butch (Bruce Willis), a down on his luck fighter who is nearing the end of his career. He has made an arrangement with Marsellus to throw the fight and to take a fall. Instead, he kills the other fighter (in the ring) and having placed several bets on himself around the city, plans to make out a winner and say goodbye to his former life. Vincent has also agreed to take out Marsellus’ wife, Mia (Uma Thurman) for a good time. Mia, accidentally finds his heroin stash and, mistakenly, overdoses.

All of these plots loosely interact, but stand very well on their own. Intermittently we are greeted by cameos from seasoned actors like Harvey Keitel and Christopher Walken (delivering a most poignant speech about a certain gold watch that composes one of the film’s five vignettes). By the day’s end, some of the cast members have their lives changed forever. Some end up dead. Perhaps the most talked about scene involves Bruce Willis, Ving Rhames and a certain “gimp”. For those first time viewers of the film, I’ll try and not ruin it; but even ten years ago the scene was quite a shock to audiences. A “Love It” or “Hate It” attitude will most likely prevail, but this is the version to watch. A truly original film, “Pulp Fiction” has set the precedent in regards to originality.

“Pulp Fiction” is probably one of the most eagerly-anticipated films to arrive on Blu-ray, so they’d better have gotten it right! They did. The 2.35:1 AVC HD transfer is certainly a few steps above the previous standard DVD issue from several years ago. Colors look bright, though the movie has a very muted feel to it. The main thing I noticed was the detail, I just seemed to “see” things that I didn’t in previous viewings. The blood stains on Butch’s shirt, the bits of brain in Jules’ hair and the definition in Vincent’s hair. This looks good and sharp without the annoying DNR that so plagues some other releases. I caught a few scenes with a bit of movement and a tinge of grain, but they were very few and far between. For a movie that runs 154 minutes, this has exceeded my expectations without a doubt.

This was loud. I mean really, really loud! The film has been re-mastered in a DTS HD Master Audio mix that’s certainly robust in all facets of the word. Dialogue, which is a staple of Tarantino’s films, sounds crisp and rich. Trust me, there’s no better way to hear Jules’ “preaching” than in pure, uncompressed sound. The surrounds also came into play much more than I expected. Little things like a motorcycle starting up or a crowd of people talking (when Butch hits Marcellus with his car). Truthfully, I was pleasantly surprised by this mix and it delivers on more than one level.

“Pulp Fiction” stands as a landmark in cinema and has received praise from anyone and everyone. And now, finally, it makes its debut on Blu-ray. Lionsgate now distributes the older Miramax titles once handled by Disney and while the majority of those titles do have the original supplements intact, so too does this film. But we do actually get a few new items (more on those later). We start out with “Pulp Fiction: The Facts” which is more of a biopic on Tarantino, but it also tells of the origins of the film and how he came to be. Very interesting, though I felt a bit manufactured. Next up are some deleted scenes, five in all, hosted by the man himself. Quentin is very sure of himself, dissing the “Director’s Cuts” that are out there and telling us, quite frankly, that he made the movie he wanted to make the first time. So be it. A segment from “The Charlie Rose Show” is a rather long (almost an hour) look at Tarantino’s life. His origin into film, his vast knowledge and everything else relating to the film are all covered here. A bit long, but well worth it if you’re into the film like I am.

The late Gene Siskel and Roger Ebert have a collection of the Tarantino movies from their television program. Aptly titled “The Tarantino Generation”, this segment focuses on the film at hand, obviously garnering praise from the two critics. The various award shows each have a segment as well. Clint Eastwood chaired a jury that awarded the film the prestigious Golden Palm award at the Cannes film festival, but we’re also treated to some footage of the Independent Spirit Awards on the DVD as well. As if we haven’t heard enough praise for the film, a section is devoted to some critics’ comments about the film. We hear more of the same, but if you want some different points of view all saying the same thing, then this is your cup of tea (coffee, rather when we’re discussing this film). Some theatrical trailers “from around the world” are also included as are some TV spots. New to this Blu-ray are “Not the Usual Mindless Boring Getting to Know You Chit Chat”, a roundtable discussion with director Tarantino and the cast reminiscing about the film, it’s cultural impact and what’s been going on since then. The other feature is “Critic’s Retrospective: Here are Some Facts on the Fiction” as we’re joined by five film critics that no one has heard of. Still, there’s actually one of them who’s not a fan of the film and it’s a nice change of pace instead of another Tarantino praise-fest. Recommending this is a no-brainer – it belongs on every shelf. 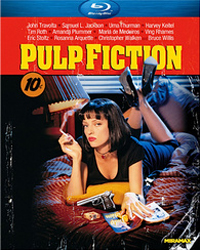