For many people, myself namely included, “Footloose” holds a place as one of the defining movies of the 80’s. Sure, my generation may end in “X” and I hear there’s even a “Y” out there now, thus denoting the inevitable aging process; but I digress. “Footloose”, like so many John Hughes films, wasn’t only something that we watched at the movie theaters, but the songs were so overplayed (at a then “new” MTV) that it’s impossible not to hear any one of them without thinking of Kevin Bacon’s then ever so popular “spike” haircut. I can vaguely remember my mother taking my younger brother and I to the movie saying that it was supposed to be really good and that Kevin Bacon would be a really big star after it. Well, she was right (though upon further review, I suspect she read that in an article…not to take anything away from dear old Mom) and it did bring Kevin Bacon into the mainstream. Still, I prefer him in “Animal House”, but that’s for another time and place.

We meet Ren MacCormack (Kevin Bacon) as he has just moved to the middle of nowhere. Actually it’s Beaumont and it’s the typical town that you might find in the South some 60 years ago. Music and dancing have been outlawed from the town and the kids, though they hate it, go along with it. Ren, though, being the new kid from Chicago, has no trouble blaring Heavy Metal from his yellow VW bug and it’s not too long that he’s stopped by the local law enforcement and given a good talking to. He becomes infatuated with the minister’s (John Lithgow) daughter, Ariel (Lori Singer). Ariel is the typical “minister’s daughter”, rebellious and will essentially do anything and everything to make a statement. Ren, it seems, it just the catalyst that she needs to do this. As Ren’s infectious behavior starts to spread, they want to organize a dance. Ren’s buddy, Willard (Chris Penn) adds a bit of comic relief to the plot as well.

The story is more of a teen angst for the early 80’s (that John Hughes later covered…over and over), but it has some great dance scenes and if you’re into that sort of thing, an unforgettable gymnastics routine by Bacon. I myself skipped that scene! Look for a then very young Sarah Jessica Parker in one of her first roles. While “Footloose” might not have set the world on fire, it was very popular at the time. Footloose is more of a benchmark for 80’s corniness; but it did Kevin Bacon a good start and added a whole new depth and dimension for the Six Degrees of Kevin Bacon game (that even he’s capitalizing on now). Suspend your disbelief for 107 minutes and you might just find yourself singing songs that you thought you’d forget.

It’s been a while since I’ve popped my old “Footloose” DVD into the player. And it looks as if that won’t be an issue any longer since this Blu-ray will take its place. The 1.78:1 AVC HD transfer by Paramount is relatively good. IT shows a much-improved image over the standard DVD counterpart particularly in regards to the colors and fine delineation. Improved contrast is also noticeable as are black levels. It’s not all sunshine, though, as there are still several scenes that seem a bit on the spotty side with some grain, movement in the background and a bit of inconsistencies in the more dimly-lit scenes. The ending dance is a good example of this as it’s very poorly lit and we see abundant grain. Still, on the whole, it’s a much better image than we’ve had previously. I’ll take it.

There are some movies that don’t need to rely on a good soundtrack and some that do. While “Footloose” doesn’t rely on a soundtrack, it does contain one. It was one of the best-selling soundtracks of the 80’s and nowhere does it sound as good as on this Blu-ray. The new DTS HD Master Audio mix is very strong, while not being so artificially-sounding that it’s a turn off. Dialogue is very rich and full and while most of the action takes place in the front stage, the surround channels do add some depth. For a movie that really emphasizes audio, Paramount has hit the mark here.

Let’s face it, the only reason that “Footloose” is out on Blu-ray now is that they’ve decided to re-make yet another classic. The supplements are the same as the previous Special Edition standard DVD. So with that said, we have two audio commentaries, the first with Kevin Bacon solo as he tells of the production and shoot (and the dancing) and almost as interesting is the second track with Producer Craig Zadan and Writer Dean Pitchford. They talk mainly of how to translate the story to screen, the money the movie (and soundtrack made) and so on. Three featurettes are also included, though it’s actually two, just cut into parts. “Footloose: A Modern Musical” is cut into two parts (labeled Parts I and Part II). This essentially covers all of the bases. Interviews with most of the cast and all involved in it. We then have “Footloose: Songs That Tell a Story” which focuses, obviously, on the music of the movie. An interview with Sammy Hagar and Kenny Loggins offers up some exciting information about the music of the film (what it’s mainly remembered for). Lastly we get the theatrical trailer. 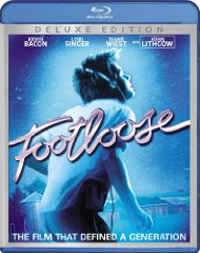