The dark underworld of poker is something that’s not explored in movies, either in the past or the present. Something has happened, though, during the last few years that has brought poker into the limelight. ESPN broadcasts the “World Series of Poker” every year. “Celebrity Poker” is a show that we can tune into and watch on a regular basis. Poker, by true professionals, isn’t really gambling as it is more of a way of life. Yes, money is won (and lost) and the emotional highs and lows are more than most people are willing to experience. However “Rounders” is now six years old and though not that long ago, it seems that poker has really gone mainstream since this movie came out. Judging by the box office, I was one of the very few who saw it in theaters and I’ve watched the old bare bones disc time and time again. Suffice it to say that when this new “Collector’s Edition” was announced – I was very excited. And a lot has happened to the careers of Matt Damon and Edward Norton since this movie as well. Damon and fellow “beantown” buddy, Ben Affleck, aren’t exactly the Golden Boys they were (Affleck has enjoyed more commercial success than Damon), but they’re still both very active making movies. Edward Norton hasn’t lost any of his edge, either. His role as Worm in this movie was great as are all of his performances. In fact, Norton and Damon were actually invited to play in the actual World Series of Poker a few years back. But enough about all that, for those who haven’t seen “Rounders”, well you’re missing out on one of the better low-key dramas in recent years.

The movie opens as Mike (Matt Damon) decides to “make a run”. A high-stakes poker game has come about and he seizes the opportunity to literally put all of his chips on the table only to lose it all. He’s a third year law student and his girlfriend (Gretchen Mol) isn’t too supportive of his gambling habits. Cut to a few months later where Mike now drives a delivery truck. He’s also awaiting the arrival of Worm (Edward Norton), a friend of his who is being released from jail. If Mike is the smart player then Worm is the one who takes all the risks. Worm has perfected the art of cheating on the inside and almost immediately he gets Mike involved in a game with some local rich boys. They win, of course, but Mike has committed to Jo (Mol) that he wouldn’t partake in any more games. The only words of wisdom come from Joey Knish (John Turturro), a player who has ground out a living by folding, folding, folding. But things go from bad to worse when Worm inadvertently gets in debt to Teddy KGB (John Malkovich), a player himself with ties to the Russian mafia. Mike must then take up for his friend, borrow money from his law professor (Martin Landau) and attempt to go on the “run of runs” thereby winning enough to get his friend out of debt.

“Rounders” is one of those movies that just has something about it that I love. While not commercially successful, I think it’s found a good cult following (as evidenced by this new Collector’s Edition) and features a very respectable cast (Damon, Norton, Malkovich, Turturro, Landau and Famke Jessen) to name a few. What’s better is the screenplay by David Levien and Brian Koppelman. The dialogue has lots of “insider” lingo that poker players are used to. It’s a real movie about poker and not some glossed-over production in which the winning hand is a royal flush. Directed by John Dahl, who is noted for some of his efforts like “Red Rock West” and “Kill Me Again”, he seemed to capture the right mood for the movie. If you’re looking for car chases, action, things blowing up and the like then I can recommend “The Italian Job” (for Norton fans) and “The Bourne Identity” (for Damon fans). If you’re looking for a great character/dialogue-driven movie, then this is it. Being a fan of poker doesn’t have to be a prerequisite, but it certainly doesn’t hurt either.

“Rounders” was among the first movies to arrive day and date on the then fledgling DVD format. It housed a non-amamorphic transfer and left room for improvement. In 2004 this was re-released as a “Collector’s Edition” and the transfer was finally enhanced for widescreen televisions. Flash forward another 7 years and now we’ve got the film on Blu-ray. The 2.35:1 AVC HD image looks as good as I’ve seen it, though we’ve been so spoiled by anything and everything HD that this still tends to pale by comparison. “Rounders” is a dark movie, using some earthy tones, shadows and many scenes set at night or indoors. Essentially, a movie indicative of a movie about poker. Colors are strong, yet a few scenes have a bit of grain associated with them. Contrast is strong, though we do lose some detail in a few of the wider shots. All in all it’s the best the film has looked, but it’s not the pristine example of HD.

The movie has never really been renown for its audio. The Dolby Digital 5.1 track found on the previous DVD’s is gone and has been replaced with a DTS HD Master Audio track. Dialogue is the main draw here as Damon’s character narrates the majority of the film. The surrounds don’t get a lot of a workout as mostly you hear some poker chips clacking and cards shuffling. There are a handful of scenes that sound decent, but by and large this is a surround mix. It doesn’t sound bad by any stretch, but again it’s not something that will test the limits of your A/V setup.

There’s nothing new in this Blu-ray that wasn’t found on the previous “Collector’s Edition” DVD some years ago. One thing I will note is that they finally fixed the cover art. Maybe it’s the way I’m wired, but it always bothered me how on the original DVD they had a clean-shaven John Malkovich on the cover when his character had a beard throughout the film. I’ve done a comparison shot between the original DVD and this new Blu-ray in regards to cover art.

The main draw here are the dual commentary tracks (and the new anamorphic transfer). The first features director John Dahl, screenwriters David Levien and Brian Koppelman as well as actor Edward Norton (though it would have been awesome to have Matt Damon there as well). This is pretty informative track concentrating on, naturally, the setup of the movie and mood. It’s a very technical commentary. What’s a bit more fun is the second track with “real life” poker champions Johnny Chang, Phil Hellmuth, and Chris Moneymaker to name a few. These guys seem pretty impressed with the reality of the movie, the lingo and how accurately everything was portrayed. I’m willing to be this was their first movie commentary track and it’s nice to have this second track included. The same guys also give out some very brief tips on playing poker. It’s nothing revolutionary, but a nice feature to have as well. Two featurettes are also included “How to Play Poker” with some interviews with poker legends along with Matt Damon and Edward Norton and a “Behind the Scenes Special”. Essentially it’s not like the promotional fluff that we’re all used to and these two featurettes actually compliment the movie. Lastly, a set top game of “Texas Hold ‘Em” is included. You have to pass a few trivia questions to play with the “Big Boys”, but its fun nonetheless. There appears to be no pattern to the cards, either. So if all else fails, you could play this game for a while. 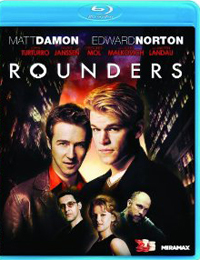