Muneakira Yagyu is already quite skilled as a samurai, but at his new dojo, he can become even better. The dojo is one that hosts numerous pupils with great potential, but perhaps none with more than Muneakira. He arrives and strikes up a friendship of sorts with some of his fellow students, who seem to be torn over political issues. But soon all attention is on Muneakira, when a naked girl falls from the sky and lands in his arms. As odd as this turn of events seem, it gets even more unusual soon enough. The naked girl is Jubei and when she kisses Muneakira, she undergoes an instant transformation. Now she finds herself to be a master samurai, just from a passionate smooch. Of course, this being a school to learn the ways of the samurai, the other female pupils realize they too could advance in such a manner. In the middle of the various conflicts within the dojo’s residents, can Muneakira master his skills or will he be too distracted by girls that always seem to surround him? And what is this special power he possesses, who is Jubei, and is Muneakira some kind of mystical master samurai?

I’ve seen countless anime series, but few have had the kind of visual excellence of Samurai Girls. This is like a kinetic work of art, simply beautiful animation design. But Samurai Girls’ style comes at the expense of substance, as the series is thin on plot, while reliant on visuals and fan service. While the story isn’t complex, it does make numerous historic references, which is odd given the brisk nature of the script. While style dominates, when the visuals shine as brightly as these do, its hard to be overly critical. After all, nearly naked hot chicks with samurai swords are awesome, but when injected into this kind of visual design, the cover is right when it says the samurai code has never been this sexy. I doubt Samurai Girls will win over those with no interest in fan service anime, but genre fans will find a lot to love with this series. And even if you normally don’t seek out this kind of anime, you should give this one a chance just to soak in the remarkable visuals. Samurai Girls might not have a lot of plot, but it looks magical and is fun to watch, so it is well recommended.

The episodes are presented in 1.78:1 widescreen. This is the kind of transfer that reminds us why we love high definition. Not just one of the best anime treatments I’ve seen, this is one of the best looking transfers I’ve seen, period. The series’ incredible visuals stream to life here, with crystal clear images that never fail to dazzle. All of the smallest details within the animation are evident here, while colors are vibrant and bold. No issues with black levels either, as contrast is picture perfect throughout. In short, this is demo level visual performance, simply excellent from start to finish.

This DTS HD 2.0 soundtrack preserves the original Japanese voice talent and sounds quite good. While the lack of surround does hinder the experience, this series still comes through well. The vocals are crystal clear and dynamic, while sound effects are well placed also. The music also sounds terrific here, though it would have benefited from more expansive presence. So while somewhat limited, this soundtrack still delivers the goods. This release also includes an English language version, as well as English subtitles. 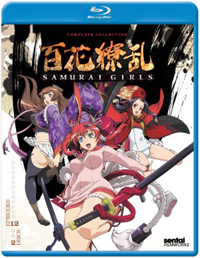