Looking at the year 2016, it will likely go down as one of the more “interesting” years on record. The Chicago Cubs broke their 108 year drought and won the World Series, we’ve had countless celebrities and entertainers die far too young and the United States elected Donald Trump as the leader of the free world. Oh and we’ve now got an R-rated Pixar movie. I will say that the word Pixar is nowhere near this film in any way, shape or form. Seth Rogen, love him or hate him, has had a passion project for several years now and this is it. Sausage Party is the story of food inside a grocery store and how they deal with going out into “the great beyond.” Of course Rogen is surrounded, vocally, buy his loyal partners-in-crime, but this foul-mouthed computer animated comedy is much more than the sum of its parts (“parts” in this case would be voices). Parents, keep the kiddies far away from this one – it’ll scar them for life!

Life is boring inside a grocery store if you’re a customer, but that’s not the case for the items of food that we meet. Frank (voiced by Seth Rogen) is an idealistic hot dog who dreams of one day being inside Brenda’s (voiced by Kristen Wiig) soft bun. It’s the 4th of July weekend and odds are that these items will get purchased and will find their way to “the great beyond”, a place they know nothing of but all aspire to visit. As fate would have it, Brenda and Frank are both purchased and are on their way, but Honey Mustard (voiced by Danny McBride) has seen “the great beyond” and it’s not all it’s cracked up to be. In fact, it’s horrible! Frank, Brenda and an assortment of items manage to escape after being purchased but not before a few of them are lost along the way. Couple that with a douche (voiced by Nick Kroll) whose single-minded mission is the only thing on his mind, and you’ve got, well somewhat of a mess. Will Frank ever be inside of Brenda? Will the douche carry out his evil plans and why is “the great beyond” so awful?

Admittedly it takes a lot of talent, time, effort and energy to bring something like this to the screen. But Rogen and frequent collaborator Evan Goldberg have finally made it happen. If you’re easily offended, get upset when you hear the “F” bomb dropped or might be offended at the thought of a hot dog and a bun “just touching tips” well this isn’t the movie for you. But if you can put all of that aside, this foul-mouthed comedy isn’t actually half-baked. Rogen leads the way and he’s got help in the vocals department with Edward Norton, Salma Hayek, James Franco (are you really surprised) and Kristen Wiig among others. I don’t know if this will change the way I look at food, but if you can imagine a cross between Toy Story and Team America: World Police, that might be the most accurate comparison I can make. Rude, crude and not for everyone – Sausage Party will leave you satisfied.

Admittedly, most of my reviews of computer-animated films are more geared towards children. But just because the subject matter might be offensive, don’t let that detract from the fact this is one amazing-looking film. The AVC 2.40:1 HD image is indicative of what we’ve come to expect both from a new to Blu-ray film and a computer animated one at that. “Textures” on the food, for lack of a better word, have a plastic/rubberish look to them, but when your main character is a hot dog – it seems to make sense. The colorful world inside and outside of the grocery store is rich in depth and information and even little things like the homage to Saving Private Ryan early on in the film have a great quality to them. It’s a good-looking movie that’s sure to be the centerpiece of your system.

Alan Menken’s score is well used here, but it’s not a one trick pony by any means. Vocals are pure and rich and I always like to see if I can identify the actor who portrays the characters in the film. There are actually some very interesting and highly impressive elements of sound on this DTS HD Master Audio mix and I was duly impressed. Range is encompassing, the center channel strong and I found the audio well dispersed. It’s not something that will shake the walls, but this film makes excellent use of the sound.

There’s no two ways about it, you’ll either love or hate this. Puns (and buns) galore, celebrity voices and more foul-mouthed humor than you can shake a douche at – Sausage Party isn’t and won’t be for everyone. But it’s funny an the disc looks and sounds great. Again…keep the little ones away! 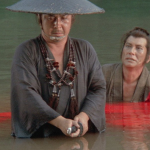 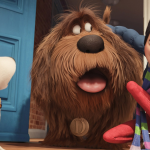