Do animals talk? No, they can’t right? Can they? You have to wonder what a dog does all day when you close the door and head off to work. I would find it hard to believe that they turn on the TV and chill out for the better part of the day until their owner gets back. That would be insane. No, rather I think they just sit there and sleep. But if they did that then we’d have no movie, would we? As you’ll see over and over in the supplemental materials, The Secret Life of Pets is a product of Illumination Pictures and if that name rings a bell it’s because that’s who produced Minions (who even turn up on this disc a few times). But with all of the “pet friendly” people in this country, clearly this movie was either a distraction or entertainment for the kiddies as the movie was one of the most successful of the year. Raking in nearly $400 million domestically, this is a bona fide hit and I’ve a feeling we’ll see Max and friends again (and again, because Hollywood likes to make money).  So grab your leash and get ready because it’s time to finally find out what happens when you leave the room…

The Secret Life of Pets takes its inspiration from a rather well-known film called Toy Story. Heard of it? Only instead of toys talking when people leave the room, it’s your faithful (or not so faithful) dog or cat. Max (voiced by Louis CK) is a little dog living in NYC with his beloved owner Katie (voiced by Ellie Kemper). Katie brings home a new dog, a large and hairy stray named Duke (voiced by Eric Stonestreet), much to Max’s dismay. Seeing him as competition for Katie’s affection, Max conspires to get rid of the intruder. In the process, both dogs manage to escape their domestic dwelling and end up “loose” in the city. They encounter an evil bunny named Snowball (voiced by Kevin Hart), who oversees a vicious gang of abandoned pets and harbors a grudge against all “domestics.” Meanwhile, the little lapdog Gidget ( voiced by Jenny Slate), who’s in love with Max, launches a mission to find him once she realizes he’s not home. Helping out are some other pooches, Mel (voiced by Bobby Moynihan) and Buddy (voiced by Hannibal Buress), a cat named Chloe (voiced by Lake Bell), and a predatory bird, Tiberius (voiced by Albert Brooks). Can you see where this is going?

Truthfully, there’s not a whole lot that really stood out about this movie. Yes, it’s bright, fun and cheery, but these animated films have all become so similar that it takes something special to really make me enjoy them. And don’t me wrong, the movie is enjoyable, but it just seemed kind of…there. And the blatant “tip of the hat” to Toy Story made it even less original. But hey, imitation is the most sincere form of flattery, right? Truthfully the vocal talent is top notch and any film that has the foresight to cast Albert Brooks either in live-action or vocal form has got something going for it (in a good way). Kevin Hart is doing his usual mile-a-minute routine and we’ve got a slew of other talent thrown in for good measure as well. The bottom line (well I guess that’s below) is will kids like it? Absolutely. Are there other animated films out there that I feel are more entertaining? Yep. But looking at the facts, it’s hard to deny that this film hit home with people – and a lot of them.

As we might expect, the 1.85:1 AVC HD image is nothing short of perfection though I will say that in a few of the arial shots, I seemed to notice a bit of banding in the sky. I’d thought it was something else, but I went back and watched it again and, sure enough, there it was. Now this is a minor complaint and something that shouldn’t (and won’t) detract from the overall experience. New York is meant to look bright, cheery and fun and they do a good job of it. Even the back alleys where we meet the evil gang of cats looks pretty nice. Detail is immaculate, textures are rich and detailed and aside from what the humans look like (anexoric), it’s everything you’d expect from an animated film.

The included DTS HD Master Audio soundtrack leaves no room for complaints either. The voices are crisp and free of any distortion and as I’ve said in other animated movies, I like to make a game trying to see if I can guess which actor voiced which role. Admittedly I was pretty off base with Louis CK as Max. Surrounds are used effectively and even the LFE had a few moments to shine. It’s a lively, vibrant track that’s both dynamic and entertaining so I’m sure that the viewer will have no complaints.

The Secret Life of Pets was one of the biggest commercial hits of the entire year. It’s got everything that makes an animated movie successful, so it’s really not that much of a surprise. The movie both looks and sounds great, and the supplements do get a tad bit redundant. Still, I’m sure the kids will love this one and there’s no reason not to add it to your collection. 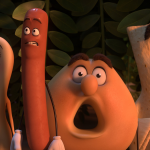 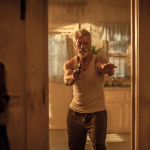