Tina Fey and Amy Poehler play sisters who connect again and decide to throw a party at their parent’s house before they sell it. Fey stars as Kate, she has a daughter she hasn’t a teenage daughter that she hasn’t seen for a couple of months, and as of recently, is unemployed. Poehler plays Maura, and while she has a steady job as a nurse, she’s recently divorced and tries harder to help other people reconnect rather than herself. Maura learns before Kate that their parents are planning on selling their childhood home. When she and Kate drive up to the house, they’re surprised to see that it’s already been sold. Their parents want them to clean out their stuff from the house before the sale is finalized. They both sleep in their house and meet the future owners the next morning. There’s some fun back and forth banter between the sisters and the couple that’s moving in. Eventually Kate convinces Maura to hold one last party in the house. We see them decorate the house and await the guests to arrive. At first, the party seems like it’s DOA as guests do arrive, but mostly keep to themselves. Maura hopes that their neighbor, James (Ike Barinholtz) shows up, and he does in fact. She’s developed something of a crush on him as the two sisters met him as he was doing yard work earlier. In order to kick things up a notch, the sisters ask a High School friend to call up a drug dealer. John Cena plays the dealer and manages several laughs, mostly by playing it straight and letting the laughs come naturally. This pretty much sets the film in motion. We see two sisters enjoying one last party at their house before moving on.

If the premise sounds most than a little flimsy, that’s because it is. I was perfectly OK with that as Fey and Poehler manage several laughs out of it. We’ve seen these two paired together on SNL and other works, but here, they’re allowed to let loose and have free range. The film more than earns its R rating. I enjoyed their previous film, 2008’s Baby Mama, but it felt a bit limited and not as funny as it could have been. While there’s a sweet message here under all the vulgarity, the film avoids being preachy or heavy handed. It does run too long, and would’ve benefitted from a shorter running time. There are several amusing supporting roles here from John Leguizamo, John Cena, Maya Rudolph and Bobby Moynihan to name a few. You’ll see several familiar SNL alums here. Some of the running gags do wear out after a while. Moynihan gets some solid laughs, but we keep cutting back to his character a bit too much. Also, the subplot involving the Maya Rudolph character feels a bit unnecessary. Still, I laughed more than I expected and the film is worth checking out.

The cast of the film are most all in their late 30’s to 40’s. That’s ok, but the quality and definition of Blu-ray doesn’t do any favors to those advancing in years and the clarity of the image might make a few cringe. Don’t get me wrong, I don’t think that Amy Poehler and Tiny Fey are by any means unattractive, but let’s just say that all things considered – I’d rather see a bunch of 20 year olds. That said, the overall clarity of the 2.40:1 AVC HD image is rock solid. Colors and bold and bright, there’s no artifacting, black levels are strong – we all know the drill. A few scenes seem a bit on the burnt side, so it detracts from a perfect score but not by much. Viewers won’t be disappointed by any means.

A surprisingly robust DTS HD Master Audio track is included which had a range I wasn’t really expecting. Granted, most of the conversational dialogue is improvised comedy, but surrounds are used a few times with great effect, directional effects come into play as do the LFE for the big “pool collapse” scene. While other movies out there sound better, comedies are generally relegated to slapstick humor and low quality sound. Nevertheless, this one has its moments and I found it a very satisfying track.

Despite a flimsy premise, Sisters coasts by largely thanks to Tina Fey and Amy Poehler. The film is a bit long and might be too vulgar for some, but for those not easily offended, it comes recommended. 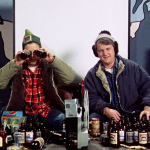 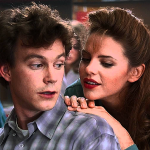