I love films made in the eighties. I can’t quite pinpoint exactly what it is about this period of filmmaking that grabs me so much, but my best guess would just be the fact that I was born in 1985 and absorbed the wood grain and neon color schemes that dominated the period into my subconscious. Essentially, watching a film from the Eighties feels incredibly safe and nostalgic even if I have never seen the film before. Recently Arrow Video sent me a copy of Stormy Monday which was released in 1988. The film is directed by Mike Figgis who would later direct the excellent and ultra-depressing Leaving Las Vegas. If it is a film from the Eighties and Arrow Video releases it, typically it is well worth my time, so I was excited to check it out.

Stormy Monday takes place in Newcastle, England. The plot revolves around a janitor for a club named Brendan (Sean Bean) and a waitress/call girl named Kate (Melanie Griffith.) Brendan is given an opportunity to work as a driver for his boss, Finney (Sting.) He is meant to escort some of the club’s talent: a jazz ensemble from Krakow. Brendan overhears some menin a bar talking about taking violent action against Finney and Brendan gives Finney a head’s up.  Simultaneously, Brendan meets the intriguing Kate who is in trouble with an American business man named Cosmo (Tommy Lee Jones.) As Brendan and Kate become romantically involved, Cosmo makes a play to take over the club from Finney, threatening violence if necessary. Kate and Brendan get tied up together in the middle of the conflict.

Stormy Monday is a good example of why I enjoy the films from the Eighties so much. Director Mike Figgis tries his best with help from legendary cinematographer Roger Deakins to channel the neon-tinged colors of American films of the time from onto somewhat dreary Newcastle. This is an interesting juxtaposition, because it is essentially a noir film. When you add on top of that Mike Figgis’s jazz-fueled score, the film watching experience is pretty unique. One of the main reasons the film holds interest is it tackles interesting ideas like the threat of America’s business influence on Britain, while delivering normal noir tropes that audiences will be familiar with (the call girl with a heart of gold, small hustler gets in over his head, etcetera.) It also functions pretty well as a romance, even if it is a little bit cliche.

Tommy Lee Jones is absolutely brilliant as the relaxed and villainous all-business Cosmo. He steals the entire movie. Sting’s performance is also surprisingly good, and Sting allows his cockney accent to shine through to great effect. Sean Bean and Melanie Griffith are good in their roles, but their characters are fairly flat compared to the others.

Overall, I can completely understand why Stormy Monday has become a bit of a cult classic. It has a unique feel to it that is completely its own. That said, it is not a complete home run. The main characters are not nearly as interesting as the side characters which can take away from scenes that are dominated by the two leads. Overall, I really enjoyed the movie and am glad to have it in my collection. Given that this is a true cult film, I would expect some people to love it and some people to not care for it. Therefore, a rental may be a good call prior to a purchase.

Arrow did a solid job on the transfer of the film using an MPEG 4 AVC codec of a 2K restoration. The film itself was lenses by notable cinematographer Roger Deakins, and his use of neon light is interesting given the Newcastle locale. The film looks good on Blu-Ray, with fairly sharp focus given the time period. There is some occasional softness , which should not surprise anybody given that the majority of the film takes place at night. Fans of the film will be glad to see the excellent care given to the material.

A very capable DTS-HD Master Audio 2.0 track has been provided. The jazzy score from Mike Figgis is really fun and adds a lot to the film. This is pretty immersive for a 2.0 Track and many times sounds good enough to pass for 5.1.  The dialogue is crisp and clear and I did not notice much hiss. Directionality is pretty good on this release , and like other Arrow releases fidelity is very strong to the original elements. I was pretty surprised by this track’s quality!

Stormy Monday is an enjoyable and unique noir romance from the Eighties. I love the way the film looks and feels. Tommy Lee Jones and Sting are both great in their roles. That said, the main characters are a little bit flat, which may throw off some viewers. The supplemental materials are not robust but are interesting. Fans will enjoy the care that Arrow has given the film. Given the cult quality of the film, a rental may be recommended prior to a purchase. That said, I am happy I have this in my collection. It’s a pretty cool little flick. Recommended 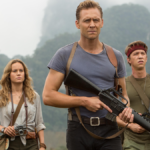 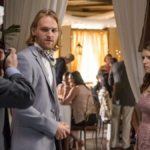