For those that don’t know, The Ides of March is a phrase that goes back a couple thousand years. It was uttered by a soothsayer to warn Julias Caesar of his impending death. “Ides” means middle and the middle of March was the 15th. That’s when Caesar was killed. Ok, that’s your history lesson for today. Now onto politics. First and foremost, I’m a horrible American in that I’ve never voted. But I’ll do anyone who might be offended at this the courtesy of explaining myself. I long ago figured out that my vote doesn’t really matter. The votes for President are determined by the electoral college and not the popular vote and after the debacle in Florida in the 2000 election – it destroyed what was left of my faith in the system. Hence, I don’t vote. Then again I don’t complain about the Government, either. It’s a nice little conundrum I’ve worked out for myself. But for every “me” there are countless of others who are obsessed with politics and the political system as a whole. And, as of this writing, it’s an election year (2012), so for those who enjoy politics then it should be a great year for them.

“The Ides of March” focuses on Democratic hopeful Gov. Mike Morris (George Clooney). He’s clean cut, has led the state of Pennsylvania to new heights and has set his sights on the brass ring. His main opposition is a Senator from Arkansas (Michael Mantell). We zero in on the Ohio primary and with Morris in a lead, Ohio is the state that can either cement his victory of serve as a turning point in the campaign. Stephen Myers (Ryan Gosling), an idealistic Junior Campaign Manager, is setting the stage for a victory. However when he accepts a meeting with the Campaign Manager (Paul Giamatti) from the opposition, it’s all downhill. Myers is subsequently fired but not before having an affair with an intern (Evan Rachel Wood). Myers must now face the real possibility that he’s out of the political arena that he’s worked so hard to get into. But as with politics, there’s always an angle and he’s got one bit of ammo that he can use as leverage. The question is will he do it? Can this idealistic person who truly believes in the “system” turn the dark side to get what he wants or will he accept his fate?

I have no doubt that most everything we see in “The Ides of March” is true. I think pretty much every politician out there is dirty in some sort of way and especially those that rise to the rank of President. The movie was based on a play “Farragut North” and then fine-tuned by screenwriters Grant Heslov and George Clooney. Though no characters are real, they’re based on actual people. As good as the script is, I tend to think that it might have benefitted from the work of, say, Aaron Sorkin. Then again maybe he was busy with “Moneyball.” The ensemble cast is what really drives the film and with the likes of George Clooney, Phillip Seymour Hoffman, Paul Giamatti, Ryan Gosling and Marisa Tomei – it’s kind of hard to lose. The film is pertinent to our system and somewhat disturbing to see at the same time. There are plenty of fine performances and Clooney’s work behind the camera shows that he’s just in good in the role of Director as he is Actor.

The movie is presented in a 2.40:1 AVC HD transfer that’s very indicative of a new to Blu-ray release. The wide screen is filled with detail and imagery that gives new meaning to the word “detail.” The film has a very muted color palette that still manages to look lively even though the majority of the movie takes place indoors or under an overcast sky. Flesh tones seem to be a bit on the overcooked side, though the image is so crystal clear that we can see the flaws in the actors’ skin (except Evan Rachel Wood). Black levels are on the mark and contrast is as it should be. This is a fine effort from Sony and I find it hard to find nearly anything wrong with the image.

There’s a lot of talk in the film as there is in mostly any movie about politics. There are no car chases, no gunfire and nothing blows up (nor would we expect it to). That said, this is about as “dialogue-driven” as one might expect. The vocals sound rich and full, especially Phillip Seymour Hoffman’s deep voice. There are a few instances in which the surrounds come into play but even their part is so subdued that the mix might be best described as stereo. By no means is this a bad-sounding mix, but it’s not one that will test the limits of your system, either.

We get a sampling of extras on this Blu-ray release and the most notable of which is the commentary with George Clooney and co-writer Grant Heslov. The two have obviously worked long and hard on this film and they play off one another throughout. It’s actually quite a nice track and Clooney’s attention to detail is pretty impressive. It’s a nice listen. The remainder of the supplements are a quartet of featurettes that focus on the film and the path from script to screen. “Developing the Campaign: The Origin of The Ides of March” focuses on what brought the screenplay to light and the author of “Farragut North”, Beau Willimon, is interviewed. “Believe: George Clooney” is essentially the cast showing Clooney with accolades and “On the Campaign: The Cast of ‘The Ides of March'” shows the casting – essentially they got their first choice for everyone in the film. I guess that’s how it goes when you’ve got Clooney involved as an actor, writer and director? Finally “What Does a Political Consultant Do?” answers that question. A real-life political consultant is interviewed and he tells us that the role has no boundaries, but the pay is ridiculous and you essentially don’t need a soul. Sounds fun. 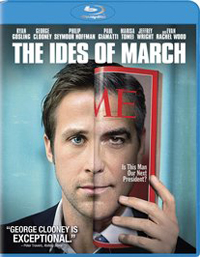