I was channel surfing the other day and caught a bit of “Patch Adams”, a movie which I’d never seen. I didn’t watch the whole thing but I was familiar with the plot. The 80’s saw the rise of a young comic by the name of Robin Willaims and he made his mark (or “Mork”, rather) in television on the show “Mork and Mindy” in which he played an alien trying to learn how the humans “worked.” As anyone could see, Williams’ immense talent was far too big for the small screen and he made several notable films including “The World According to Garp”, “Moscow on the Hudson” and “Good Morning, Vietnam.” He also has the innate ability to do comedy as well as he does drama, though it’s been a long-running joke that “Dead Poets Society” is one of the few dramatic roles in which he didn’t sport a beard. Many feel that his role in this film is his best, though ironically he won a Best Supporting Actor Oscar a decade later in “Good Will Hunting.”

Williams plays John Keating, a graduate of a prestigious New England prep school. Keating is the new English teacher, though the film focuses on a group of students. Painfully shy Todd Anderson (Ethan Hawke) is trying to live up to his brother’s reputation. Class clown Charlie (Gale Hansen) rebels against the institution and Neil (Robert Sean Leonard) wants to pursue a career in acting, though is over-bearing father (Kurtwood Smith) wants him to be a doctor (ironically enough, actor Leonard would later go onto fame in television’s “House, M.D.” playing a doctor). As privileged teens, these boys have it all but it’s not until they meet the quirky Mr. Keating who teaches them to “suck the marrow out of life.” The students reform a group that Keating was part of entitled “The Dead Poets Society” as they find a newfound interest in their studies. Naturally every character has their own obstacle to overcome and some do and others…don’t. However it’s the inspiration given by Keating that gives the students the confidence to do what they once couldn’t.

I’ll come out and say that I think that “Dead Poets Society” is far and away the best role that Robin Williams has ever had. Yes he was good in “Good Will Hunting”, but I feel that role was a bit engineered for him to win an Oscar whereas he really deserved it more in this film. Then again, if everyone got an Oscar for the role they should have, we’d have a lot of winners for some very different roles. The ensemble cast is what really makes the film work and this movie served as a launching pad for young actors like Josh Charles, Ethan Hawke and Robert Sean Leonard. As for Willaims, it was another critical and commercial hit for him and he’d have a few more in the years to come with films like “Aladdin”, “Mrs. Doubtfire” and “Patch Adams.” If you’ve never seen the movie, it’s not to be missed and it does somewhat break the mold of the “New England Prep School” films that are out there. Director Peter Weir is in top form here.

I’ve seen “Dead Poets Society” in just about every format possible from VHS to LaserDisc to DVD and now on Blu-ray. The 1.85:1 AVC HD transfer looks, for the most part, very good. There are a few shots that come off as a bit soft, though on the whole detail has been improved. The color palette is a bit muted as many of the scenes are shot indoors and in dorm rooms and while this might lend itself to a somewhat darker look, it’s pulled off quite nicely. Keep in mind that the film is also approaching its 25th anniversary and I don’t think too many fans will be disappointed.

This movie has and never will be an audio powerhouse, so if you’re looking for something that will blow the roof off the place then you might want to look elsewhere. A new DTS HD Master Audio mix has been made for this Blu-ray and though vocals seem strong and consistent, there’s not a whole lot else going on in the other channels. The surrounds are present, but not really that active. This is one of those films that really doesn’t matter how good the sound is as the action on screen will be more than sufficient.

Disney has released this on Blu-ray and the supplements mirror the DVD that came out a few years back. We find no new bonus features here, but are left with what was then “new” on the old standard DVD. First off we have “Dead Poets: A Look Back” as the reminisces about the film. These are mostly the “kids” in the film that are now in their 30’s (probably their 40’s by now) as they tell of the good times they had making the film. We get some “Raw Takes” of unused footage as well as “Master of Sound: Alan Splet” which is a look at the Academy Award Winning sound designer. We also get a crash course in what it takes to be a DP (Director of Photography) as well as the film’s original theatrical trailer. 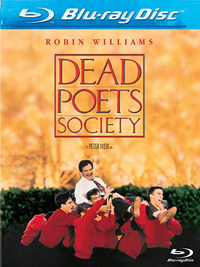