Based on a failed television show called “Police Squad”, “The Naked Gun” didn’t have a lot of history. Police Squad was up against “Magnum P.I.” and “Fame” on the other networks, and this was in the days of “the big three”. Needless to say, after the first episode, the directors found out that it was cancelled, even though three more of the episodes (of the original six) ran. When it came time to make a movie, another slapstick, goofball movie that is, it was none other than Leslie Nielsen (who also starred in the series) that took the lead role as Lt. Frank Drebin. Now, Leslie Nielsen used to be a dramatic actor, and I’m sure he could be again, but he seems content to spend the rest of his acting career doing slapstick parodies of other movie…but we all still laugh, so it will likely be a continuing trend. From his days in movies like “Forbidden Planet” and “The Poseidon Adventure” he was a nice (if not perfect) fit for the lead role; also a role that was sort of spoofed in the earlier Airplane! Movies.

We meet Frank Drebin as he’s right in the middle of an undercover operation somewhere in the Middle East. I personally don’t know what a police officer would be doing in that situation, but if you try and make sense of any of “The Naked Gun” movies, you’re missing the point entirely. Another serious actor, George Kennedy (who won an Oscar for Cool Hand Luke), plays his partner Ed. What the whole thing boils down to is that Police Squad has been chosen to protect Queen Elizabeth on her visit to Los Angeles. Drebin and the gang are to be on their best behavior, while at the same time trying to protect Her Majesty’s safety. The one thing that’s standing in their way is local millionaire and businessman, Vincent Ludwig (Ricardo Montalban). Ludwig has devised a scheme, for several millions of dollars, that can turn any normal person into an assassin by the flick of a switch. It’s up to Drebin and Police Squad to stop him at any cost, but at the same time convince the Commissioner that it’s indeed Ludwig that wants to take the Queen’s life. Ludwig’s assistant, Jane (Priscilla Presley) is assigned to cooperate with Police Squad in any way, and in the midst of this also falls in love with Frank. In a nutshell, that’s it. What is so funny about these types of movies (the same team also did the Airplane! movies) is the stuff that happens for no apparent reason, the stuff in the background and the way that no one seems to really grasp what is actually happening.

A major member of the cast is O.J. Simpson, the one and only. Playing the role of Detective Nordberg, he is quickly and in a very humorous way, put in the hospital. While “The Naked Gun” may not be exactly what you’re looking for in terms of plot and acting, it’s probably one of the funniest movies to ever grace the screen. It’s in my top five for sure. While some of the jokes are a bit dated, this movie contains the timeless slapstick humor that compares to the likes of “The Three Stooges”, stuff that is timeless. If you’ve never seen any of these movies, then treat yourself. Fit for a person of any age, this movie will have you rolling.

Paramount is somewhat hitting and missing with their catalog titles, but “The Naked Gun” does boast a newly re-mastered picture. The 1.78:1 AVC HD image looks a bit cleaner than it has in the past, though there’s still a bit of residual grain on some of the scenes. Overall the clarity is a step up from the DVD version, colors seem warm, detail has been improved and I detected no hint of edge enhancement. This is the best I’ve seen this movie look and if you’ve never had the chance to check out this (or any other films in the series) then what better time than now?

The movie now sports a re-mastered DTS HD Master Audio soundtrack that has a few moments, but it’s more along the lines of a very good-sounding surround track. The slapstick, physical comedy has a few moments where the surrounds come into play. Dialogue is very strong and well-centered, Leslie Nielsen’s powerful voice is never distorted. The comedic score sounds good and we’re even treated to Herman’s Hermits’ video “Into Something Good.” This is a decent mix, though nothing I’d write home about.

Unfortunately the supplements are the same here with the audio commentary by the David Zucker and Robert Weiss. While not on par with that of “Airplane!” this is still a good listen. Also included is the original theatrical trailer. Lastly, as of this writing, this along with “Airplane!” and “Planes, Trains and Automobiles” is only available at Best Buy. I’m sure that will change in the future, but as of right now that’s the only place where you can pick this up. 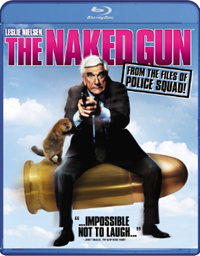