The film begins in prison as Terry Tsurugi (Sonny Chiba) arrives in a prison cell disguised as a Buddhist priest. He meets with a man named Junjo whom is sentenced to death. Tsurugi performs a rare karate move that allows the man to have a weak pulse and be knocked out by the blow about ten minutes after it occurs. This allows Junjo to approach the gallows before he loses his functionality. By law, Junjo must be revived and therefore his death sentence is pushed back until he is in full health. When Junjo is taken out by ambulance, Terry and his associate Bad Nose hold up the ambulance and steal Junjo, escorting him to safety in Hong Kong. When Junjo’s brother and sister fail to pay for their brother’s escape, Terry fights them both. The brother accidentally falls to his death so Terry sells Junjo’s sister into the sex trade to be compensated. Meanwhile, oil heir Sarai gets news that her billionaire father, the third largest oil producer in the world, has died in Cairo. Terry is hired by the Yakuza, the Hong Kong Assassination Group, to kidnap Sarai for 60 million yen. When Terry decides to offer his services instead to Sarai, the Yakuza put out a contract on Terry.

Return of the Street Fighter

As the movie begins, two accountants are put up for a hit from Isamu Otaguro. They had embezzled funds. The street fighter agrees to take the job for double the money. First, he intentionally becomes arrested to get to his first assignment and silence him before the accountant can reveal details of Otaguro’s operation. With success, Terry escapes from the headquarters. The disgraced policeman Shichiro Yamagami resigns from the force when he is taken off the case. Terry tracks down the accountant who was headed for Australia, but before he can get to him the police have a shoot out with the accountant. Tsurugi manages to grab the case the accountant was carrying and make his escape. Yamagami arrives at a karate school run by Masaoka to try to track down Tsurugi. He explains that Otaguro is working with the mafia to raise funds that he is funneling through a karate school. When confronted by Masaoka, Otaguro claims that he has received the funds with enthusiasm for the new karate center. Otaguro contacts Tsurugi to kill Masaoka, but Tsurugi refuses. Otaguro is forced to put out a hit on the street fighter, who has also taken in a Korean female sidekick named Pin Boke.

In the third installment, Terry Surugi gets his hands on some property that the district attorney and numerous mobsters want. Terry comes into possession of an audio cassette. There are two audio cassettes that when played together simultaneously explain a method for synthesizing a pound of heroin for roughly $200. Terry navigates a sombreroed “Mexican” tough guy, a duplicitous female crook, and the police and numerous mobsters in the final film of the series. Terry has also picked up an additional skill since the second film – he is now a master of disguise.

“You’re not a man. You’re a miserable crawling cockroach.”

This is just one of the many great one-liners from The Street Fighter.

All three films are very fun to watch but the first film stands above the others. The first film features the most interesting storyline and has some really amazing fight sequences. Sonny Chiba establishes himself as an icon in the lead role. Chiba was in many ways the Japanese answer to Bruce Lee and was an exceptionally talented stunt man and martial artist.

Over the course of the three films Terry becomes a more likable character. It is not often that a “hero” in a film is as ruthless and selfish as Terry is in the first film. He literally sells a girl into the sex trade early into the first film. That is not something that flies in most films. While the anti-hero qualities of Terry may turn off some viewers, I personally thought these decisions made the films much more interesting. By the third film, Terry has basically become a hero and the film suffers from that. So… as far as the films go, I would argue that the first film is the best, the second is a pretty good sequel, and the third is fun but not up to the standards of the first two films. The first film ends on such a high note that the other films would struggle to top it. It has an ending that ranks as one of the great Japanese martial arts endings of all time. Luckily, the second film has some really bizarre events that make it very entertaining. I will not spoil those here. While the series exemplifies the law of diminishing results, this isn’t as egregious as Terminator 3 or Matrix Revolutions. Think of it more along the lines of Rambo 3 or Rocky 3. Very entertaining and enjoyable but not as good as the first two.

Watching these three films back to back to back is a unique thrill. From the crazy breathing exercises performed by Sonny Chiba to the fights in places ranging from boats to snow caps to saunas, the films have a lot to enjoy. By the third film, Terry is like Ethan Hunt from Mission Impossible. It is fun to watch the films continue to adapt themselves over the course of only two years – 1973-1974.

Shigehiro Ozawa directs the films stylishly. I loved the black and white flashbacks to the previous films that were imitated by Tarantino in his Kill Bill series. I also loved the special effects sequences whenever someone was meant to be falling from a high place. The films look great and grab attention but they never try too hard to wow the audience with technical prowess.

One aspect that made me laugh but may be a deal killer for some is the hilarious cultural appropriation in the films. It is like the filmmakers had never laid eyes on an Arab, Mexican, or American. Cultural stereotypes are put in the forefront and add (or detract) to the appeal of the film.

Also, the soundtrack is fantastic. It has that great guitar sound that was prevalent in the Japanese action films of that time. Fans of the record label Light in the Attic Records will dig the jams on display here.

Overall, these movies are a blast. They have been loved for what they are for forty five years and thankfully they are finally getting the release they deserve. This new Shout!Factory set is a gift to lovers of Sonny Chiba films and martial arts pictures. Don’t hesitate to purchase this and watch Terry crack some skulls.

Before the first film starts, this note is displayed on the screen:

“This presentation of The Street Fighter comes from two sources. A new 2K scan of the color reversal internegative of the shorter English Language cut and an earlier HD master of the Japanese cut. We have matched the color for both sources for a balanced presentation.”

The Street Fighter Collection has been given the royal treatment by Shout!Factory. These films have always looked pretty bad on every format. This is largely due to the fact that Toei is not known for providing the best transfers of their films. This really is a shame given the amazing films that they have at their disposal. Thankfully all of the films in this set have been given a new 2K scan from the color reversal internegatives of the English versions. All three films have been presented in their Uncut versions adding in footage from the Japanese versions to fill them out except for the third film. To see the full uncut version of that film, you must watch the Japanese version which has roughly four extra minutes of footage. The results are pretty spectacular. When watching the films, it will become pretty obvious which scenes are from the Toei transfers. As a fan, I was honestly thrilled at the level of detail on display in these Blu-ray’s. Keep in mind, that these films are not going to suddenly look like Francis Ford Coppola films, but they have never looked better. In a perfect world, Shout!Factory would bring us new 2K scans of The Bodyguard and Golgo 13 next. This is some of of my favorite restoration work that has occurred in the last year.

Shout!Factory have done a solid job in their presentations of the film’s English and Japanese mono tracks. I watched all three films in the English dub which occasionally has some hilarious voice acting, but the tracks were all enjoyable. It is easy to write off these tracks with their flat sound effects and lack of immersion, but to me it was very obvious that Shout!Factory had put some hard work into cleaning these tracks up. As a fan, I was pleased. This is easily the best these films have ever sounded.

The Street Fighter Collection is one of my favorite releases thus far from Shout!Factory. The three films that make up the series have never looked or sounded better. The 2K scans are going to blow away fans of the films. The supplemental package is fairly light, but the interview with Sonny Chiba is fascinating. Hopefully fans will purchase enough copies of this set to justify bringing more Sonny Chiba films onto Blu-ray. Honestly, if you are a fan of these movies, you should purchase this set immediately. If you are just discovering Sonny Chiba for yourself – have a blast! 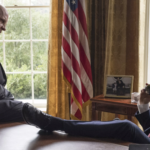 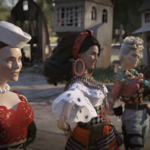