In recent years I’ve become much more of a fan of Liam Neeson. I’ve never considered him a dull, talentless actor (though some have), but I’ve really come to enjoy his recent work in such marquee films like the new “Star Wars” movies, “Batman Begins” and “Taken.” Neeson’s had a tough battle in his personal life, losing his wife to a freak accident. “Taken” was somewhat of a surprise hit a few years back, having first been released in Europe and then later in the United States. “Taken” showed that even an actor in his mid-fifties can still be an action star and headline a very engaging, challenging role. Obviously this raised some eyebrows and we know have “Unknown.” While this isn’t exactly the same film as “Taken”, it’s most assuredly in the same genre. This 6’4″ Irish former boxer has tackled a variety of roles from Oskar Schindler to Michael Collins to Alfred Kinsey. That’s quite an impressive range right there. Let’s delve into the unknown and see what it’s all about.

Neeson plays Dr. Martin Harris, a Biomedical scientist, who’s set to attend a lecture in Berlin. He forgets his briefcase at the airport, hails a cab to go get it but is no sooner involved in a car crash where he bumps his head. He awakens four days later remembering fragments of his episode, but checks himself out to find his wife (January Jones). When he does eventually track her down, he’s astounded to find that she has no recollection of him. Add to that that her husband, Dr. Martin Harris (Aidan Quinn), isn’t too happy about the whole situation. Harris manages to track down the cab driver who was driving when the accident happened (Diane Kruger) and she unwillingly helps him. He finds a dead end at nearly every turn, but Harris finally starts to piece the puzzle together. Is he really Dr. Martin Harris and if not – who is he?

It’s a bit tough in a movie like this to give a detailed plot synopsis without giving away anything too big, but I think I might have pulled it off! “Unknown” is a gripping movie and having never suffered amnesia, I can’t really sympathize with what the characters are experiencing. I will say that I enjoyed “Taken” a bit more as it’s a bit more engaging. Neeson’s character there is driven by pure rage and motivation whereas here it’s intrigue and determination. “Unknown” has elements from other films like “Charade” and “The Bourne Identity” that seem to make this work. The supporting cast does a fine job here, especially Diane Kruger who might seem familiar from the “National Treasure” films. Fans of “Taken” will enjoy this as it’s somewhat more of the same, but even if you’re not a fan of Neeson – this one has enough to keep audiences entertained and engaged throughout.

I’d just watched “Batman Begins” earlier in the day before I popped in “Unknown.” Granted “Batman Begins” was one of the initial offerings on the then fledgling Blu-ray format, but it still looked good. What I’m getting at is that a mere five years later it’s amazing how good a new Blu-ray movie can look. “Unknown” has a very stylized look about it and the harsh Berlin winter is felt in the greyness of the images. The 2.40:1 AVC HD transfer simply sparkles from beginning to end. A majority of the scenes, especially those later in the movie, have a greenish hue to them giving it a very unique look and feel. Detail is amazing; we can see every forehead wrinkle in Liam Neeson’s face. The aerial shots of Berlin feel like you can see what’s going on in each and every window. I was amazed at how good this looks.

Nearly as impressive as how this movie looks is how it sounds. The DTS HD Master Audio soundtrack has some genuine amazing moments. Dialogue is at the heart of the film and though Neeson has a tendency to whisper some of his lines, I never felt challenged as to hearing them or not. The car crash at the beginning of the film sounds amazing and there’s a fairly lengthy car chase scene in the middle of the film – all of which brings all of the speakers to life. Surrounds almost always seem to spurt out something adding to the ambiance. This is a great example of how a good soundtrack can really amplify a movie.

Unfortunately we don’t get a lot in the supplemental department here. Included are two featurettes, both of which literally repeat about half of the same information and lines. We get some interviews with Liam Neeson and company and the challenge of doing an action movie in his 50’s. This is about as EPK as you can get and the only thing I really learned is that Neeson used to be a boxer in Ireland in his teenage years and had a brief (as in three minute) bout with amnesia which is “…what led him to the script.” The second disc is a digital copy for your portable device. 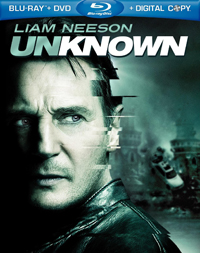