It’s a strange thing when a well-known actor dies and, more to the point, dies before his time.  It’s sad to lose Hollywood legends like Lauren Bacall, but she lived a rich, full life and I’d say she had very little, if any, regrets. However we lost two well-known actors in 2014 and two Academy Award winning actors at that. Both Robin Williams and Phillip Seymour Hoffman died before their time and no telling how many more stellar performances they had in them. Hoffman’s career was littered with amazing roles and ones that really didn’t get the attention they deserved. Yes it was fun to see him hoot and holler his way through Twister, but what of the isolated character he played in Happiness, the happy-go-lucky friend in Along Came Polly or his conflicted Scotty J in Boogie Nights? A Most Wanted Man is Phillip Seymour Hoffman’s last leading role. There will be no more. And, amazingly enough, he seemed to be getting better with age and it’s that realization that makes his death so much more difficult to accept. Still, his performance might even garner him a posthumous Oscar nomination. Though I’ve never been too big on spy movies, Anton Corbijn has managed to craft a believable thriller in the vein of Tinker Taylor Soldier Spy and The Constant Gardner.

We meet Issa Karpov (Gregory Dobrgin), a half-Chechen, half-Russian who has found his way to Hamburg, Germany. Issa, whose nationality alone is enough to raise more than one red flag, has caught the attention of Günther Bachmann (Philip Seymour Hoffman), an “old school” German intelligence agent, as well as his team.  We learn that Karpov’s motivations for being in Hamburg is that the Russians have deemed him a terrorist and his subsequent name change hasn’t granted him any favors.  Günther and his team, naturally assume the worst. Karpov enlists the help of a social services lawyer (Rachel McAdams, good in her role but miscast) as he’s attempting to secure some funds from a private banker (Willem Dafoe). Added to all of this are the Americans, led by CIA operative Martha Sullivan (Robin Wright). As is typical of John le Carré’s novels, it’s hard to trust anyone and the cat and mouse game is in full effect here.

I’ll come out and say that if you’re looking for a nail-biting, action-packed thriller that’ll have you sweating through your shirt – well this probably isn’t the movie for you. A Most Wanted Man harkens back to the days of the 60’s and 70’s and the “Cold War” era of spy thrillers. That aside, the performances in the film are amazing, save Rachel McAdams. I don’t think that she does a bad job, just miscast. I’ll always picture her a “Mean Girl” if you will.  As for Hoffman, this performance is so subdued, yet so powerful that it’s still running through my mind a day later. He’s a hard-drinking, chain-smoking down-on-his-luck intelligence agent, but he manages to pull off an amazing performance. The supporting cast, namely Dafoe, all do their part to make the film taut and tense and memorable.  There’s not a lot of action in the film, but if you’re patient and give it a chance (and if you’re a fan of spy thrillers) then this is as good a film as any to see how truly amazing Phillip Seymour Hoffman was.  Recommended.

The look and feel of this film took me back to Stephen Soderbergh’s Traffic in which the three parts of the film had very different hues: yellow, blue and grey.  So too is A Most Wanted Man in which the hand held camera might be distracting to some.  The 2.35:1 AVC HD image manages to pull off a razor sharp transfer while adequately conveying equal parts of corporate bluish scenes with scenes of yellowish hues and others in the deep blacks of the world of espionage.  That sound a bit confusing, I’m sure, but it’s something that needs to be seen to be appreciated. Hoffman didn’t look that great in this film, his skin was pale and pasty, his character chain smokes and drinks scotch like it’s going out of style and this is conveyed with the detail in the image. Wrinkles aren’t hidden, hair is askew, though the overall look and feel of the film is second to none. It’s an interesting-looking film and Lionsgate’s Blu-ray does it justice.

Though the Blu-ray contains a DTS HD Master Audio track, sadly it’s nearly wasted. As I mentioned above, there isn’t a lot of action in the film. There aren’t any shootouts in the street, no high energy car chases throughout Hamburg or anything that will really challenge your speakers. The film is very dialogue driven and, as such, the vocals do come through with the utmost clarity. Hoffman’s German accent is certainly believable and what little ambiance there is shows in the front speakers. There are some elements that emit from the surrounds, but not to great effect. It’s a good-sounding mix, but it makes certain that your attention is focused on what’s happening on screen.

Unfortunately there aren’t a lot of extras for Hoffman’s final leading role, but what’s included isn’t all bad. 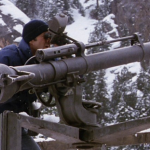