These days I’m always excited to discover some smaller films getting a theatrical release. Enter: Watcher. I only discovered it the week of its release when I looked ahead at what films were coming to theaters. I glanced at a few positive reviews (Keyword: glance as I wanted to go in fresh) and devoted a Friday evening to checking it out. To get right to it, I am glad I did as it offers a mostly effective, somewhat slow-burn horror film that gets more than enough right to make for some effective scares. It might not be one you’ll revisit too often, but for those looking for some good counter-programing to the norm then this should fill that void.

Francis (Karl Glusman) and his wife, Julia (Maika Monroe) have just recently relocated to Romania due to Francis’s recent promotion. Julia has done some acting, but mostly is relaxing and spends her days using a translator tool on her phone to help with the recent move. Julia tends to stare out the window of her apartment quite often. It is discovered that there is a serial killer who is dubbed “The Spider”. This leads Julia to believe that a man she sees staring out the apartment window constantly, could very well be the killer. Hear paranoia leads her to suspect that she is being stalked. The film makes great use of a lead character in unfamiliar territory. When your lead character can’t always express what she’s afraid of it can be quite problematic.

Many directors have tackled films of this sort. Certainly, Brian De Palma comes to mind, Spielberg and you can throw in Hitchcock as well. I enjoy films of this sort when they are done right, and indeed, Watcher is. It might be a bit slow for some, but the constant dread and eventual payoff make it worth the ride. One of the things I appreciated about it was that it doesn’t abandon the basic premise and remains mostly realistic to the world it creates. What I mean by this is one point in the film, Julia suspects a shopper in a grocery store is the man stalking her. Instead of throwing some absurd plot twist at us, we see that that the store clerk let she and her husband watch the security footage. Another moment is when they decide to call the police and the officer helps them try and handle the situation. A lesser film might’ve taken a different route, and I appreciated this aspect. It shows the restraint that other filmmakers might’ve lacked given similar material. I realize I haven’t even mentioned the villain, or I should say, suspected villain played by Burn Gorman. He, like Maika Monroe in the lead role, gives an equally effective performance. A few key scenes with him simply extending his hand are quite unsettling. And unsettling would be the perfect word to describe much of the film. It accomplishes a lot in its brief running time. It can feel longer, but it still uses the time wisely. Even up to the final moments, it had me. It presents a simple plot with a few characters and takes us along for quite a ride. This one is well worth checking out.

Is it me or are we seeing more films shown in this “goldilocks” aspect ratio of 2.00:1? If 2.39:1 is too wide and 1.78:1 is too narrow this should fit the bill, yes? Anyway, it’s just the way my mind works. I will say that this works for this film – it creates a more intimate mood rather than a broad, wider scope film. The color palette struck me as being rather unique – several scenes have a candy-colored ambiance to them which really gives the film a unique look and feel. It’s a muted visual appearance, to be sure, but I rather liked it. This isn’t a “bright and sunny” kind of film both in tone or physically, though I feel that the atmosphere of Bucharest is adequately portrayed. It’s a good-looking picture.

The included DTS HD Master Audio mix certainly has a presence, though it’s nothing overpowering that’ll have you turning down the volume anytime soon. Vocals are sharp and crisp, though I found them a bit on the soft side in a few scenes. Surround effects are present as well, though they do add a few bits of tension to a few key scenes (the one on the train/subway comes to mind). Nathan Halpern’s intoxicatingly haunting score only adds fuel to the fire that this movie takes full advantage of. I had no complaints with the way this sounded – neither should you.

There are things that this review can’t touch on as effectively as sitting down to watch this film, but it is a more than effective entry into the horror genre. It gets so much right that I wish more filmmakers would take this subtle approach. It preys on that fear of the unknown and features solid performances and strong direction to make for a fun night at the movies. Check it out. 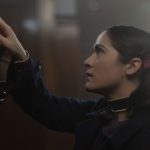 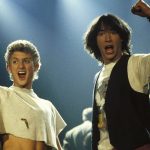