Hedwig (John Cameron Mitchell) is a drag queen from East Berlin, but he was born as Hansel and has been through some rough times. As a young man, he fell in love with an American soldier and in order to marry him, he underwent a sex change operation. But the process was botched and he was left with a one inch mound of flesh, as opposed to a penis, vagina, or anything resembling either of those organs. Now some time has passed and Hedwig, with her band The Angry Inch, has embarked on a tour of seafood diners, where she performs her famous tunes and of course, shares some of her life’s woes. At the same time, her former lover and current rock sensation Tommy Gnosis (Michael Pitt) is also on a tour, but his is more popular, thanks to Hedwig. But Hedwig didn’t mean to propel his career at the expense of her own, it happened by crooked means. When Gnosis left Hedwig, he stole all of her musical numbers and now uses them himself, which is why he has rocketed to fame and Hedwig tours seafood dives. Perhaps Hedwig can find some solace as she pours out her soul, or will she simply find more torment?

The era of the musical has long since passed, but some rare efforts are still made to bring them to the screen, often with miserable results. By the same token, some great ones have also surfaced since the demise of the genre, such as Rocky Horror Picture Show. Although Hedwig and The Angry Inch is in a different vein than that film, it has broken the cycle of poor musicals and proved that good ones can be still be produced. Hedwig played as a stage production for over two years off-Broadway and now has hit the screen, complete with all the trimmings you’d expect from such quirky material. As Hedwig co-creator John Cameron Mitchell serves as writer, director, and lead performer, the same sense of style is brought to this screen adaptation and man, what an effort by Mitchell and his cast & crew here. The word that comes to mind most with this film is unique, as in every aspect of its being, I can’t think of another film that it’s close to, aside from being a musical, of course. I can’t praise this movie enough, it has offbeat and well-written characters, excellent musical numbers, terrific performances, a sharply penned batch of dialogue, and wonderful visuals, all tied into one cohesive, enjoyable package.

In the lead here is John Cameron Mitchell, who plays Hedwig with immense skill and supplies a wonderful overall performance. Mitchell has done his share of acting prior to this, with multiple television, screen, and stage efforts, but I think this is his definitive turn, without a shadow of a doubt. He brings Hedwig to life with such energy and passion, which is vital in a film like this, where the main focus is placed on a sole character. As if his acting wasn’t enough to praise, Mitchell also co wrote the story and screenplay for Hedwig and The Angry Inch and made his feature film debut as a director, quite a lot of tasks, to be sure. Even so, Mitchell delivers on all front and as a result, this movie is loaded with charm, dazzling visuals, and memorable characters.

It’s been a while since I’ve seen this film. In fact, I think the last time I saw it was when it came out on New Line’s DVD. But once Criterion gets their hands on something, rest assured that it’ll look the best it possibly can.

This new digital transfer was created in 16-bit 4K resolution on a Lasergraphics Director film scanner from the 35mm original camera negative and a 35mm interpositive. Thousands of instances of dirt, debris, scratches, splices, and warps were manually removed using MTI Film’s DRS, while Digital Vision’s Phoenix was used for jitter, flicker, and small dirt. The original 5.1 surround soundtrack was provided by Warner Bros.

The film’s lush, intense color scheme is well preserved here, with bold hues and vivid shades throughout, but no bleeds or such in the least, while flesh tones seem natural also. I saw no real flaws with the contrast either, as detail remains high and black levels always seem stark and well-balanced. The film’s low budget origins sometimes creep in, but too often and on the whole, this is an excellent visual effort.

The Dolby Digital (and DTS) soundtracks have both been replaced by a new DTS HD Master Audio mix. And as such, the music sounds excellent and better than I ever expected, given the film’s low budget roots. The songs come through in rich, full form at all times, though the surround presence isn’t as distinct as I would like. But this is due to the source material and not these mixes, so there’s no reason to complain too much. The rest of the audio is well presented also, with clean and crisp dialogue and no issues with the sound effects, aside from being a little forced at times, though never to an extreme degree.

New Line’s Platinum Series DVD had a fairly good selection of supplements, but Criterion has added some new ones. Let’s take a look.

No, this really isn’t the “new” Rocky Horror Picture Show, but I suppose it could and/or might do in a pinch. The LBTGQ community has come a long way since this film’s release back in 2001. No doubt this is why Criterion added it to their collection. The movie isn’t for everyone, but all of Criterion’s usual caveats apply: it looks and sounds the best it ever has, previous supplements are included and new ones have been added. If you’re a fan, this one is a no-brainer. 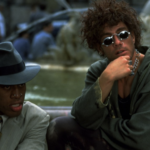 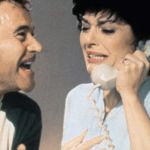