In all of the world cinema that I try to watch at home, the cinema that I have seen the least is German cinema. That said, I am a big fan of Werner Herzog and this year watched my first Rainer Werner Fassbender film. So, I could be further off base. To be honest, I have owned both Paris,Texas and Wings of Desire on Blu-ray for roughly a year, and just have not been ready to see the films. Part of it is the length of the films, which both run over two hours. The rest was just the waiting game for a great reason to get into Wim Wenders films. That reason arrived on my doorstep this week in the form of The American Friend.

It could not have arrived at a better time. I have recently been on a bit of a Patricia Highsmith kick, having watched both Plein Soleil and The Two Faces of January in the last few months. Highsmith is best known for writing the character of Tom Ripley, the charming sociopath of The Talented Mr. Ripley and four other novels, and for writing Strangers on a Train. When I read that The American Friend was based on Ripley’s Game I was intrigued.

The film follows Jonathan Zimmerman (Bruno Ganz,) a craftsman and art framing afficionado with a unique and debilitating blood disease. At an art auction, Jonathan encounters Tom Ripley (Dennis Hopper.) Ripley overhears Jonathan expressing that the art piece that Ripley has brought to auction is a fake. Jonathan also intentionally refuses to shake Ripley’s hand when they meet. This chance encounter pulls the men into each other’s lives. Ripley comes by his business to have Jonathan frame a piece for him. Meanwhile, Jonathan is approached by one of Ripley’s associates with a strange offer. The man informs Jonathan that the disease is worse than the doctor has let on, and he will pay him thousands of dollars to kill a man for him. The film follows a logical progression from this encounter.

The American Friend is an extremely interesting film. It is a thriller written by an American ex-pat living in Paris, directed loosely by a German director of the New German film movement, starring an improvisational drug taking rebel from the subversive American film movement. So, it’s super interesting. And it actually works.

The film is beautifully shot with the extremely talented Robby Muller as cinematographer (known for Jim Jarmusch films.) The actors turn in great and unexpected performances. Hopper is definitely not how Highsmith envisioned Ripley, but he brings something so interesting to the role that it doesn’t matter at all. Bruno Ganz is fantastic as the dying family man thrown into a life of intrigue. On top of that, Wenders makes a ton of interesting choices. For example, instead of trained actors to play these sort of gangster characters, he chose to cast film directors! So the film features Samuel Fuller (White Dog, The Big Red One) and Nicholas Ray (Rebel Without a Cause.) The film includes a train sequence that film students are not going to believe.

This film easily could have fallen under the weight of the differing ideas that went into it, but instead perseveres. It is very unlike any thriller that I can recall. In other words, I love it. I will be watching those copies of Paris, Texas and Wings of Desire after all!

This is an incredibly impressive video transfer from Criterion. Criterion decided to make this one of the most attractive films in their catalog with a true 4K transfer. This film looks better on Blu-ray than most releases that came out this year. Fine detail is outstanding and grain is very rarely visible. Clarity is for the most part perfect. Any softness in the film is simply due to equipment constraints, but this is so rare that I am scratching my head to remember anything noticeable. Fans of the film will be very hard pressed to find a better transfer of this film. I don’t know what they could have done better.

Similar to the video, this DTS-HD Surround 5.1 track is very high quality. There is nothing bad to report whatsoever in this department although dynamic range is limited, because the film was originally recorded in Mono. Dialogue is incredibly clear and crisp. The music in the film sounds great and the surround really opens it up. I did not notice any pops or hiss or distortion. I can not think of any need for improvement here, although anybody thinking this will be a true surround track like in modern surround may be confused by the lack of immersion.

I had no idea what to expect from The American Friend, and that turned out to be a good thing. The movie manages to work brilliantly, despite the madness of the pairing offered. Criterion has provided some incredible supplements. This will always be the film that turned me onto Wim Wenders. I look forward to watching more of his films in the future. I highly recommend checking this one out!. It’s some sort of a low key classic. 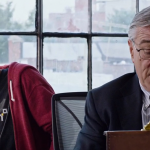 The Intern (Blu-ray)
Next Article 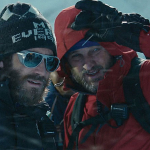