A group of talented martial artists want to break into the movie business, but little do they know getting into Hollywood will be their toughest battle ever. After a rich American businessman invites them to compete with similar groups for a spot as a premier stunt team, they venture to the United States. Of course, they’re able to show up the competition and their fate as stunt stars seems certain, but not all is as it seems. The businessman is just one of numerous wealthy parties who gather skilled fighters, make false promises, and watch them engage in combat. Soon enough, the situation turns even more dire when one of the group is kidnapped, forcing the rest to stage a daring rescue. As gifted as these warriors are, can they overcome not only the other combatants, but the powerful men who run this shameful enterprise?

If you have even a casual interest in action movies, stop reading this review and go watch this movie. BKO is an insane, over the top madhouse of some of the best fight scenes you’ll see. Not one, two, or three fight sequences either, but one awesome fight after another, until the credits roll. As you’d expect from a film with Panna Rittikrai involved, the fights are simply badass, with intricate, pinpoint choreography that never fails to dazzle. This movie seriously raises the bar for action movies and makes Hollywood’s efforts look like an episode of Bumfights. All this action comes at a cost, as the story is thin and character development is minimal, but the ends justify the means. And besides, this isn’t just an action movie, this is a balls-to-the-wall action spectacular, so I can cope with a thin plot. Aside from more praise for the insane fights on showcase, I don’t have much else to report about BKO, it is just one kick ass cinematic experience. So if you like action movies even a tiny bit, BKO: Bangkok Knockout is a movie you will not to miss and you’ll kick your own ass if you do.

BKO: Bangkok Knockout is presented in 1.78:1 anamorphic widescreen. This transfer looks good, but these epic battles just beg to be seen in high definition. The colors are bright and vivid, while contrast is stark and consistent So the visuals here are solid and while not razor sharp, detail is strong as far as DVD goes. I do think a lot is lost in the resolution loss here, as the visuals are intricate and detail should pop off the screen in hi-def. But if you’re adding to your DVD collection, this disc looks quite good.

This Dolby Digital 5.1 soundtrack (which preserves the original Thai language track) is more than solid, but doesn’t really live up to the wild action scenes. There is decent presence, but the impact seems weak, which is a let down. But even so, the audio sounds passable and isn’t plagued by errors, so its hard to complain that much. The dialogue is clear and the musical soundtrack has a lot of life, so the surrounds do get to ramp up here and there. My lone complaint is that the fight scenes could benefit from a more visceral mix, but aside from that, this is a rock solid soundtrack. This disc also includes an English language track, as well as subtitles in English and Spanish.

This disc includes two promotional featurettes, as well as the film’s trailer. 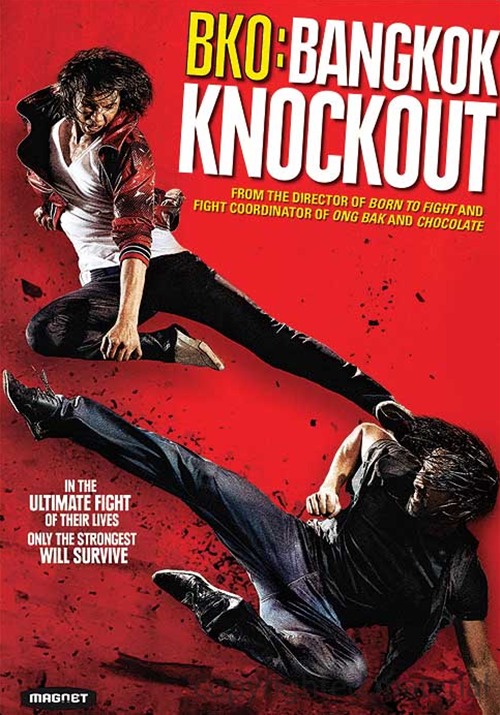