Rags Town is a place people go to escape their past, the kind of town where no one asks many questions. This is where Shu lives and operates his detective agency, along with his brother Akira and two beautiful ladies, Manami and Ayaka. While Rags Town is the sort of place where unusual isn’t that unusual, the cases Shu works are considered unusual even there. Shu is able to read people quite well, discern the truth from lies, and knows just what to say in order to find out what he wants. But this case will test even his skills and then some. He is tasked to watch over a young girl named Sara, who has some odd abilities and is shrouded in mystery, to say the least. But there are people who want to take Sara for themselves, so Shu and his associates will have to work hard to find some answers and uncover the truth about Sara.

This anime series has it all, from action to drama to humor, with a pretty good story to contain all the elements. I was most impressed with the characters, as some great ones are crafted within Glass Maiden. Of course, the nature of the story prevents us from knowing a lot about them, but perhaps that works in the series’ favor. After all, sometimes it is best to leave some elements to the imagination and that certainly seems to work here. The story turns out to be a solid detective yarn with some nice twists, all driven by those terrific characters I just mentioned. You might think with all kinds of different elements in play, Glass Maiden seems inconsistent, but that isn’t the case. Even when the show switches from humor to a more serious tone, the transition is smooth and never veers the story off course. So if you’re a fan of detective stories or anime in general, Glass Maiden is well recommended.

The episodes are presented in 1.78:1 anamorphic widescreen. The show looks excellent, with clear visuals and accurate color replication. The image is not as refined as an HD version of course, but it still shows solid detail and the animation looks great in this treatment. No issues with the colors either, as hues look as intended and black levels are spot on. In the end, this is a terrific visual presentation.

The sole soundtrack is the original Japanese language track, which sounds quite good. This 2.0 option isn’t going to bowl over your ears, but it sounds clean and clear. The dialogue is at a proper volume, while the music provides some depth and the sound effects are well handled. Not the most flashy soundtrack you’ll find, but rock solid and effective. This release also includes English subtitles. 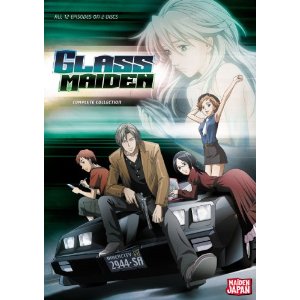