Brooke Marks is the star of her own webcast, where her mean spirited diatribes draw in numerous viewers, including some who don’t appreciate her rhetoric. She wasn’t always a bitch in her video blogs, but since her attitude got her more attention, she stuck with the bitch persona. When she isn’t on the web, she is just as catty toward other women and indulges in promiscuous sexual behavior. Although her webcasts have a lot of folks tuned in, one of her admirers is more interested in her than the others, to the point of obsession, in fact. Her stalker is able to remain anonymous, but still interject themselves into Brooke’s life. As tragic, violent events begin to erupt around her, Brooke is thrown into a whirlwind of danger and chaos. As the cyber-stalker closes in on Brooke, will her final webcast be one that her viewers will never forget?

I was impressed with VLOG. The film runs a scant seventy minutes, but the filmmakers put each second to good use and the result is remarkable. This is not a “watch out for the internet” kind of movie either, so don’t expect a lesson in cyber safety or a moral lesson about on-line hookups. VLOG is quick and razor sharp, with ample gore and naked flesh, but these elements are woven into the plot, not a common instance. So while not a social primer, VLOG is also not a mindless slasher movie, as the sex and violence is part of the story, not tacked on for cheap thrills. The final run of scenes is intense and memorable, though I am not sure VLOG will hold up to repeated sessions. But it is a terrific movie and a great example of how to make a tight, effective genre picture, free from the usual cliches and shortcuts. While the content is going to scare some people off, VLOG is a well made, potent thriller that is well worth checking out.

VLOG is presented in 1.78:1 anamorphic widescreen. This is a good looking transfer, one that maintains the film’s visual design. The image is a touch inconsistent, but that is part of the visual approach taken. So a sharp, faithful visual effort, not much else we could ask of this treatment.

A Dolby Digital 5.1 soundtrack is included and while memorable, the track serves the material well. The surrounds might not be active all that often, but the basics are covered and the movie sounds fine. All of the needed elements line up and the film’s eerie mood is enhanced. This disc also includes English subtitles.

This disc includes some bonus video blogs from Brooke Marks. 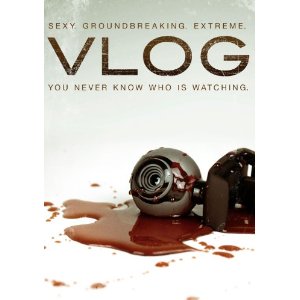