Among all of the films that the late Audrey Hepburn made, there are two that fit synonymously with her and her characters. One, “My Fair Lady” and the other “Breakfast at Tiffany’s”. Widely considered to be one of the more popular romance movies of all time; it charted the ways for the likes of many, many more to come (romantic comedies, that is). Even the box art is synonymous with the movie, all you have to do is look at it and you immediately think “Breakfast at Tiffany’s”…Also starring in this classic is George Peppard. Now if you’re like me, you associate George Peppard with the cigar-chomping ex-Vietnam vet who always said “I love it when a plan comes together” from TV’s “The A Team”. But like most actors, he had experience in movies and this is certainly one of his most notable performances.

We meet Holly Golightly (Audrey Hepburn) as the opening credits appear, peering into a store front window, and yes it’s the world famous Tiffany’s. Dressed in her best, she makes her way back to her apartment, bare it might be, she manages to wind down from yet another of her long nights. We also meet Mickey Rooney’s character who adds quite a bit of comic relief to the film. He plays some sort of Japanese man who is angered by the slightest sound and is not too shy about yelling at Holly to “Keep it Quiet”! By some chance, Paul (George Peppard) happens to press the wrong buzzer to be let into his new apartment. They meet, and though it’s not really said, it’s love at first sight. We learn that Paul is a writer, who has written one mildly successful book and also get a glimpse as to what Holly is really like. Flighty as a bird, Holly is about as phony as they come. Never before have I heard so many uses for the word “Darling…” (let it roll of your tongue). What these two have isn’t exactly normal…Paul has a mistress that pays him for certain things and Holly goes out on more dates than she can count. It takes Paul a while to realize that he’s starting to fall for Holly, and the appearance of her husband (Buddy Ebsen) doesn’t help matters a whole lot.

Throughout the entire movie, Holly refers to Paul as Fred. Fred is the name of her brother of whom she is very fond of, but he’s serving time in the Army. After we find out a bit about Holly’s past (her name is really Lula Bell) and she has adopted kids and a family—she also used to be overweight, something which she definitely is not now…So now we have to get down to the heart of the movie, we all know and want Paul and Holly to get together, but it just doesn’t look like it will happen. They spend a day together that is probably one of the most memorable scenes in the movie. They do things they’ve never done before. For instance, Paul has some champagne at 9 AM, they steal things from a nickel and dime store and Holly goes into a library! Things look well for them, but this is before Holly finds yet another love interest.

“Breakfast at Tiffany’s” has become an American classic, the picture of Audrey Hepburn with that “cat ate the canary” smile, with her trademark hair and the long cigarette is one that strikes an instant image of the movie into whoever sees it. While it is considerably dated, I found it to be very entertaining and worthy of its “status” as a classic film. If you haven’t seen it, you’re missing out…though it may not change your life; it’s definitely worth a look.

“Breakfast at Tiffany’s” has had a few different incarnations on disc format and this is the first Blu-ray for the film. The 1.85:1 AVC HD image looks, by and large, good though there are some persistent problems. First there is some evidence of some DNR and while the intentions were good, the result isn’t. I’d much rather see a more natural-looking film than some feeble attempt to make a film look “better.” Now it’s not all bad, and truth be told there are only a handful of scenes in which I was really distracted. Still, I’ve seen what they can do with an older movie and it’s a shame that this one ended up looking the way it does.

The film has a pair of soundtracks, the DTS HD Master Audio mix which is a bit of a step up from the previous Dolby Digital 5.1 track found on the standard DVD’s. And there’s also a restored mono track. I was feeling nostalgic and chose the mono track, though I did listen to the DTS track in several places. This isn’t the strongest soundtrack in the world and truthfully the only thing that matters is the dialogue, well that and the Academy Award winning “Moon River.” With mono it’s easy as everything comes out of one channel. There are a few instances in which the surrounds get involved (on the DTS version), notably the ending scene in the rain. “Breakfast at Tiffany’s” isn’t the best-sounding Blu-ray out there, then again it’s not supposed to be.

This is the first foray for this title on Blu-ray and another reason to celebrate is that “Breakfast at Tiffany’s” is celebrating its fiftieth anniversary. The movie had a few different releases on standard DVD and while there are no new materials here, we do start off with a commentary track by Producer Richard Shepard. Shepard offers some insight into the production and his affection for Hepburn. Naturally he talks of the appeal of the movie and how it’s gone down in history as one of the more romantic movies ever made. There are also a handful of featurettes but the only one with any substance is “The Making of a Classic” which is a look back at the film. Also included are three others: “It’s so Audrey: A Style Icon”, “Audrey’s letter to Tiffany” and “Brilliance in a Blue Box” and I guess every man should know that the coveted “Tiffany Blue Box” is what women are really after – everything else is completely insignificant! There’s no denying that this movie has become a part of American Pop Culture and the iconic Audrey Hepburn has never looked better. 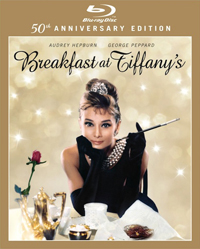