“This is an intelligent film for grown-ups.” – Nicholas Cage (as Nick Cage)

Having seen several thousand movies in my day, I have to say that those that are among my favorites are ones that don’t take themselves too seriously. For every The Godfather or Schindler’s List there’s a, well, The Unbearable Weight of Massive Talent. And then we’ve got Nicholas Cage. The Academy Award winner went onto become one of the bigger starts of the 90’s with roles in A-list films like Con-Air, The Rock, National Treasure and others. But his real-life financial problems forced him to take a different path and accept mostly direct-to-video roles. The irony in this is that he also has produced some of his more interesting work of his career. Films like Prisoners of the Ghostland, Mandy and Color Out of Space might not challenge your intellect, they downright mess with your head. Then again we are talking about Nicholas Cage. So we’ve got Nicholas Cage playing…Nick Cage (note: this isn’t a “himself” credit, he’s playing a fictionalized version of himself). How fun!

We meet Nick Cage (Nicholas Cage) as he’s looking for a new movie role. When this fails, he informs his agent (Neil Patrick Harris) that he’s ready to retire from the business. His life at home isn’t exactly stellar with his ex-wife, Olivia (Sharon Horgan) wishing he’d be a more attentive father to their daughter, Addy (Lily Sheen). Things are looking bleak and Cage reluctantly accepts an offer of $1 million to attend the birthday part of a fan, Javi (Pedro Pascal) in Spain. Javi is a super fan, to say the least, one of the film’s funnier moments is his memorabilia room devoted to the actor. Javi has written a script that he hopes Cage will star in. Complicating things are two FBI agents:  Vivian (Tiffany Haddish) and Martin (Ike Barinholtz). They inform him that Javi is a suspected crime lord who may have kidnapped a politician’s daughter to persuade his opponent to drop out of an upcoming election. Cage now has to help the FBI without being caught by Javi in the process.

There’s a lot to like here. And, lest we forget, Cage is a great actor. He’s become synonymous with his, uh, flamboyant acting style – but it’s also part of his charm. There are more than a few references to some of his past work and we even catch a few scenes from The Rock, Guarding Tess and Con-Air. Couple this with the fact that Cage spends a few scenes arguing with a younger version of himself (his character from Vampire’s Kiss) and he seems to be having a grand ‘ol time. The film works on a few levels: it’s a pretty good action movie, it works as a comedy and it serves the purpose of telling us that Nicholas Cage isn’t going anywhere anytime soon. If some of his more recent works aren’t your thing, I don’t see how any fan of Cage could turn this one down. It was a fun watch.

P.S. – There’s more than a few references to Paddington 2. If you’re moved to tears by it like the characters in the film – good for you.

From the sun-kissed skies of Los Angeles to the beautiful shores of Spain (actually the movie was filmed in Croatia, but you get the idea) the included 2.39:1 HEVC 4K transfer showcases some pretty awe-inspiring visuals. Detail is top notch, it’s possible to see every fake hair in Cage’s “hair” as well as the detail on his beard (ironically, this plays a part in a key scene later in the film). Colors are warm and brilliant and the HDR offers a bit more depth to the color spectrum. Nicholas Cage has never shone so well in 4K…until now!

Ok, so maybe this isn’t The Rock, Con-Air or Gone in 60 Seconds, but don’t let that fool you…the included Dolby Atmos mix packs quite the punch! While a majority of the movie relies on dialogue, things start to happen in the film’s last act and that’s where this mix takes front and center. Vocals are pleasing and natural, while I found that the LFE and rear surrounds combined for a nice aural experience. Believe it or not, the film features a car chase, bullets fired and the like. It’s a nice, well-rounded mix that’s not too “in your face” though is sure to satisfy.

It’s good to see Nicholas Cage (or Nick Cage, if you prefer) back at it. The actor and the filmmakers as a whole, don’t seem to take themselves too seriously and that’s what makes this so fun to watch. The disc sports some very eye-pleasing visuals, a Dolby Atmos soundtrack and a smattering of extras that make this one an easy recommendation to pick up. 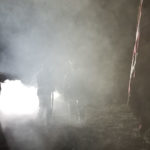 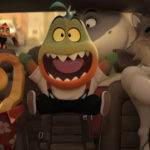