I remember it like it was yesterday. I was sixteen years old and reading a magazine about video games when an article mentioned a relatively unknown film called Battle Royale that had not found a distributor in the United States due to its graphic depiction of children killing each other. It was essentially Lord of the Flies with explosive necklaces and machine guns. After reading the brief synopsis I purchased the film on EBay on a VCD – not a DVD, a VCD, from Korea. This film quickly became one of my favorites, and I have watched it probably at least ten times, buying it on both DVD and Blu-Ray in later releases. Many people are familiar with the film now, due to the popularity of The Hunger Games, which borrowed liberally from it.

I have recently extolled the virtues of Arrow Video’s releases, and the reason I originally was turned on to Arrow Video was the release of a box set of Kinji Fukasaku’s Battles Without Honor and Humanity five film collection (also known as The Yakuza Papers,) released afterwards in stand-alone editions of the films. I had never heard of the films before, but after looking into it further I decided to splurge on the set. Once I review each of the films, I will give my opinion of the set overall in a subsequent review.

BWHAW begins explosively with an image of the nuclear cloud that decimated Hiroshima. The film takes place between 1949 and late 1950s. Japan has been decimated from the war. The former soldiers are in GI camps, where they are struggling to make a living post-war. Many turn to crime and become Yakuza, subservient to different families and clans. The film follows one veteran named Shozo Hirono as he navigates his way into one of the Yakuza families, just to see violence and paranoia destroy those around him.

The movie is swift, brutal, and very realistic. The main character at one point apologizes for an offense to another clan by cutting off his pinky finger. If you have seen the film Gomorrah, this film is similar in tone – feeling chaotic with characters not developed past the point of being a face in the crowd and possibly being murdered. Violence happens frequently in the film, and occasionally the film will feel a bit confusing for the first time viewer. The reason the film moves so swiftly through these characters that are hardly on screen before their demise is that the film is based on actual memoirs of a former Yakuza boss and reporters’ accounts. This lends the film an air of gravity and realism that is typically lacking in gangster films.

The film is great. The acting – especially by Bunta Sugawara – is fantastic for the most part. The film at some points is strangely funny – at least to my sensibilities – because there are numerous scenes where gangsters cry. The movie is a lot of fun to watch with a great score by Toshiaki Tsushima and fast paced directing by Kinji Fukasaku. It also taught me so much I didn’t know about Japan in the middle of the last century, and about Yakuza rituals.

I am very happy that Arrow Video brought this cool movie to the states. I highly recommend checking this one out.

Arrow Video did a fantastic job on the transfer of the film using an MPEG 4 AVC codec of a new 2K restoration. The transfer looks great overall. Occasional scenes looked a bit soft, but this could easily just be the nature of some of the focus in the scene. This is the closest an Arrow release has come visually to a Criterion collection release. I appreciate all the steps that Arrow Video took. It really shines on Blu-Ray because the film has a unique look. Imagine a film about 1950s postwar Japan filmed during the most exploitative era in Japanese film, and you will get a closer idea as to how fast paced and interesting this film looks.

The audio treatment of BWHAH was very good. Being a LPCM 2.0 track, it can be expected that range is severely limited. That said, this track is still pretty boisterous. The score by Toshiaki Tsushima is very engaging and fits the film like a glove. I really can not think of any problems that come to mind with this track. Arrow dedicated good time to getting this release right.

Battles Without Honor and Humanity is a great film and probably my favorite title I have purchased from Arrow Video so far. As with most Arrow Video releases,I would recommend renting it before a purchase to make sure it appeals to you if you have not seen the film. If you are a fan of the film, this edition should make you very happy with such great special features. I am looking forward to watching the next film – Hiroshima Death Match. 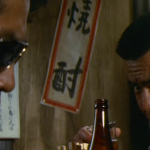 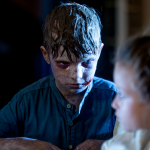