The story follows a young boy (Lewis) who is left at an orphanage practically from birth. He grows up with a passion to invent things. Day in and out he fails and never gets adopted but never gives up. As the movie goes on we find his main dream is to invent a time machine to find out who is mother was. At a science fair when he finally gets an invention to work (that shows what you are thinking on a TV in a particular period of time) a young boy, Wilbur, shows up and insists he is from the future and to watch out for “Bowler Hat Guy”. Anyway this Bowler Hat Guy destroys Lewis’ invention before he has a chance to show anyone and from there Wilbur gets Lewis to travel to the future with him, closely followed by the “Bowler Hat Guy” and the movie then takes a turning point.

CGI (Animation) – This is hard to judge here as i viewed the entire movie in 3D glasses, which i haven’t done before, however the animation was very similar to that of Jimmy Neutron: Boy Genius and was decent but not really anything new or groundbreaking. Definitely not up to Pixar’s high standards.

A lot of the jokes in this movie felt as if they were trying to be funny rather then funny but the Dinosaur (i’m sure most of you have seen him in the trailer) and the “Bowler Hat Guy” really steal the show. The “Bowler Hat Guy” was quite dimwitted and really clueless yet still remained the ultimate bad guy. He reminded me of doctor octopus from Spiderman in that he is controlled by another object (in this case a flying hat) The title suggests that you will get to know this entire ‘whacky’ family from the future but you really only get to know Wilbur and never any of the other characters at all as we don’t meet them until half way in the film (we get a 2 minute quick introduction which is fun but never goes anywhere else).

Overall this was a good movie for kids but i don’t think it will appeal to anyone over 20-25 like other CGI movies. It was quite fast paced, excellent animation and an admirable main character but as mentioned above it doesn’t really get anywhere, the plot does buildup rather well but never really takes off. Still a pretty good, colorful movie for kids with a decent story and a positive message behind it. Other than that there isn’t much new here but still a lot of fun to be had in its own right.

Presented in a 1.78:1 AVC HD transfer, is there anyone out there who thinks this won’t be the epitome of a perfect transfer? It is. As expected. All of the Pixar movies have received 5 star ratings in terms of video (and most for audio as well) and “Meet the Robinsons” is certainly no exception. The 2-D image is so crystal clear and sharp that I felt like I could reach out and touch the characters on screen. Colors are strikingly bold and sharp, black levels are right on the money and contrast is stellar. I could go on and on about this, but I’m telling you what you already know. This is a perfect example of how something should look on Blu-ray.

Just as pristine as the video is the DTS HD Master Audio soundtrack. Dialogue is crisp and sharp as a knife and the ensemble cast of voice actors is instantly recognizable (with both old and new faces). The LFE get their day in the sun and surround effects are spewing out something in most every scene. By and large the front stage handles the meat of the audio, but when it all works in cohesion it’s a beautiful thing. Like the video presentation, I could go on and on but suffice it to say that you’ll get your money’s worth out of your home theater setup with this one in the player.

As with the other 3D Blu-ray films we get everything that appeared on the regular Blu-ray with the additional bonus of a Blu-ray 3D disc. We get a featurette â€œInventing the Robinsonsâ€ as well as some deleted scenes, a few family games and two music videos â€“ one by the Jonas Brothers and the other by Rob Thomas. 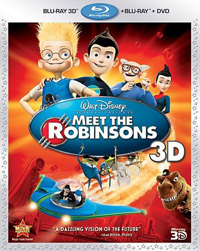